Ayn Rand's warped superheroes: Of course Zack Snyder's vision of "greatness" owes everything to "The Fountainhead" 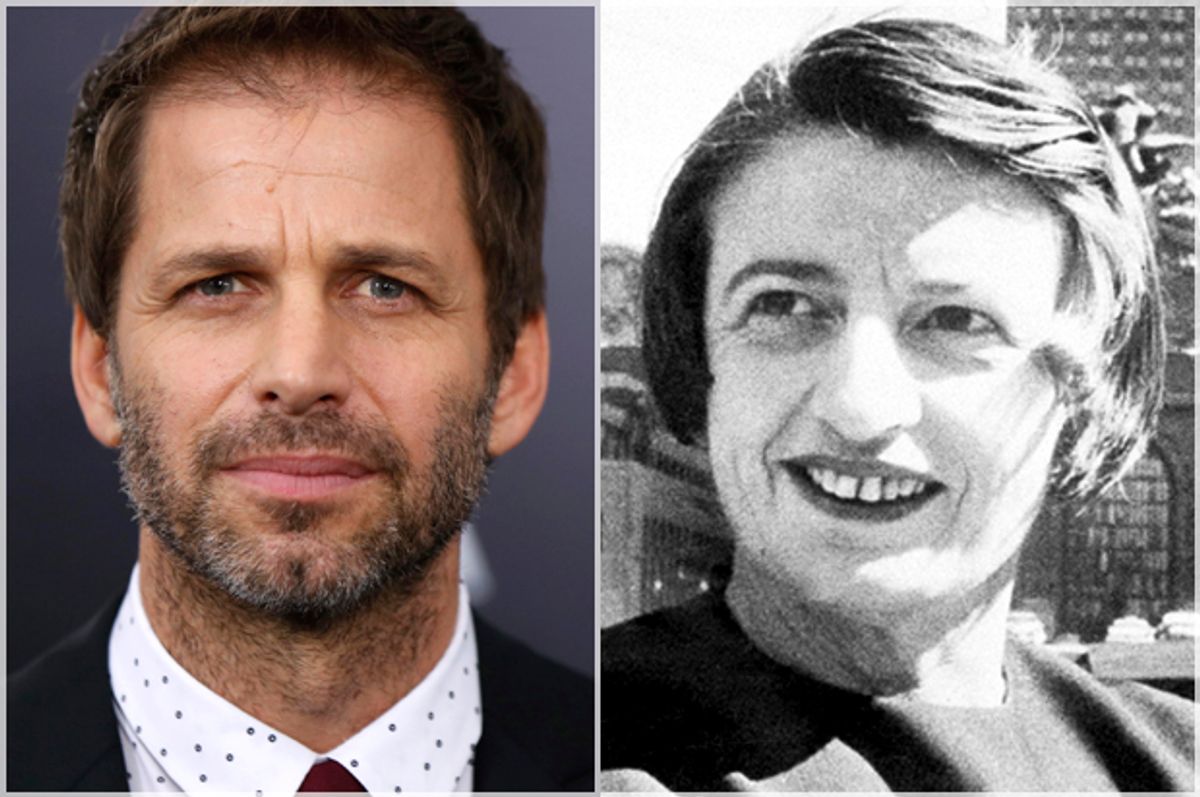 Zack Snyder's announcement on Thursday that he has "been working on [Ayn Rand's] 'The Fountainhead,'" because he's always "felt like 'The Fountainhead' was such a thesis on the creative process and what it is to create something" only surprised those who haven't been paying attention to Snyder's particular brand of formally derivative, philosophically empty film-making, in which rich comic-book tapestries are ripped from their panels and transformed into pointless spectacles of sex and violence.

His only successful comic book adaptation was of Frank Miller's "300," and its success was entirely predicated on the fact that it contained the same amount of ideological complexity as the average Trump supporter. Post-9/11 Frank Miller is the best object-lesson this side of Dennis Miller about how freaking-the-fuck-out isn't an appropriate reaction to a national tragedy, so when Snyder teamed up with Frank to make a film about the inherent evils of the inhuman once-and-future Iranians, alarm bells should have sounded.

But the real problem -- especially for someone who considers himself invested in the creative process -- is that Snyder took great pride in replicating panels from Miller's book. (Examples, they abound.) It's one thing to embrace one's inner T.S. Eliot and integrate your individual talent into the tradition, another entirely to be so dependent to the source material that you can't escape the gravity of its awful ideology, i.e. that noble, human Greeks were at war with dark, half-human Persians.

His slavish devotion to his source material reared its head again in his adaptation of Alan Moore and Dave Gibbons' magisterial "Watchmen." While I can appreciate Snyder's appreciation of what I believe to be the most exquisite panel composition in the history of the medium, there's a reason I concluded my exhaustive review of the film by comparing him to "a parrot trained to greet visitors with a hearty 'Hello! Good to see you!' It doesn't have a fucking clue what it's saying but somehow the audience is convinced it's language." Snyder fundamentally misunderstands the works he adapts, as can be evidenced by quickly comparing two scenes from "Watchmen."

When Nite Owl and Silk Spectre have sex aboard the Owlship to Leonard Cohen's "Hallelujah," they attack each other like rabbits who somehow know they're not long for this earth, and the result is about as sensuous as a comedic cut-away to a railroad train repeatedly going into and reversing out of a tunnel. But when the same pair break into prison to rescue Rorschach, Synder films their hallway fight scene in delicate slow-motion, so that the audience can see every rib crack, every arm snap, every expression on the faces of inmates being broken. Moore and Gibbons' book was about the need for connection and occasionally necessity of violence -- Snyder's film was about the mechanics of sexual intercourse and the sensual nature of violence.

That's not all Synder mangled, however, and his admission of admiration for Ayn Rand and objectivism offers insight into why he transformed the species-level threat from an alien invasion into the novel's "super man," Dr. Manhattan, who was transformed by an accident into a being who could experience time in a non-linear fashion and manipulate the universe at a molecular level. In the novel, Adrian Viedt, a.k.a. Ozymandias, a.k.a. the Smartest Man Alive, conspires to attack New York City with what appears to be an intergalactic teleporting squid monster; but in Snyder's film, the threat to Viedt's genius is Dr. Manhattan, who he drives from the planet by making it appear as if he caused the explosion that leveled New York City.

Adrian Viedt is a man of genius, and even though that genius is recognized, he knows and feels compelled to destroy Dr. Manhattan, who didn't earn his powers the way Viedt did his -- in other words, Adrian Roark, or Howard Viedt, or whatever you want to call him, is the classic Randian hero who uses his genius to topple those whose power and influence is undeserved.

Which is why, initially, it could seem strange that Snyder would have chosen to direct "Man of Steel" -- after all, whose powers are less earned than the man who only possesses them because he landed on a planet with a properly colored sun? But from the get-go, the historically awful "Man of Steel" demonstrated that Snyder is as incapable of understanding simple characters as he is complex ones, as evidenced by the scene early in the film in which Pa Kent implores young Clark not to save him and reveal his special special-ness to the world -- and Clark listens. After all, in the Randian interpretation of the universe, uniqueness must be a closely guarded secret, lest it be destroyed by the forces of mediocrity.

Great men perish in this fallen world not because their gifts aren't appreciated, but because they're recognized and hated for possessing them -- and if you've seen any trailers for "Batman v Superman: Dawn of Justice" it's fairly obvious that this is exactly what happened, and pitting Bruce Wayne's genius against Superman's uniqueness does little to mitigate the philosophical void at the heart of Snyder's work, inasmuch as Wayne's ability to transform himself into the Batman fits squarely within Rand's preferred narrative of self-creation.

After all, when it's Howard Roark-in-a-cape vs. Howard-Roark-in-a-cape, it doesn't take a special genius to figure out who's going to win what the trailer touts as "the greatest gladiator match in the history of the world":