"Being a full-time author sounds great at cocktail parties": Sean Beaudoin on his new story collection, and why he fantasizes about working at Starbucks

The author of "Welcome Thieves" on reviving old stories, learning to take criticism, and advice for upstart writers 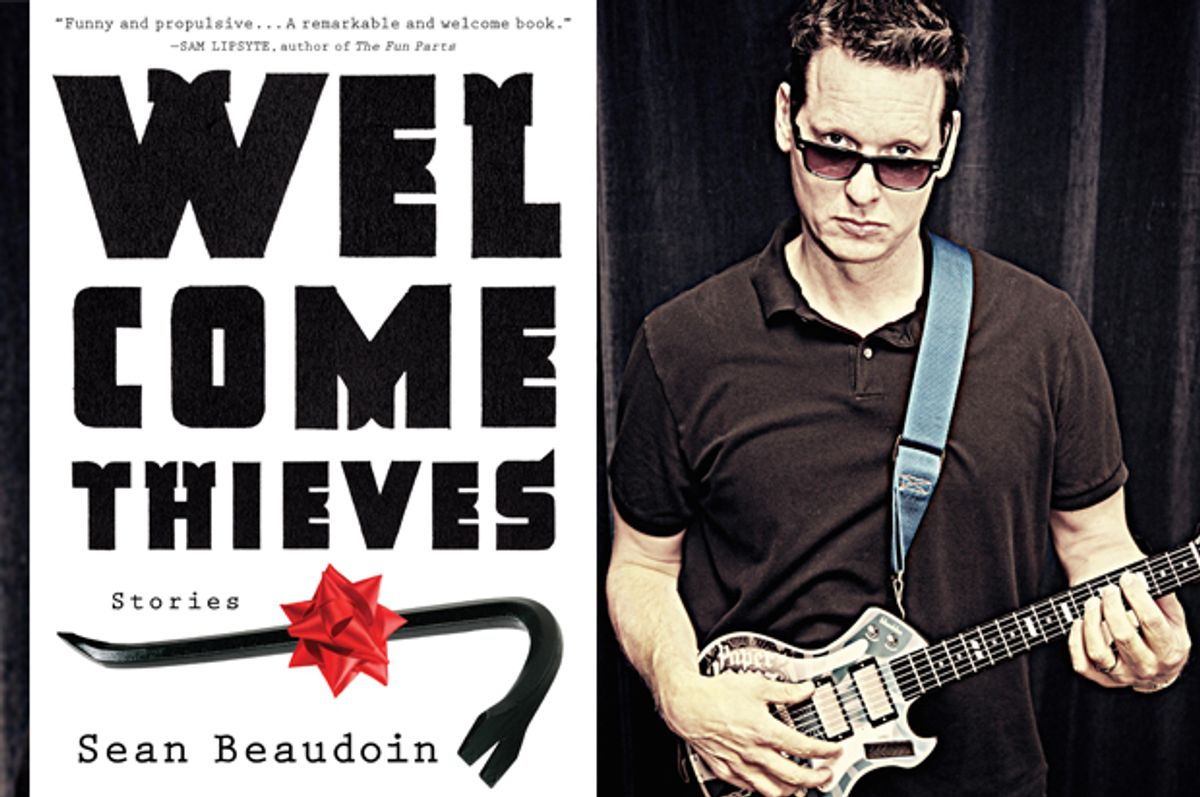 About six months ago, I was lucky enough to get an early look at Sean Beaudoin’s recently released story collection from Algonquin, "Welcome Thieves." Here is what I had to say upon my first reading: “Thrilling and mercilessly readable, the stories in "Welcome Thieves" go off like a string of firecrackers, sizzling and popping with a narrative velocity that is equal parts grit and polish. Beaudoin is definitely a writer to watch.” Having just opened a finished copy of "Welcome Thieves" this morning, I stand by those words.

Sean has a verbal acuity and a narrative range that are rare among contemporary writers. Though I’ve been continuously impressed and amused by the wry observations and incisive cultural commentary he delivers regularly online at the Weeklings, and I was obsessed with his old advice column at the Nervous Breakdown, "Ask the Dust," nothing prepared me for "Welcome Thieves." There are lines and stories in this collection that I’d wished I’d written myself, which as every writer knows, is the ultimate compliment.

I talked to Sean before our event together at Third Place Books in Seattle. We were tipsy. Here’s a transcript of our conversation, with the ums and hiccups edited out.

Every one of these stories has a different pitch, a different vibe, and yet they all have something in common: narrative momentum. They’re all written with an impressive economy. Were the early drafts this sleek, or was this something you arrived at during the editing process?

I've been revising/giving up hope on some of those stories for more than a decade. Every once in a while I'd pull one up on the laptop and do another draft, then stuff it away again. It's really only in the last few years that I started to feel like they were close to having arrived-- naked, dripping wet, stripped of all fat. Oddly, some of the newer ones seem to have the same effect without all the grind. Maybe I just figured out how to write. The rejections I got for the early versions hurt at the time, but it turns out they were pretty big favors.

It’s always a good sign when a writer appreciates editorial input, good or bad. Thin-skinned writers are doing themselves and the rest of us a disservice. Even when it hurts, good input is such a great tool. As a guy who hasn’t written short stories in a decade, and probably will never write another (read: I never felt I was much good at them), I’m always fascinated by the process, from conception to execution. As a novelist, I usually begin with character, and that character has an arc, and that arc serves as sort of a vague blueprint for the novel. Talk to me a little about what you’re thinking when you sit down to start a story.

In terms of editing, I completely agree. A lot of young writers will say, "I want you to be totally honest with me" when showing work to a friend or in class, but what they secretly mean is, "Tell me at length how much you love this and what a genius I am." I was certainly guilty of that sort of thing for a while. I think learning to receive criticism without being defensive or trolling for compliments is a vital muscle some people eventually develop and some don't. Sure, validation is great, but someone who is willing to dig into your dirt and find the little bones and roots and rotting leaves you've been glossing over draft after draft is a person who has earned being listened to without ego. Short fiction is so exacting that any reaction can be valuable, whether you agree with it or not. The funny thing about stories, though, is that you can show a collection to two people you respect, and invariably one will say, "Yeah, that one about the lime green Speedo? It rocked." And then the other will say, "You gotta lose the Speedo story, it's killing the collection." At that point I usually go for a few laps and then do what I was going to do all along anyway.

When I read these stories, it seems they share a common voice, I recognize a certain flair for storytelling, but is there a “glue” to "Welcome Thieves" in your mind, a collection of themes, or moods, that holds them all together? A common authorial motive, or ambition, perhaps? Or does each one occupy its own conceptual universe, and adhere to its own unique logic?

It's about relationships and how we inherently take from one another, emotionally and physically. Sometimes with malice. Sometimes because we don't know any better, completely unaware. It's about longing. For intimacy, for music, for the tiniest bit of recognition. It's about wanting to explode into something at full speed, expend yourself against an idea or a person or a concrete abutment. On the other hand, I think intention can be fluid. In a year it might seem like the glue is some other substance entirely.

You mentioned that some of these stories had been around in one form or another for as long as a decade, and that some of them had been rejected time and again. That seems courageous to me. I've always been afraid to go back and look at any of my unpublished work prior to my "debut," "All About Lulu," which was actually my eighth or ninth book. In fact, I literally buried much of the work, and salted the earth. What was that like, resuming work that you began producing when you were a younger man? Obviously, you've grown as a writer in the interim, but then, did there also exist some qualities in that younger writer that you admired, and sought to recapture? What was it about these stories that convinced you that they deserved further exploration?

Well, I have a 600-page crime novel on a disk somewhere that went unsold and will never be published. I haven't looked at it in many years, and probably never will again. So I totally understand the urge (necessity?) to just move on. Somehow it was different with these stories. Maybe it's obstinacy or self-delusion, but they nagged at me during the lonely Russian winters when I was working on other projects. I admire the discipline and stringency of a really solid story. The way it can deliver on a level that a novel often can't reach. I used to say in bars, to people only half-listening, that I wasn't giving up until I had at least one story under my belt that I didn't want to change a single line of. Not that I'd decided was finished but secretly knew wasn't very good, or kept submitting to journals with the hopes of wending through the slush instead of doing a dozen more drafts. I think stories and novels just exercise two different muscles, in the same way that writing is a solitary, antisocial pursuit but as an author you're also expected to be witty and charming at the podium. Maybe it takes 10 years of practicing scales to do both.

Oh man, I hear that. I feel like I have to wear four different hats to make my living as an author—and I don’t even teach. If I didn’t naturally have an outgoing personality, and a crazy fast metabolism, and a steady diet of beer fueling me, I doubt I could sustain a living, or sustain my art at all. The touring and public speaking stuff, along with the general day-to-day engaging in the literary ecosystem stuff (like this interview), would exhaust me. I wouldn’t have any juice left for the writing, or my kids. At which point, I’d be happier going back to landscaping. But at the end of the day, I feel like the extraneous stuff is in service of the art. You have kids, talk to me about the juggling act of managing your art, your career and your family.

I do sometimes fantasize about dropping the writing routine entirely and applying at Starbucks. To have set hours and funny co-workers and a repeatable list of tasks with an identifiable beginning and end would in many ways be a huge relief. Being a full-time author sounds great at cocktail parties and while surrounded by curious stewardesses, but the reality is that I work much harder, for more hours and less money than I have elsewhere. The highs of being paid for self-expression can definitely outweigh things like the promo circuit or reading snide comments about yourself on the Internet, but basically we're all narcissists and what else would we do? To loudly and repeatedly say, in a world where 100K books are published each year, "Listen to me! I've got some important insights and clever metaphors buried between obscure musical references that you really should read!" is pretty much indefensible. Which is just one reason why my next book is called "West of Forgiveness." Mainly, though, I feel incredibly lucky. Broken down to the smallest component parts: Playing with words is fun, and sometimes my sentences amuse people.

Also, as far as I've seen, you only ever wear one hat, and you're really good at it.

Yes, something I learned from Colonel Sanders: wear the same thing every day, and people will recognize you! He sells chicken, I sell books. We’re both shills. I think a lot of artists find the balance between art and commerce to be a tough dance. But when you’ve spent three decades systematically limiting every other viable financial option for yourself besides selling books for a living, and your kids need insurance, and clothing, and dolls that talk when you squeeze them, people might be surprised at how natural that dance becomes. And speaking of dances, I’m gonna end this thing by doing a dance you once did with me in a Weeklings interview. I’m gonna hit you with a rapid succession of questions, and I want you to answer them in 30 words or less.

Nineties-era fanzines about either Danzig conspiracy theories, or how a smart staple-and-folder should sell their Xerox stock and invest in ARPANET.

And one more—I’ll give you 50 words on this one. The single most valuable bit of advice you would give to an upstart writer with dreams of publication?

Take anything but writing classes in college. Graduate or not. Get a crap job that allows you to work just enough to pay your rent while finishing that first novel. Put it away in a drawer. Backpack through Southeast Asia for a year. If it's worth coming home for, it's probably worth another draft.

Jonathan Evison is the bestselling author of the award-winning novels "All About Lulu," "West of Here," "The Revised Fundamentals of Caregiving" (now a major motion picture starring Paul Rudd), and "This is Your Life, Harriet Chance!" Evison lives on the Olympic Peninsula in Washington State with his wife and two children. He has written for the New York Times, the Washington Post, the Wall Street Journal, Salon and National Public Radio.