David Wain, master of shorts: "I’ve always loved the challenge of what you can pack into a small package of time" 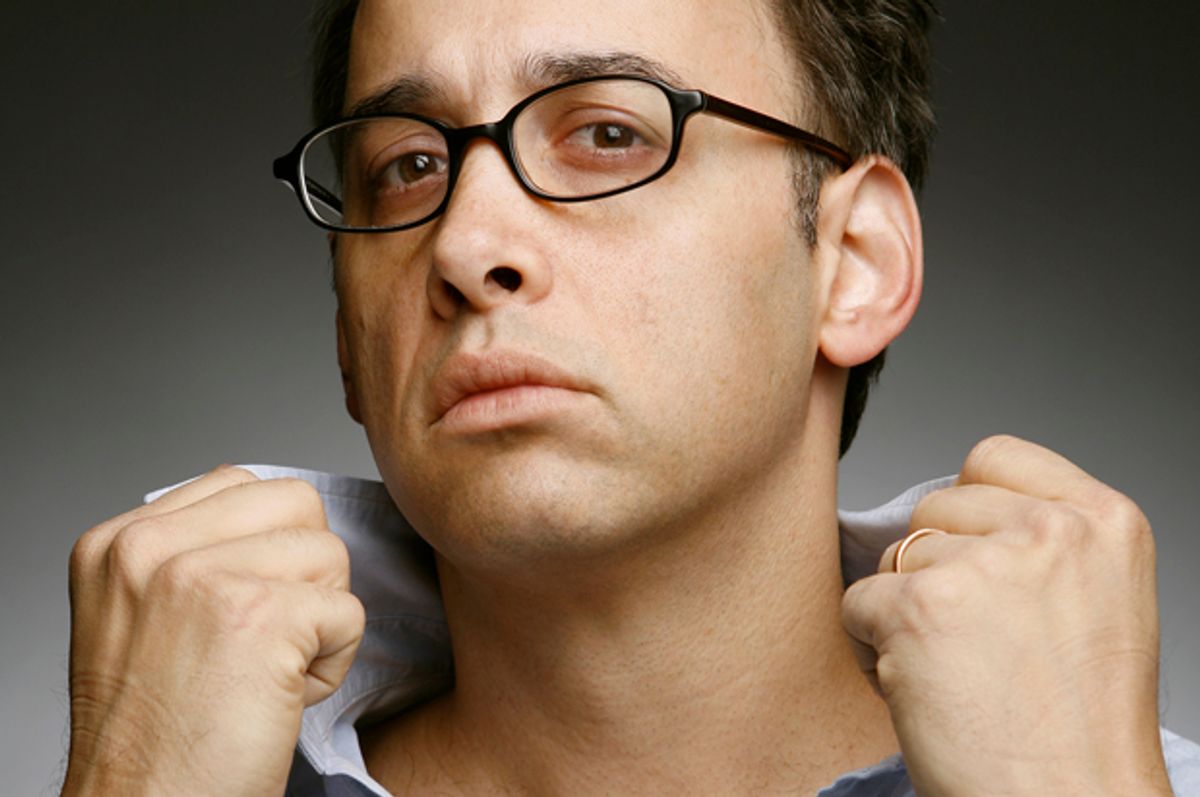 Writer, director, actor, and sketch comedian David Wain has worked with everyone you think is cool, often behind the scenes—he directed the cult classic “Wet Hot American Summer,” which recently came back to Netflix for a reunion series (“Wet Hot American Summer: First Day Of Camp”). And he's a veteran of “The State,” a sketch-group-turned-TV-show from the mid-'90s that produced some of the best on-air comedy of the era — on MTV, no less. Ever since then, Wain has been collaborating with his friends and colleagues on projects that are always shot through with a kind of gleeful enthusiasm for the flexible bounds of sketch comedy and the flights of fancy it allows.

Shortly after I spoke to Wain, it was announced that he and comedian Will Forte would collaborate on an upcoming film about the tragic life of “National Lampoon” co-founder Doug Kenney. As a biopic and a drama, it will be something of a departure for Wain; at the same time, if anyone was qualified to offer insight on the inner workings of comedy institutions, it’s a founding member of the State. But he wouldn’t talk about it with me. When I asked him what he was working on, he demurred, saying that it hadn’t been announced, and when I asked him if it was something he wrote, he said, with what I hope was amusement, “You’re not going to trap me like that!”

I ended up talking to him about a fake trailer he made for Robert Graham fragrances, a short film titled “Second Sound Barrier.” The three-and-a-half minute long video is a “Too Many Cooks” style advertisement for something that keeps getting increasingly out of hand; it also stars everyone else you think is cool, like Vincent Karthesier, Juliette Lewis, and Ken Marino. But we ended up digressing to talk Trump, YouTube, and what it feels like when you and all of your friends from college end up famous and successful.

My favorite thing about this trailer is that I have no idea what it is advertising.

[Laughs.] That was one of my favorite things about it, too. Because then, therefore, I’m like: What even is this? In that wonderful and most enjoyable way. I loved that aspect of this project.

How did you get the cast together? I saw some of your usual suspects.

You know, we wondered what would be an interesting and odd collection of actors to put together in this that would make it come alive—fun and good and sell it in the right way, whatever that might be. It was this very funny, strange, weird shoot out in the Mojave desert back in December.

Does it have… anything to do with perfume?

I think so. I think that the character’s names, like “Fortitude,” those are the names of the fragrances. If you look for it, it’s like “Where’s Waldo,” you will see the product in the commercial. There are some Easter eggs in there.

What appeals to you about short form? I was particularly taken by a quote from Michael Showalter in the press release, which claimed, “Why make a full-length feature film when you can blend and capture the essence of a film in 3 ½ minutes?”

I’ve always gravitated towards short form. I started off doing sketch comedy, and I’ve never really stopped doing short-type things, whether that was with “Stella” shorts or what else. I’ve always loved the challenge of what you can pack into a small package of time.

And I agree: sometimes, if you have a movie idea you like, you can make the trailer and cover it. You can imagine the rest of the movie.

You do a lot of work on Adult Swim, which also skews pretty short.

I do like that format. I like that quarter hour, which turns out to be 11-minutes, for TV shows, because there’s no break in it. I enjoy that. Like for “Childrens Hospital”—that’s like an hour-long type plot with multiple threads, multiple subplots, multiple characters. And trying to tell that story in a tiny amount of time is a really endlessly interesting exercise. And obviously, as our collective attention spans continue to dwindle, 11 minutes might be the new half-hour.

You have anticipated how little time and attention all of us seem to have.

Our trailer is pushing the limit, I think. The real viral video you want is usually a minute or less. We’re really asking people to give us quadruple time for this.

Do you find yourself watching a lot of YouTube?

You know what, I have to say, increasingly I am watching so much YouTube. I really like it. I like watching it. I have my favorite channels that I follow, and whatever interests I have—I watch things about politics, and about magic, and a lot of Rubik’s cube support tutorials. I have my selection of things. Whatever you’re interested in on YouTube, there’s just an endless amount of material about it. And I think that’s a lot of fun.

And, there are content creators on YouTube that are really great. It’s not just cheapo webcam stuff anymore. There are so many people on YouTube that are making well-crafted, intelligent, well thought-out content. Especially if you only have a few minutes, or it’s just before bed or for whatever—it’s more nutritious, sometimes then trying to watch something on TV, or read a book, or do something silly like that.

Given your YouTube habits—well, you probably have the online profile of a teenager.

Right. That might be a problem I need to take to my therapist.

So to discuss the reunion prequel series of “Wet Hot American Summer”—collaboration, both there and elsewhere, seems to be central to your career.

Starting off when I was still in college, working with that group The State… we just all very much got in the habit, so early on, of collaborating—doing something with, particularly, this specific group of people. And we’ve all, as a group, continued to work together on things in different permutations for decades now. It is a real pleasure to do that. And then to bring back “Wet Hot American Summer,” which was a big, huge, specific group of people all back together again, was beyond my already dreamy dreams about it. To see everyone gathered together on set and to make more “Wet Hot” after a 15-year break was really special. And the response to it was even more of a cherry on top of it. There was an even more positive, unanimous, devoted response to it.

It felt that way making it, too. It’s amazing how you just jump right back into it.

How does it feel that all of your friends from forever are super-famous?

I am not super-famous, or even famous, but I think the fact that the gang of people I came up with, or learned how to do stuff with, or am friends with from over the years—that so many people have become successful and busy and doing cool stuff and staying in the business even, in the entertainment business, is an accomplishment. So I’m very — it’s exciting. I’m so proud of everybody. It’s nice to have peers in my business that I work with, and that I’m in the same world with, that I go back with so many years. It’s nice. It keeps me grounded. And it makes doing this type of work more pleasant, when, sometimes, as we know, the Hollywood scene can be a little creepy.

I’m very interested in it. I’m very engaged in the conversation. I can’t help but follow the day-by-day stuff. And I see myself getting caught up in the day-by-day horse race. And yet I am disgusted by the fact that that is the primary focus of the reporting.

There’s so much that is absolute terrifying—and on the other hand, huge opportunities for us to be thinking about or trying to accomplish right now in our country and in the world, I think. Everything that is so, so crucially important. And yet the national conversation is 99 percent about, is Trump getting this many delegates, and what will he have to do to lose, or win, or how could Bernie possibly beat Hillary. And it’s just so upsetting to me. Like, let’s talk about what they’re going to actually try to do, when they get to office, not who’s ahead today.

A lot of comedians are looking at this election and seeing fodder for their humor. But you’ve never been a particularly political comic.

That said… the thing about Donald Trump for me is that yes, he is hysterically ridiculous. But it’s not funny. I can’t believe it, but I don’t find it funny anymore because it’s so terrifying. I think that people are almost voting for him to be like, Let’s see what happens if we just fuck the whole thing up. Let’s just flip over the table and throw them all out.

Besides YouTube, what else are you watching right now?

Actually, I love “Broad City.” And "Nathan For You" is probably my favorite [comedy].

I’m just about to complete the season of the TV show “Another Period,” and I’m very excited about that.

This season is, I think, really really funny. … If you’re a fan of the show, you know that I was hit with a hatchet and then went into a coma. At the very end of the last season, I woke up [laughs.]. This season we definitely follow through with what happens next. The hatchet wound, it plays a big part in the plotline, I’ll just say that.