Scientists have new data, but can we really measure something as complex and shifting as female sexual response? 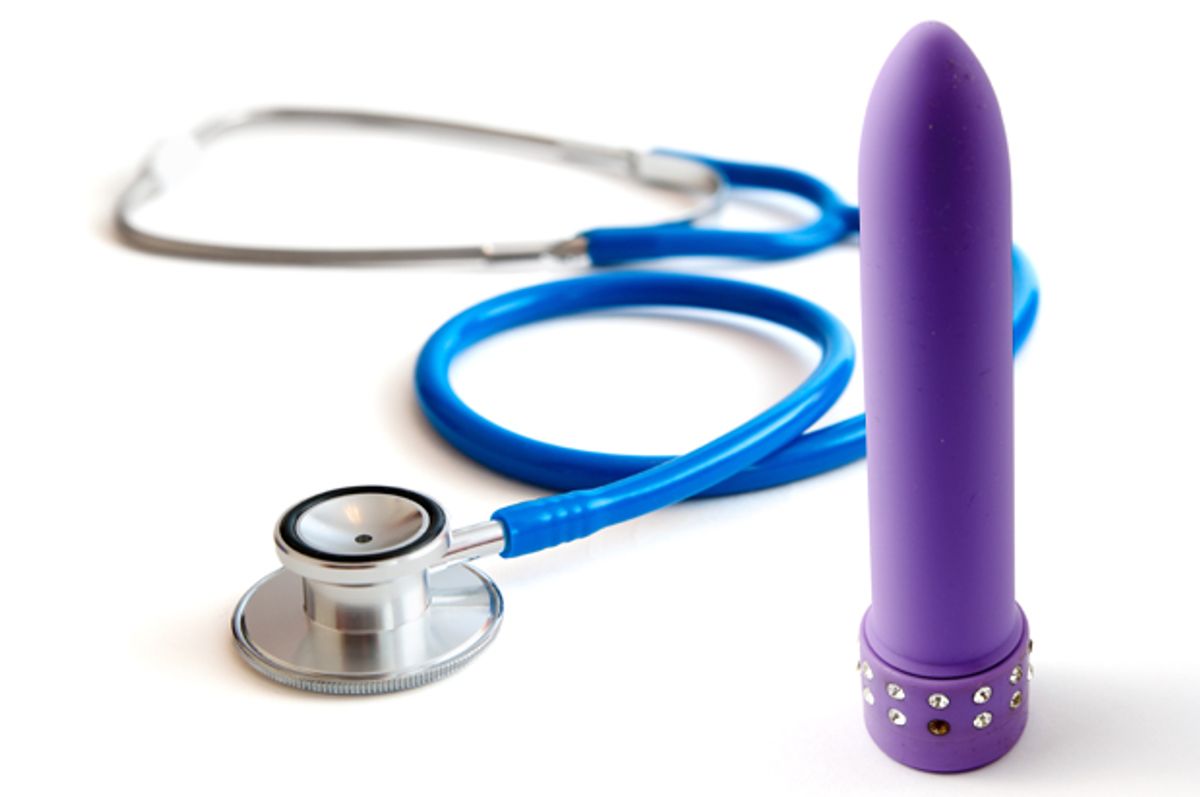 On the evening of Tuesday, Aug. 18, 2015, flibanserin was approved by the U.S. Food and Drug Administration (FDA) as a viable treatment option for premenopausal women struggling with Hypoactive Sexual Desire Disorder (HSDD). A non-hormonal pill that must be taken daily, flibanserin—marketed as Addyi—is said to be the cure for those who have problems with low libido.

So why aren't sexuality professionals collectively losing their shit over flibanserin, throwing confetti into the air and twerking around their offices? Because in reality, there is no clear measurement for what, exactly, constitutes "low" libido.

You've probably read a bit about this already: the fact that no one really knows what it means to have normal levels of desire, arousal or orgasm. What makes a person's levels of arousal or desire "abnormal"? How much desire should you be feeling? Low in relation to whom? And what are doctors treating, exactly? Is female sexual dysfunction (FSD) really a disease, or is it just a natural response to life? When desire can shift from day to day because you are distracted by your to-do list, because you're annoyed with your partner, because you feel fat, because you're feeling blue, how can you even determine what's normal for you, let alone for women in general? When desire naturally ebbs as you grow older, or as you take on more responsibility, how can you know how horny you're supposed to be right now?

Because there are no clear answers to any of these questions, some sexuality professionals accuse those in the pharmaceutical industry of medicalizing what, for many, are just the natural ups and downs of life. And in Ray Moynihan, Ph.D.'s "Sex, Lies, and Pharmaceuticals," Kinsey Institute research scientist Erick Janssen, Ph.D., is quoted as saying about the lack of clear measurement tools with which to define FSD, "It's like using a ruler without marks."

So where are these allegedly deficient measurement tools coming from? In many cases, their development is being funded by the pharmaceutical industry, or managed by doctors who are financially beholden to pharmaceutical companies. After all, a drug can't be approved for treatment until there is a way to evaluate its efficacy. And you can't evaluate its efficacy if the condition or disease it's meant to treat does not have an official metric for diagnosis. So researchers have been tasked with finding and defining the line between normal and abnormal. And in order to do this, they have been forced to experiment with a large variety of technological tools in order to figure out the best way of measuring a woman's sexual functioning.

They've tested blood flow to the clitoris, effectively equating a lack of female arousal with erectile dysfunction (ED). This is, after all, how Viagra works—by increasing blood flow to the penis—so why wouldn't a female version be just as effective? It makes sense but, as highlighted in the most recent update of the Diagnostic and Statistical Manual of Mental Disorders (DSM-V), physical arousal and sexual desire—while being two distinct aspects of sexual response—are still intertwined in a way that makes them impossible to separate from each other.

They've tested the levels of various hormones in the blood, including testosterone and estrogen. After all, these hormone levels can affect one's sex drive. It makes sense but, in reality, our hormone levels fluctuate over time, and even from day to day. It's a natural part of life. So it's tough to determine how big of a factor these hormones really are.

They've even looked at the brain. One brain imaging study, for example, shows that women who complain about low desire demonstrate different patterns of brain activation in response to sexual stimuli relative to women who do not report feeling distressed by low sexual desire. These results are intriguing in that they suggest that women who self-diagnose as having HSDD may process sexual stimuli differently than women without HSDD. This is the type of research behind drugs such as flibanserin, which target brain chemistry. But research has also shown that drugs such as these have thus far only had a modest effect on women's sexual experiences.

In conducting all of these studies, researchers have used ultrasound machines. They've pressed probes against the clitoris and developed high-tech tampons in order to see what's going on inside the vagina when a woman becomes aroused. They've used clips that take the temperature of the labia and they've used scans to find abnormalities in the brain.

But none of these tools and none of these studies have really been able to get at the complexity of female sexual response. This is because they overstate the importance of physical factors while continuing to ignore the psychological and social factors that can contribute to lower sexual functioning. After all, it's easier to fix a mechanical problem—in much the way Viagra combats erectile dysfunction—than it is to really dig deep and pinpoint all of the interlocking, underlying causes of a lack of desire. Tests such as these are often designed to find that quick fix. And because of this, they still haven't helped researchers establish a baseline level for "normal."

Which is perhaps why so many researchers have turned to psychometrics, a means of psychological measurement. In developing assessment instruments such as questionnaires, researchers are hoping they can get women to reveal more about their experiences with sexual arousal and desire.

But even this can be difficult to get right, as any instrument developed for use in clinical trials must prove to be both reliable and valid. In developing a questionnaire, researchers must first define what it is they want to measure. In the case of various forms of FSD, this means researching all of the factors that influence a woman's sexual functioning. Once these characteristics have been pinpointed, researchers must then consider how best to measure them. After that, questions are drawn up and then tested within large groups of people. Depending upon how these tests go, the questionnaire may have to be refined further.

Many questionnaires have been developed in this way, all with the intention of running clinical trials on new drugs, and on diagnosing women with FSD. And these questionnaires continue to be developed as none of them, apparently, have been able to deliver satisfactory answers on the true nature of FSD.

And maybe that's because—even in the case of psychometrics—questions tend to focus on the physical.

Out of these limitations have sprung numerous analyses of the existing measurement tools, with researchers trying to parse out what works, what doesn't, and why. In 2010, for example, in a comprehensive analysis of various sexual arousal measurement tools, researchers examined how often self-reported and genital measures of sexual arousal were in agreement with each other. "The human sexual response is a dynamic combination of cognitive, emotional, and physiological processes," the authors eventually write. "The degree to which one product of these processes, the individual's experience of sexual arousal, corresponds with physiological activity is a matter of interest to many researchers and practitioners in sexology because subjective experience (or self-report) and genital measures of sexual arousal do not always agree." More recent reviews have only emphasized the need for further research into healthy sexual functioning, and the development of one standardized tool that can be used by both researchers and health care professionals.

So what might the ideal tool look like? How can one measure something as complex and ever-shifting as female sexual response? Sexuality researcher Kristen Mark, Ph.D, M.P.H., is trying to figure that out. Mark and her colleagues are developing yet another tool for diagnostic and research purposes, a scale that measures sexual desire as something that varies from day to day, and from partner to partner. This scale will hopefully prove effective in measuring both spontaneous and responsive desire, and the ways in which it can shift over time. "By acknowledging that sexual desire is multifaceted," she says, "we can begin to use treatment approaches that are catered to each individual."

When asked how one can measure or manage sexual functioning when it is something that shifts so often, Mark says that that her aim is to develop a tool that "examines sexual desire as a state, rather than a trait." This is something she hopes to achieve by incorporating information on a whole spectrum of sexual experiences as they occur from day to day, and from event to event. "It is meant to get at the nuances of sexual desire in a way that prior measurement tools of sexual desire have not aimed to assess," she says.

And Mark isn't the only one looking for new tools and new answers. Ellen Laan, Ph.D., for example, has been researching female sexual functioning for years, and has even worked on developing a device that simultaneously measures pelvic floor activity and genital response, so as to learn more about genital pain disorders such as dyspareunia. She continues to research desire, looking closely at the many things that make us want to rip off our clothes or, conversely, keep them on.

In a paper on the creation of female sexual dysfunction, Leonore Tiefer, Ph.D., writes that "the public finds medicalization attractive" because the ability to look to a scientific solution is much simpler than looking at everything else that might contribute to sexual dissatisfaction. If there is no chemical imbalance in your brain, if your vagina's not broken, if you can't pop a pill to wipe away the difficulties you experience in the bedroom, then what can you do?

How can you measure the hurt you feel on a day your partner makes you angry? How can you measure the levels of distraction that have you paying attention to the dust bunnies in the corner or the jiggle of your belly or the to-do list in your head instead of that naked person lying next to you? How much weight should you give to your chronic depression, to your prescribed medications, to recent grief, to all of the things that can put a dent in your desire?

There is no doubt that some women experience true distress at what they see as a deficiency in their libido. And it would be doing these women a disservice to dismiss their frustration, especially considering the medical field's history of gender bias and delayed diagnosis where it comes to health issues that have not been well researched, and which are not well understood.

But if there is to be a true solution to the struggle women endure in the bedroom, it likely won't be found while developing another one-dimensional fix. Instead, it must be sought out by looking at women's intimate lives from every angle, and by acknowledging that a multi-pronged approach is the best one.

Steph Auteri is a freelance writer with a focus on sexuality. She has been published in Playgirl, Time Out New York, Nerve, and other publications. She also blogs about motherhood for mom.me. Follow her on Twitter: @stephauteri.