Jimmy McGill is different—his tale begins and ends not with a bang, like Walter White or Tony Soprano—but a whimper 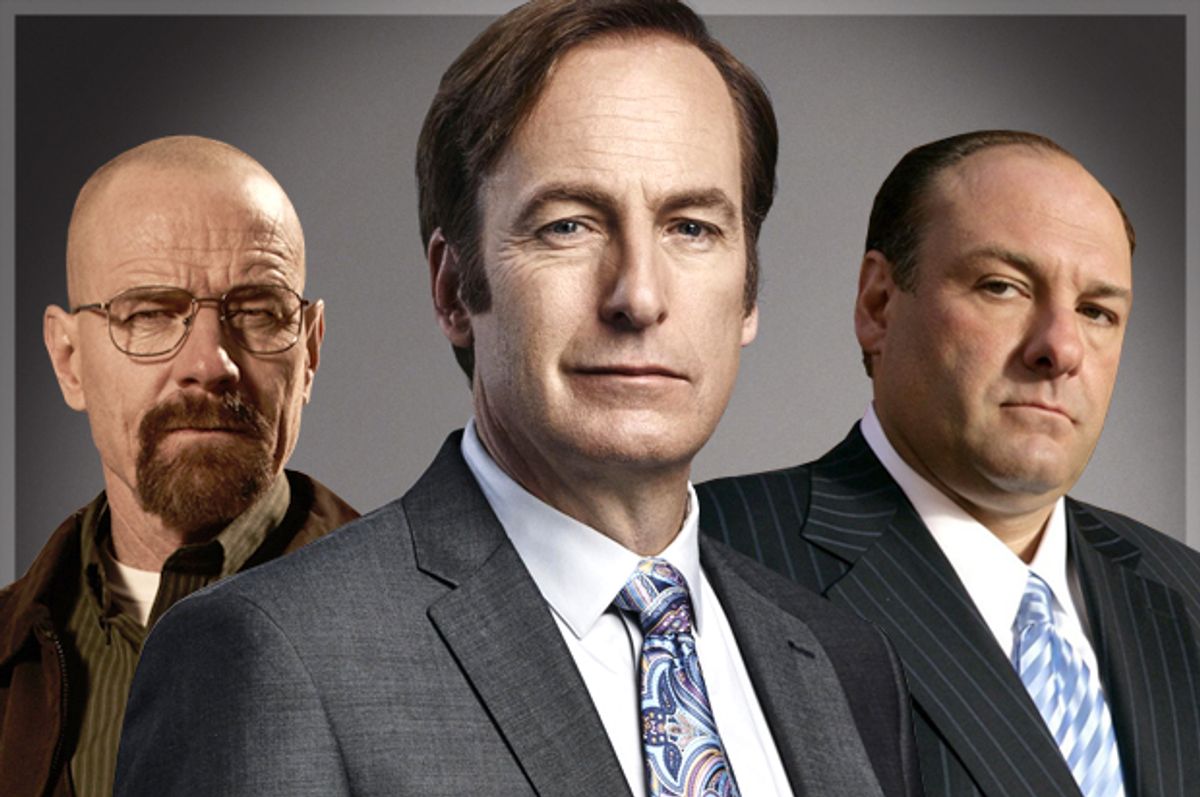 In this season of “Better Call Saul,” AMC’s prequel series to “Breaking Bad,” a specific image has become motif. It’s not just some clever craftsmanship, although creators Vince Gilligan and Peter Gould—also of “Breaking Bad”— show off their technical abilities with every scene of their current show. It’s an image that encapsulates the tragedy of “Better Call Saul”’s protagonist, Jimmy McGill, played with virtuoso skill by Bob Odenkirk—and, by extension, the theme of this drama, which is arcing toward not just “Breaking Bad” but a dim, black-and-white future beyond that.

The image is one of fear. In the first episode of this season, Jimmy—who eventually cycles through the name Saul, before landing on Gene—gets locked inside the trash room of the mall he works at. He reaches for the emergency exit to let himself out, and hesitates, hovering at the threshold, reading the torn printout taped to the door. The door is alarmed, it informs him; the police will be notified. He wavers for a moment more, and then turns, decisively, to walk in the other direction. A choice is offered, and he takes the other way; it is the Omaha-mall version of Robert Frost’s two diverging roads in the woods.

In the season’s third episode, Jimmy—now, still Jimmy, before any other identities floated his way—is faced with a similar choice. This season, as a well-heeled associate at an upscale law firm, Jimmy is trying to get by legitimately, for once. But he can’t stop himself from rule-breaking and smooth-talking, driven by an unnamed desire to break bad, as the series’ sequel would term it. In “Amarillo,” he’s holding a proposed commercial he taped with a budget of $647, waiting outside the office of his boss, Cliff Main (Ed Begley Jr.), deciding whether he should go in and ask for approval. He tries to push himself across the threshold, and fails. He tries again. And when it doesn’t work, he decisively turns around and goes back in the direction he came in, to take the completely different tack of running the ad without Cliff’s permission.

The scenes intentionally mirror each other. Each shows Jimmy/Gene at the edge of an irrevocable decision, hovering on the edge of a law-abiding, rules-following life, and then turning one way or the other. But in both—portrayed magnificently by Odenkirk—the primary emotion is fear.

There are many ways in which Jimmy McGill’s story in “Better Call Saul” is a lot like those antiheroes who created the landscape of prestige television. Like them, he’s a troublemaker; like them, he’s strangely lovable, anyway. Like “The Sopranos,” “Breaking Bad” and “Mad Men,” “Better Call Saul” is about watching a flawed man do flawed things and hurt the people around him, but it’s also about how struggling for one’s humanity is a central part of living, as any person.

And yet what Jimmy McGill isn’t, and really never could be, is “cool.” Or badass, or suave, or powerfully icy. In conflict situations, Jimmy is hysterically nonconfrontational—both in “Better Call Saul” and “Breaking Bad.” He’s definitely a talker—smoothly articulate through both lies and tears, charming the pants off of old ladies at bingo and snotty stockbrokers at hotel bars. But his trickery is a compensation for the fundamental fact of Jimmy, which is that he is a coward. An earnest one; an emotionally authentic one. But not a risk-taker, not a game-changer. Just a guy.

The driving fear at the heart of Jimmy McGill is what has made “Better Call Saul” such a captivating and fundamental counterweight to “Breaking Bad,” the AMC show that “Better Call Saul” is built off of. Pointing to the tone and the pacing, New York magazine’s Matt Zoller Seitz argued that “Better Call Saul” is the anti-“Breaking Bad,” and I’m inclined to agree. But it’s more than just tone for me. It’s that Walter White (Bryan Cranston) is a bold man who dies, while Jimmy is a craven one who lives. He is the cockroach of this universe; above all else, the shell of a man once known as Jimmy McGill always survives.

One of “Breaking Bad’s" most famous lines is in a scene where Walter, shuddering with rage, tells his wife, Skyler (Anna Gunn), that she does not need to fear that he is in danger, because when a door opens and someone is there with a gun, “I am the one who knocks.” Doors, and thresholds, have significance for Gilligan and Gould; the Season 3 finale, for example, has Gale killed after answering his door. It’s telling, I think, that Jimmy’s recurring motif is one of hesitation at doors, instead of knocking, like Walter, or opening, like Gale. Walter White is the one who knocks; Jimmy McGill walks in the other direction.

The antihero drama is one that went from an isolated occurrence on a few risk-taking networks to become a symbol of a high-quality wave of television shows and then the embodiment of frustratingly derivative network imitations. Now that we appear to have gotten it out of our collective system, “Better Call Saul” appears to have shown up just to show us how silly the discussion was. The show’s Jimmy is a much-needed note of dissonance: the actually pathetic antihero. Not the alpha male that made some bad decisions, but the omega male, the one the alpha male beats up to prove a point. Jimmy/Saul/Gene is not in the same hierarchy of dominance as the big dogs jockeying for power—Walter and Gus (Giancarlo Esposito); he’s not even one of the beta males, the willing sidekicks, like Jesse (Aaron Paul) and Gale (David Costabile), the ones who end up dead or damaged. Jimmy is a bottom-feeder. “Better Call Saul,” especially in this brilliant second season, has made us love him.

In every antihero drama otherwise—both the good ones and the bad ones—the exploits of the protagonists took on the veneer of awesomeness. “Breaking Bad’s" Walter White delivered ultimatums with a chilling, thrilling nod of his black porkpie hat, yes. But he was also a drug dealer, creating the most addictive strain of an already life-destroying drug; and in order to secure that life, he became a murderer, too. “The Sopranos’" Tony Soprano (James Gandolfini) was a wickedly funny family man, one who navigated the ins and outs of the mob life with incredible dexterity. But he was also responsible for the torture and death of dozens of people, and made others live in a world of fear. Even the non-murderous Don Draper (Jon Hamm), in “Mad Men,” was a womanizing alcoholic who knew that cigarettes would kill you and marketed them anyway.

Part of the beguiling nature of the antihero drama is that it forces its audience to confront “cool” and grapple with what really lies beneath it. “The Sopranos,” in particular, is an object lesson in confronting proximate evil—or, at least, proximate sociopathy—as Tony’s innermost nature is revealed to be darker and darker.

But you can lead the audience to thematic resonance; you can’t make them feel it. This listicle from 2013, titled “Tony Soprano’s 10 Greatest Moments Ever,” includes him garroting an informant, killing his nephew, and physically threatening his psychiatrist as the character’s high points. Walter White’s “Heisenberg” persona is a kind of cult icon for fans of “Breaking Bad.” And Don Draper’s fix of choice is what made the old-fashioned cocktail become trendy again, even when it was clear that the constant clinking of ice cubes in a glass had more than a little to do with Don’s misadventures.

There’s a theory floating around on Twitter that argues that perhaps the antiheroes of yore, like Tony Soprano and Don Draper, paved the way for the indulgent attitude so many Americans seem to have toward the wrongdoing of Donald Trump. That could be true; I don’t know. But I do think that taps into something more perplexing about what we term bad behavior—which is that, at least from a distance, we also laud it.

There is some perennial appeal to the spectacle of white men behaving badly on television, and that misbehavior’s appeal is probably what got these shows made in the first place. The mobster show. The ‘60s womanizer’s show. The teacher turning into a drug dealer, with the theme right there in the title. Most shows are made because something about them is grabby or engaging right from the start; unfortunately, for cable television, that’s usually exploitative violence or indulgent female nudity. The alpha male antihero fits right into that model; he’s a vehicle for what much of the audience wishes they could get away with, and in the process, obtains a lot of what the audience wants. Drugs. Money. Women. Status.

But “Better Call Saul” didn’t need to impress a distant network executive. The world was familiar and already beloved; the plot even already had an ending, although “Better Call Saul” has offered a bit of a coda, too. The show didn’t need to establish itself as a show in the first four episodes for an impatient audience. And as a result—in the hands of these capable creators—“Better Call Saul” can do a lot of things that most shows can’t. It jumps around, chronologically, with enviable confidence; it introduces characters for all of 30 seconds that its audience goes into spasms of joy over; it dwells on a retirement-home fraud case for one-and-a-half seasons and counting. But best of all, it has found us a real antihero, one without any macho swagger or bravado. There’s a redefining there, not just of bad behavior, but of masculinity; ending up terrified in an Omaha mall’s trash room is not a blaze of glory or a fairy tale; it is not a story to be repeated at parties. Jimmy/Gene/Saul is a kind of challenge for an audience too used to these male figures of bravado; it gives us someone emasculated, and it asks us to worry about his soul anyway.