The madness at Trump rallies focuses an important debate about speech, protest and political correctness 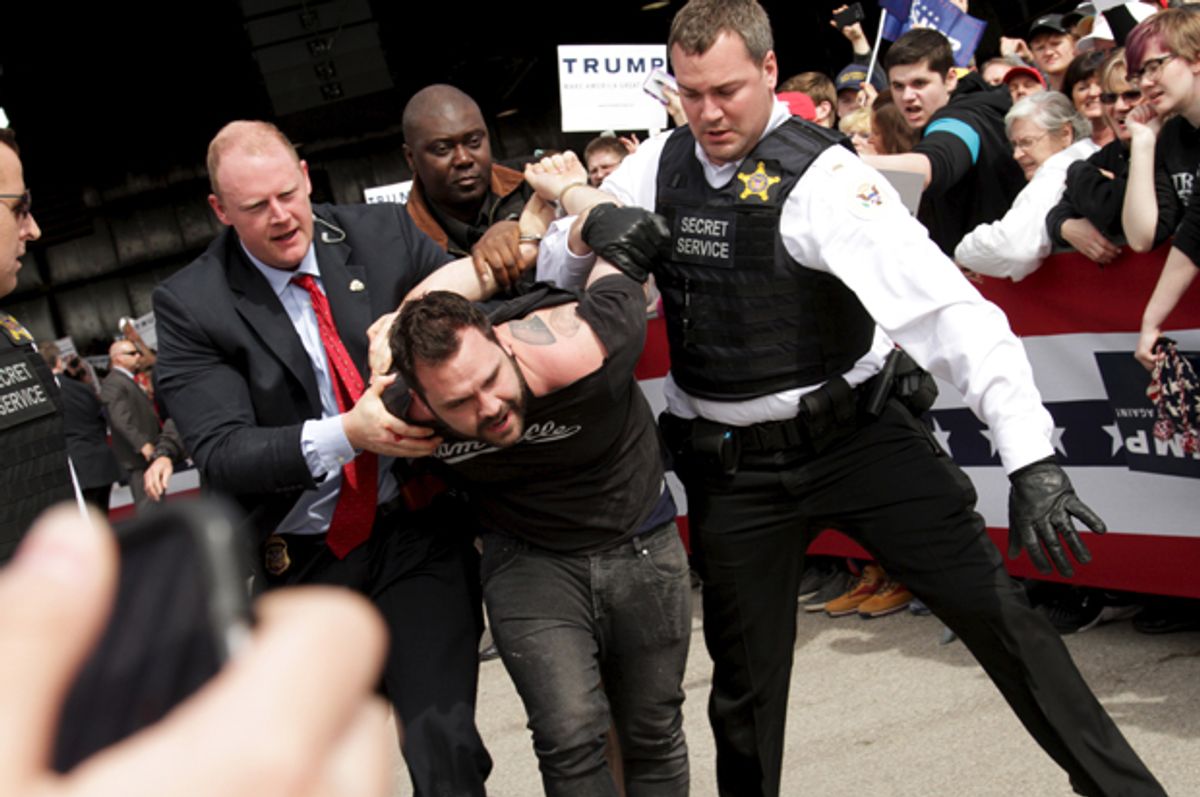 America is having two kinds of conversations about political correctness, one of which Donald Trump’s violent campaign rallies bring more clearly into view.  One kind of conversation is a well-meaning attempt to think about the limits of civility and of free speech.  The other, which I’ve warned about, is an attempt to use “political correctness” as an epithet against those who oppose bigotry and violence.  Donald Trump’s escalating rhetoric of violence—his vocal support for beating and roughly handling protesters at his campaign rallies—is telling, not just because of its brazenness, but because it’s so often accompanied by invocations of what’s “politically correct.”

Consider, for example, what Trump has said recently at his rallies about roughing up protesters and outsiders: “In the good old days, they’d rip him out of that seat so fast, but today everybody’s politically correct”; or “We had four guys, they jumped at him, they were swingin’ and swingin, the next day we got killed in the press, and we were too rough…give me a break…we don’t wanna be too politically correct anymore, right folks?”

Trump, on the other hand, is using “political correctness” as a scapegoat for adverse reactions to his encouragement of violence.  In simple terms, for Trump, “political correctness” means “we’re not allowed to beat up protesters anymore.”  To be “too politically correct,” then, is to think that someone exercising their First Amendment rights at a political rally should be able to do so without being physically assaulted.  By that standard, millions of reasonable Americans who favor the right to protest without getting sucker punched just became “politically correct.”

I’ve claimed for a while now that free-speech concerns about political correctness have been unfortunately entangled in larger and darker culture war battles, to the extent that opposition to political correctness quite often says a lot more than “I’m concerned about free speech.”  By making it clear that political correctness is, as he sees it, not just a barrier to offensive speech, but to violent actions, Trump has brought this point all the way home.

At the Trump rally, political correctness becomes the force that would support the speech rights of protesters and the dissenting minority at Trump rallies, and opposition to political correctness becomes the hard shove and the swinging fist. The man who took a swing at an unsuspecting protester being escorted out of a Trump rally in Fayetteville, North Carolina, claimed he enjoyed hitting the protester because the protester was “not acting like an American,” suggesting further “the next time we see him, we might have to kill him.”  In this new anti-p.c. scenario, speaking in protest safely is “politically correct,” and “acting like an American” means punching and threatening to kill people who disagree with you. The traditional understanding of political correctness as a gesture of politeness or consideration gives way to the opposing extreme, not just a lack of respect but a prerogative to physically attack.

What Trump is really talking about when invoking political correctness, then, is the presumption of a right to violence, not to speech.  If in the “good old days” it was ever acceptable to push and shove a silent, sign-holding protester off the premises at a political rally, or to forcibly remove a disruptive protester not by professional security escort but by vigilante beating and intimidation, that’s what Trump is asking us to excuse today. This, of course, has nothing to do with political correctness as it’s properly understood. Trump is just using “political correctness” as a signal to his supporters that there’s a sickness out there threatening to soften up America, and the antidote is demonstrations of brute violence.

What Trump needs to learn—yes, the same Trump who’s afraid to face Megyn Kelly, is touchy about his hair, and insecure about his finger size—is that standing at a lectern and asking your supporters to throw your punches for you is actually not a demonstration of toughness. And violence at political rallies is not going to make America tougher.

What’s actually tough—and courageous—is having enough political conviction to walk into a notoriously violent Trump rally in protest as a Mexican-American, an African-American or a Muslim. Representing those minority groups in the hostile environment of the Trump rally means doing so without “cover” of political correctness. If anything, the benefits of political correctness that opponents fear most—that it might provide undue cover for people or ideas deserving to be challenged, and turn us all soft—redound to Trump at his own rallies. From the podium and above the crowd, he can’t handle dissenting views, he can’t handle the mere presence of those who disagree with him, and he’s content to let a cushion of angry supporters placed between himself and his adversaries “sort out” their differences by sheer coercion (in his case, physical coercion and violence).

In other words, if the “cultural libertarian” metaphor of authoritarianism might once have worked to describe how, with political correctness, linguistic and ideological consensus could be coercive, Trump has decimated that metaphor by turning it literal. You can’t legitimately complain about the “cultural” authoritarianism of political correctness if in the same breath you’re trying to promote ideological conformity at your rally by means of jackbooted thuggery.