Desperate delegate games: With Trump and Hillary firmly in command, challengers are banking on long-shot strategies and trickery to stay alive 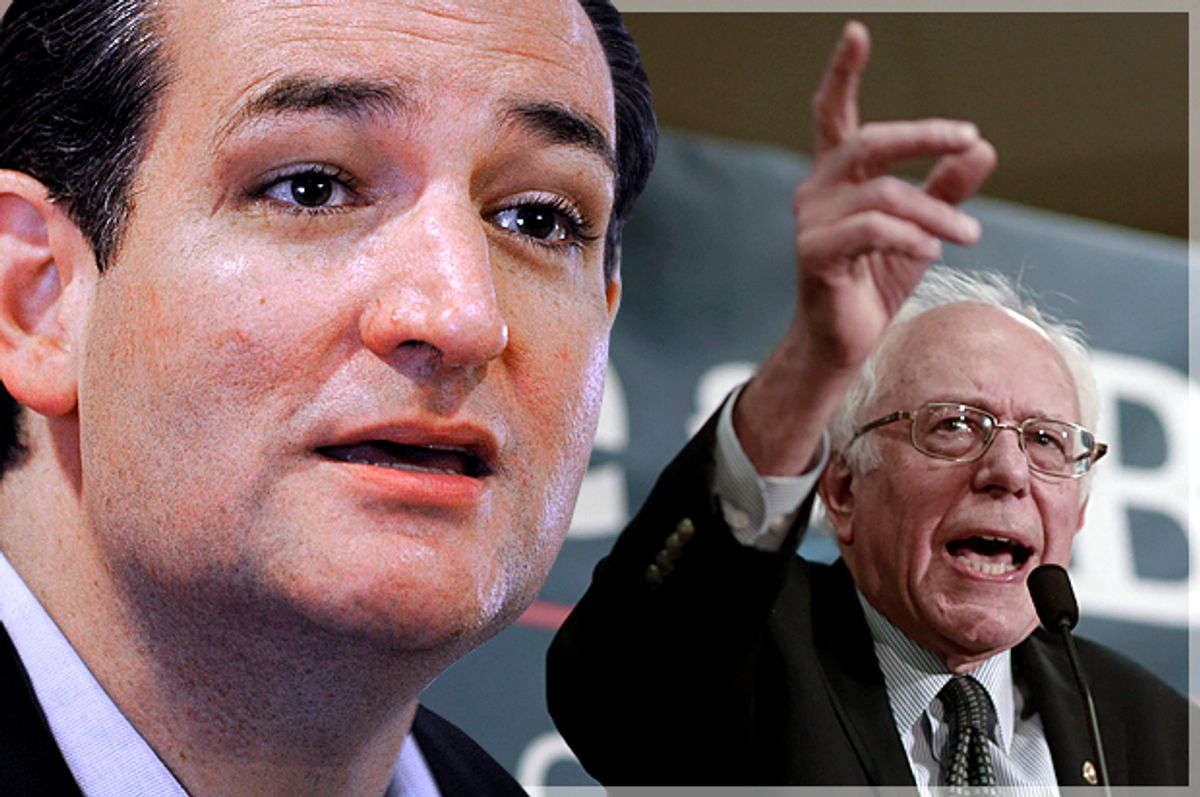 We’re a bit more than halfway through the presidential primary season, and on both the Republican and Democratic sides it’s looking more and more like the front-running candidates – Donald Trump and Hillary Clinton – will end up securing their parties’ nominations. Trump’s chief remaining rival for the Republican nomination, Ted Cruz, needs to win roughly 90 percent of the remaining delegates in order to clinch the nomination outright, while John Kasich would have to take home a mathematically impossible 116 percent. On the Democratic side, proportional delegate allocation means that Bernie Sanders would have to win a series of landslide victories going forward to overtake Hillary Clinton’s lead in pledged delegates.

With the front-runners in command and the window for comebacks shrinking, the challengers have to devise scenarios in which they can still capture the nomination. And at this point in the race, that means thinking up complex and far-fetched schemes for gaming the delegate count prior to the convention.

For the Republicans, delegate trickery and a contested convention have emerged as the last, best options for stopping Donald Trump. It’s difficult to recall an instance in which a candidate who is so thoroughly reviled by the party establishment nonetheless occupies such a commanding position in the nominating race, and anti-Trump Republicans and conservatives are now openly discussing the possibility of thwarting the will of primary voters and seizing the nomination from Trump.

The argument that seems to be bubbling up is that the convention delegates decide the nominee, not the primary voters. That case was laid out explicitly by Republican National Committee member (and probable honky-tonk steel guitarist) Curly Haugland last week. “The political parties choose their nominees,” he said, “not the general public, contrary to popular belief.” That’s true, and the convention rules could facilitate a coup against Trump if he comes up well short of the required number of delegates, given that a large number of delegates are released from their candidate pledge if no winner emerges after the first ballot.

The problem, of course, is one of perception. If Trump is only just short of the 1,237 delegate majority and his competitors are nowhere close to him, the party will look like it stole the nomination from the voters’ preferred candidate. Trump, of course, is sensitive to this dynamic, and he warned – or, more likely, threatened – that “riots” could happen if he’s denied a spot at the top of the ticket. The party may succeed in denying Trump the nomination, but the price would be a (metaphorically and perhaps literally) violent fracture within the party.

Even still, there are conservatives who argue that it is absolutely worth paying that price to stop Donald Trump from becoming the Republican nominee. “No team building exercise is going to fix the 2016 iteration of the Republican Party,” writes David Harsanyi at the Federalist. “There is only going to be a crack-up, no matter who captures the nomination. If that’s true, and if it means one side has to prevail, why not save your party from a hostile takeover that could potentially cost a party both the Senate and the House?”

That brings us to the Democratic race, which is looking more favorable to Hillary Clinton after last week’s primary sweep. The Sanders campaign isn’t going anywhere, but it’s struggling a bit to explain how Bernie overtakes Clinton prior to the convention. But they are kicking around a few strategies, one of which was laid out by Vice’s Sarah Mimms:

[Sanders strategist Tad] Devine's argument boils down to this: If Clinton begins to lose major primary contests in the coming months, for example failing to win any states on a big primary night as Sanders did on Tuesday, her supporters and delegates will begin raising questions about her viability. And as the clock ticks closer to a Donald Trump nominating convention, Democrats will grow even more nervous. At that point, Devine argues, some could be swayed to back the Sanders campaign over Clinton despite their "pledged" status.

It’s true that Democratic delegates are not strictly and rigidly bound to their candidates, but they’re not exactly free agents either. The way the Democratic process works, the delegates pledged to a specific candidates are typically pretty loyal. As the Washington Post explained last month, in many cases “candidates hand-pick delegates and file their names with the state or party. Any delegates the candidates win come from this list, and so the bond between candidate and delegate is likely to be strong.”

So, in the strictest sense, this notion that pledged delegates can float around and pick whomever they choose is correct, but Sanders would need something hugely dramatic to happen for Clinton’s delegates to abandon her. Something on the order of an FBI indictment or Hillary being caught on tape murdering and devouring a transient. If one of those things were to happen, then sure, Bernie would probably have a strong case to make to Clinton’s delegates to jump ship. But it doesn’t seem likely that a string of late-stage Clinton primary losses would provide sufficient incentive for Clinton loyalists to back off their pledge.

The even less workable plan floated by Team Sanders involves capitalizing on the wildly undemocratic “superdelegate” system the party has in place. Superdelegates are Democratic elected officials and other party elites who are free to back whomever they choose in the primary, and right now Clinton has a monster lead in the superdelegate race, with 467 endorsements to Sanders’ 26. The unstated but obvious purpose of these delegates is to provide the party establishment with control over the nominating process and, if needed, the ability to swing the nomination away from a candidate whom voters prefer but the establishment views as unelectable.

As Steve Benen wrote last week, Sanders left open the possibility of coming into the convention trailing in pledged delegates, only to have the superdelegates coalesce behind him and put him over the top. How that happens is anyone’s guess – as with the pledge delegate scenario, the Clinton campaign would have to suffer a catastrophic collapse that renders her unelectable. Absent that, the superdelegate plan relies on convincing the party elites to countermand the results of the primaries, which would send a deep and likely irreparable fracture through the party and leave Sanders saddled with questions about his legitimacy as a nominee.

These delegate-gaming strategies put forth by Sanders aren’t paths to victory; they’re justifications for staying in the race as long as he can. It is possible, however unlikely, that some bolt-from-the-blue political crisis will mortally wound Hillary at some point between now and the nominating convention, and Sanders has the money and supporter enthusiasm to stick around and rise to carry the Democratic standard should that happen. But he can’t bank on that. If Sanders is going to win, he has to get to work erasing Clinton’s delegate lead.