Donald Trump is The Joker: Forget Mussolini and Hitler, the GOP strongman is an authoritarian populist straight from Hollywood 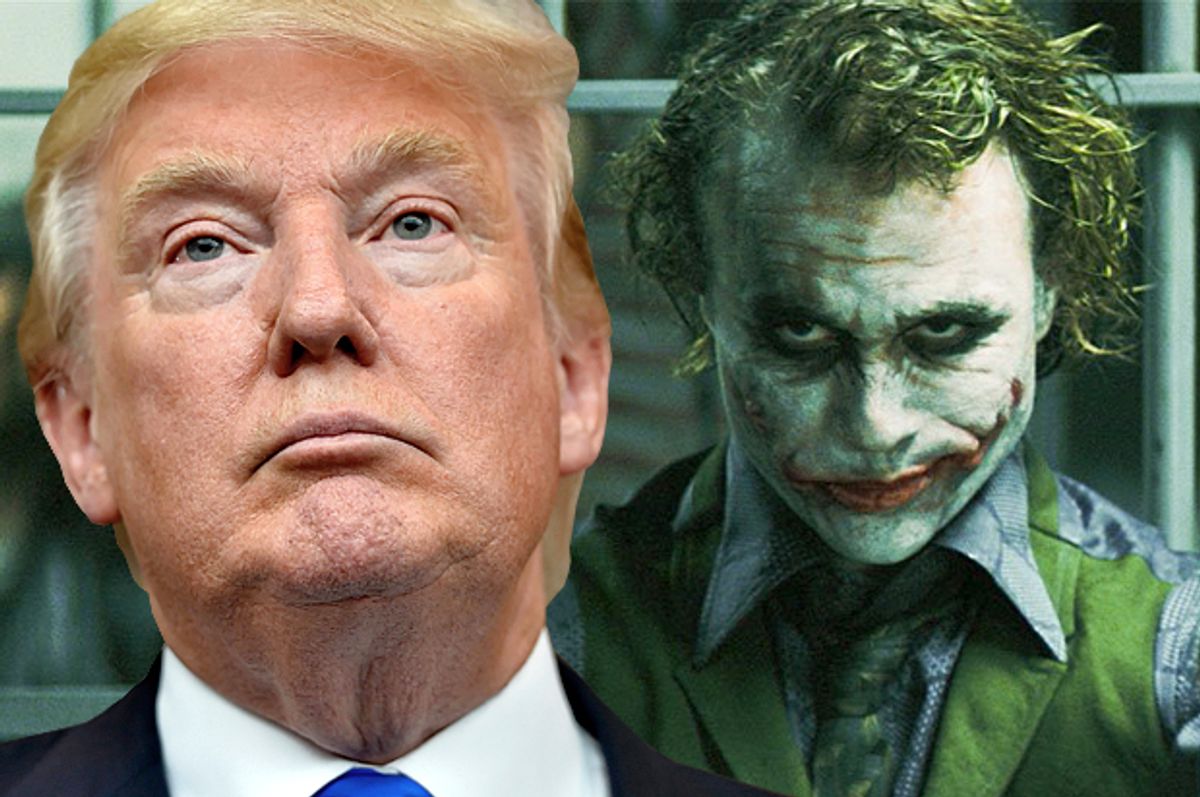 Perhaps there was a time when politics and popular culture inhabited two entirely separate spheres, but those days are long gone. Back in 1995, when John Kennedy, Jr., launched George magazine, he acknowledged that politics had crossed over into the world of pop culture and vice versa, and that you had to begin thinking of pols the way we thought of celebrities and entertainers.

While that may be true, we don’t often consider how popular culture, specifically the movies, has come not only to invade politics, but also to shape the contours of our politics. I doubt that Donald Trump’s candidacy — even his nickname “The Donald” is something out of a movie — could have survived if it hadn’t been for the way the movies conditioned us to accept someone like him.

I already have said on this site that Trump is the first “pseudo-candidate,” borrowing a page from the late historian and social analyst Daniel Boorstin. But Trump may also be the first pop culture candidate, crafted from movie conceptions, not least of which is Trump as what you might call an “authoritarian populist.” That is not a political category; it is a movie mash-up of two very popular archetypes.

You don’t need to be told by me that the movies have colonized our imaginations, put templates in our heads and enabled us to escape from reality. But they do something else, too, something the critic Michael Wood described in his book, America in the Movies. “It seems that entertainment is not, as we often think, a full-scale flight from our problems, not a means of forgetting them completely,” Wood wrote, “but rather a rearrangement of our problems into shapes, which tame them, which disperse them to the margins of our attention.”

In a way, then, the movies provide solutions to some of the things that bedevil us. They are not always realistic answers; usually they aren’t. They are more like idealized ways of confronting problems.

One of the answers the movies provide seems quintessentially American, and, as such, it predates the movies, though the movies gave it renewed power. If you are facing large, unresponsive, deadening and seemingly intractable forces, especially officious or elitist bureaucratic troglodytes, you try to disrupt them, which gives the audience the vicarious pleasure of overturning the applecart.

This has been the stock-in-trade of wiseacres, smartasses and iconoclasts from Chaplin to Groucho to Bill Murray to Robert Downey, Jr., to, on the female side, Barbra Streisand and Melissa McCarthy. These folks know all the institutional pressure points. They represent the populist strain in American entertainment, and we love them for it.

Then you have another form of idealization and another American type: the hero. European films aren’t usually focused on a strongman hero. They are more likely to feature a heroic community rather than an individual, but American individuality being what it is, our movies tell us that almost any problem can be vanquished by a man (almost always a man) with a lot of grit and muscle. After all, the most popular genre in film today by far is the superhero movie, which is the hero movie on steroids.

What it comes down to is: If you are faced with a hostile system, you can undermine it (populism), and if you are faced with a seemingly impervious foe, you can destroy it (authoritarianism). Though there are certainly other options in our movies, those two may be the primary ones. But as these two ideas have leached their way into our heads and our culture, they have also leached their way into our politics, and I say “leached” because it has happened almost imperceptibly.

In large part that’s because most Americans didn’t give all that much thought to the political process until fairly recently, and they certainly didn’t think of ways to deploy pop culture ideas to circumvent it. In bygone times, when Democrats and Republicans more or less sought a consensus, there was a general feeling of complacency, even confidence, that problems would get solved. You didn’t need to fret about it.

I am not sure that our problems have really gotten any worse, but the mechanism for solving them certainly has, largely because Republicans — and let’s be perfectly honest: this is almost entirely on Republicans — decided that compromise was a sin against conservative principle.

Thus did Americans learn to become disgruntled with the whole idea of politics. Frankly, this may be the GOP’s signal achievement — not that it managed to convince a huge swath of America to hate government, but that it managed to get that swath (and more) to hate the political process itself. This isn’t a particularly good thing for a democracy.

What does any of this have to do with Donald Trump? Just this: Trump has traded on those movie archetypes, and, as I said earlier, we also have imposed them on him. On the one hand, Trump fits the mold of the disrupter: the guy who confounds and unhinges authority. When his supporters say that the thing they like best about him is that he speaks his mind and that he is unfettered by civility and politesse, they are not talking politics; they are talking pop culture where that sort of figure, as I said, is cherished.

And when Trump poses as the strongman who can solve any problem and defeat any foe through the force of his personality, he fits the mold of the superhero for whom politics is a messy obstacle. This is the authoritarian appeal that analysts have found in Trump: He will get things done. He’ll build a wall. He’ll deport undocumented immigrants. He’ll destroy ISIS. He’ll tell China where to get off. That’s not a political platform. It’s the plot of a Marvel movie.

Authoritarian populism, one part Superman, one part Groucho, sounds like an oxymoron, and it is. It also happens to be an attractive substitute for people who loathe politics, which is why traditional politicians have an impossible time navigating them the way Trump, a non-politician, has. You hear people say they don’t want another politician. You don’t hear them voice the corollary: They want someone out of a movie — someone supra-political.

That’s Trump. But here’s the problem with reconfiguring our politics as a movie in which characters actually make things happen. Sometimes you get Batman. Sometimes, though, you get the Joker.