The renowned Israeli journalist joined a host of experts at the 2016 Israel's Influence conference in D.C. 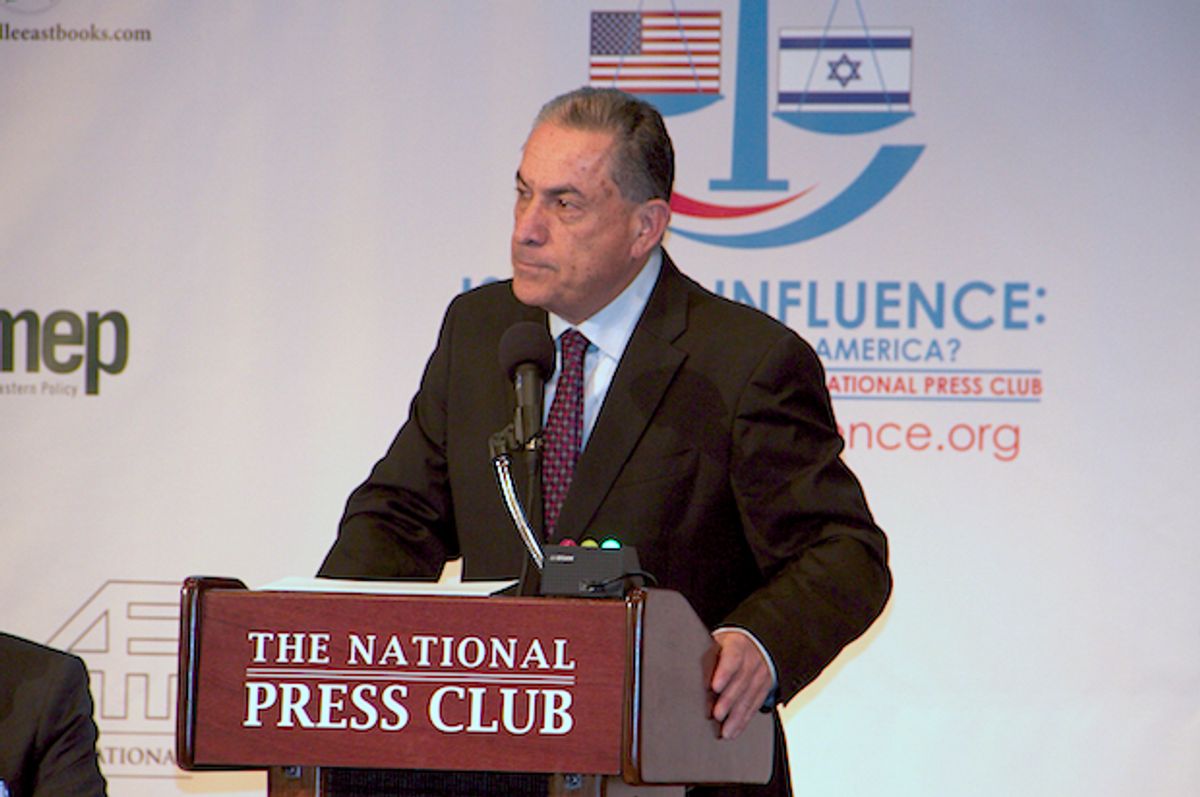 "The drug addict who is your friend, if you give him money, he will really care about you. But are you really caring about him?" asked Levy, who called Israel's almost 50-year-old illegal military occupation of Palestinian land "criminal," "brutal" and "rotten."

He was speaking at the National Press Club in Washington, D.C. for the annual Israel's Influence conference. The event, held on March 18, explored the close relationship between the American and Israeli governments, and the impact it has on the rest of the Middle East.

“Every single thing the Israelis do today is with the total approval and total financing of the United States,” Levy explained.

He criticized U.S. politicians, and particularly lawmakers, for their ignorance of basic facts about the Israel-Palestine conflict.

“Most American legislators know nothing, and what they know is a product of” propaganda, Levy said.

He proposed giving U.S. politicians a tour of the occupied Palestinian territories. Levy suggested that anyone who doubts that Israel oppresses the indigenous Arab population should spend "just a few hours in Hebron," a Palestinian city (known in Arabic as al-Khalil) in the occupied West Bank.

"I’ve never met an honest human being who went to Hebron and didn’t come back shocked," he added.

In Hebron, illegal Israeli settlers live in the middle of the city. Palestinians must travel on separate roads, which are patrolled by Israeli soldiers. They often walk under enormous nets that look like cages, and settlers drop objects — and even urinate — on them from their windows above.

Levy described Israel's occupation simply as a form of apartheid.

He juxtaposed the conditions of Palestinians living under illegal military occupation in Hebron to those of Israelis just one hour away in the large Israeli city Tel Aviv.

"There’s not one single American legislator who can imagine himself what it means to live as a Palestinian under the occupation," Levy continued. "He cannot imagine one day of the humiliation, of the danger, of the lack of hope."

"As long as this is the case, the chances for hope are so small."

The Israel's Influence conference is organized by the nonprofit foundation the American Educational Trust and the Institute for Research: Middle Eastern Policy.

Medea Benjamin, the co-founder of the peace group Code Pink, told Salon that the conference is based on meetings her organization had organized in the past. In early March, Code Pink held a similar event, the 2016 Summit on Saudi Arabia, which explored Saudi influence in U.S. politics and called into question the U.S. relationship with the theocratic absolute monarchy, which funds and exports extremism throughout the world. Salon reported on this summit as well.

Levy lit up the room with his lighthearted yet somber assessment of the situation in Israel-Palestine.

"Life in Palestine now is the cheapest ever," he explained in the keynote address. “Never was it so cheap, never was it so easy to kill Palestinians.”

For Palestinians in the West Bank, which Israel has illegally occupied since 1967, violence has become a part of everyday life under military occupation. In recent months, however, this violence has greatly accelerated. Since October 2015, approximately 180 Palestinians have be killed, along with around 30 Israelis. Almost every day, there is yet another story of yet another death.

Every few years, Israel wages a war with the Palestinian militant group Hamas in Gaza, upon which Israel has imposed a blockade for almost a decade. The Israeli government controls everything that enters Gaza and controls its waters, airspace, electromagnetic field and even population registry, unofficially occupying the densely populated strip that it officially occupied until its 2005 withdrawal.

Israel meted out the largest yet surge of violence in its summer 2014 war on Gaza, known as Operation Protective Edge. The Israeli military, which human right groups accused of committing war crimes, killed more than 2,250 Palestinians, roughly two-thirds of whom were civilians, including more than 550 children, according to U.N. figures. On the other side, 66 Israeli soldiers were killed, along with six civilians. 92 percent of the people killed by Palestinian militants were soldiers.

Levy argued that, if the U.S. stopped giving billions in aid and guaranteeing impunity for Israel at the United Nation, the occupation would end within mere months.

If a president were committed to actually using punitive measure to pressure Israel to end the occupation, it would end, he claimed. "Israel would never be able to say no to a decisive president."

“The chances to change society from within Israel are so limited,” Levy lamented.

He is very critical of both the ruling right-wing Likud party and the centrist Israeli Labor Party. He noted that "to be a leftist in Israel is a curse." Leftists in Israel are frequently called "traitors."

In some of his columns, Levy has warned Israel is witnessing the rise of fascism — and he does not use the term lightly. Other politicians have not been so cautious. In 2012, right-wing Israeli lawmaker Miri Regev proudly declared on a TV interview that she is "happy to be a fascist." Regev now serves as the minister of culture in Prime Minister Benjamin Netanyahu's far-right government.

During Israel's summer 2014 war in Gaza, Levy received daily death threats for criticizing the Israeli military's actions, and had to even hire a body guard to protect him. Israeli veterans have admitted that they were ordered to kill Palestinian civilians in the war — and killed Gazans because they were bored.

He said at the time that he saw the "first signs of fascism" in Israel. Since then, Levy argues things have gotten even worse. The year 2015, he wrote in a column, "heralded the start of blatant and unapologetic Israeli fascism."

Although the violent, overtly racist far-right is on the rise in Israel, with fascistic groups like Lehava chanting "death to Arabs" in the streets and organizing anti-miscegenation squads, Levy argued this extremism masks the violence that is normalized in mainstream politics, which whitewashes the occupation and the Israeli government's crimes against the Palestinians.

The mainstream "decides to cover its eyes to what is happening in its own backyard," he said. "And then the right-wingers can do whatever it wants."

"You have your right-wingers and we have our right-wingers," Levy told the American audience, referencing the rise of the radical right in the U.S., with presidential candidates like Donald Trump and Ted Cruz.

"I don't know who is worse than who," he joked.

Gideon Levy was perhaps the highlight of the conference. Yet the prominent Haaretz columnist was joined by a slew of distinguished speakers.

Among them was journalist Rula Jebreal, who discussed Islamophobia, racism and sexism in the the media, and how this has helped fuel the rise of far-right demagogues like Donald Trump.

Journalist Jim Lobe, founder of the popular foreign policy website LobeLog, spoke of the history of neoconservatism and the Iraq War, and the centrality of hard-line pro-Israel politics within the American neoconservative movement.

Phil Weiss, the founder and co-editor of progressive news outlet Mondoweiss, also detailed pro-Israel bias in the U.S. media, and particularly in The New York Times.

Palestinian novelist Susan Abulhawa spoke of an ongoing lawsuit against the U.S. Treasury Department for allowing billions of dollars of tax-deductible so-called "donations" to go from the U.S. to Israel in order to fund illegal settlements on occupied Palestinian land.

Maria LaHood, deputy legal director at the Center for Constitutional Rights, spoke of the many ongoing attempts in the U.S. to silence criticism of the Israeli government, particularly on college campuses.

Col. Larry Wilkerson, the former chief of staff for George W. Bush-era Secretary of State Colin Powell, also addressed the enormous influence of Israel in U.S. foreign policy. In recent years, Wilkerson has become an outspoken critic of U.S. foreign policy. Salon sat down with Col. Wilkerson for a lengthy interview, which will be published separately.

Both C-SPAN and The Real News filmed the speeches and panel discussion at the Israel's Influence conference, and have made the videos available online.

Legendary musician Roger Waters, former leader of the band Pink Floyd, also attended the conference. Waters, whom Levy called a great activist and friend, has established himself as a leading voice in the international solidarity movement for Palestinian human rights. In August, Levy published a lengthy profile on Waters in Haaretz, describing the musician-activist's views.

Waters declined an interview with Salon.

Distinguished activist Ralph Nader was also present. He declined an interview as well, but briefly answered a few questions.

Nader blasted U.S. policy on Israel-Palestine, arguing the American government has "pretty much abandoned the peace process." As for the Obama administration, he said it appears to have lost interest in the issue; "they're occupied with Syria, Iraq and all the other battlefields."

The Israel's Influence conference came just days before the annual policy conference of the most influential pro-Israel group, the American Israel Public Affairs Committee, or AIPAC. All of the presidential candidates excluding Bernie Sanders spoke at the conference. Sanders turned down the invitation.

Levy characterized AIPAC as an enemy to peace in the region. He also harshly criticized U.S. policy in Israel-Palestine and the so-called peace process.

"The chances for the two-state solution are totally gone," Levy said, referring to the decades-old proposal that Palestinians should have an independent state.

What furthermore unites the U.S. with Israel, he argued, is the widespread anti-Muslim bigotry and discrimination in both countries.

He said he reads the Israeli and U.S. media and “you can’t believe how many lies can be spread so easily.” The prominent columnist blasted the media, which he called "the biggest collaborator with the occupation."

Thanks to this misreporting, Levy argued, “Israeli legislators know nothing; Israeli young people know nothing.”

Journalists “get so much hatred” in Israel and the U.S. for depicting "Palestinian children as human beings," he explained. “This is a crime in our country.”

The Israeli government, he said, “doesn’t treat them as regular human beings.”

Levy articulated three different forms of government in Israel: a democracy for Jewish citizens; a semi-democracy for Palestinian citizens of Israel, who “are discriminated on any possible basis”; and an "apartheid regime" in the occupied territories.

Israel, Levy noted, "may be the only country in the world not only with no borders, but with three regimes."

"Justice is very black and white"

Levy argued that Israel's "addiction" to occupation is not just dangerous to Palestinians; it is even dangerous to Israel’s own future.

"The first victims are obviously the Palestinians, and in many ways the entire Middle East," he said. "But the occupier, look what happens to the occupier," Levy continued, pointing to examples of the radicalization of Israeli society.

He also drew attention to Netanyahu's infamous remarks on the day of the March 2015 election, in which the hard-line right-wing prime minister implored Jewish citizens of Israel to got out and vote because the left was supposedly busing Arabs out for the election “in droves.”

Levy argued that frequently rehashed talking points about Israel being the "only democracy in the Middle East" (Turkey and Lebanon are both democracies, albeit very imperfect ones) give Israel "the right to do whatever it wants to do."

Levy also joked about Israel's claims that it has  the most moral army in the world. “Don’t you dare tell us we are the second-most moral,” he quipped.

The prominent journalist said he can't quite be hopeful, but you never know what could happen. The Soviet Union unexpectedly collapsed in a matter of months, he pointed out, and the same could happen with the occupation.

In the meantime, Levy stresses that the violence in Israel-Palestine "is not a complicated conflict." It is Israel that is oppressing the Palestinians.

“Those who portray it as a very complicated situation don’t want to find a solution,” Levy said.