Jesus gets the "Glee" treatment: Fox's "The Passion" undermines Easter with an unabashed, pandering ratings stunt 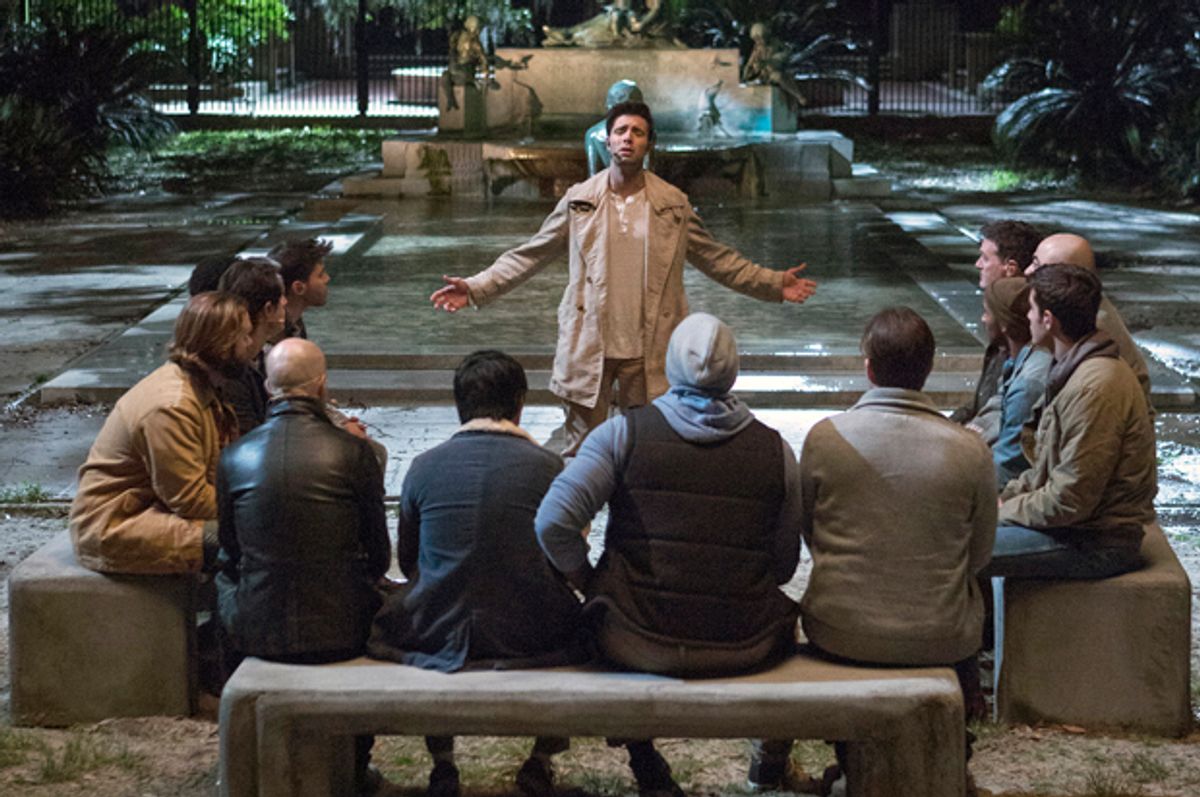 In Fox’s “The Passion,” Jesus (Jencarlos Canela) obtains fishes and loaves for the Last Supper from an obliging New Orleans food truck, dubs Peter (Prince Royce) the rock on which he will build his church in a hip coffeeshop, and faces off with “Roman” law enforcement under the pilings of the Algiers Bridge. There’s something curiously appealing about the reimagining of the story of Easter in the reborn New Orleans—it’s book-to-screen adaptation rethought for the modern-day audience, sort of like Baz Luhrmann’s “Romeo + Juliet.”

But then the actors open their mouths to start singing. Every song is a cover of a pop song, from openly Christian-rock Creed’s “With Arms Wide Open” to not-Christian-at-all Train’s “Calling All Angels.” Watching a bunch of former “American Idol” contestants and other minor celebrities perform pop songs to their most literal meanings—I mean, when Jesus sings “Calling All Angels,” he is really hoping angels show up—made for excruciating television last night. In between the passion play and the Christian-rock concert, filmmaker Tyler Perry narrated the story of Jesus to a live audience, while country singer Trisha Yearwood—loosely in the role of the Virgin Mary—performed soulful ballads directed at her character’s son at relevant plot junctures. And as the concert unfolded, the program followed an illuminated cross being carried through New Orleans’ French Quarter, before arriving onstage in time for Jesus’ execution. The cross was borne on the shoulders of devout New Orleans citizenry, who were also in the audience at Perry and Yearwood’s stage. “The Passion”’s cameras zoomed in on teary or lip-synching devotees whenever it ran out of anything else to do.

Really, a production like “The Passion” is both quality-metric defying and irony-defying, too; it’s not trying to be good. It’s a vehicle for a very specific kind of message, and that message is almost entirely pandering to an already invested audience. The commercials for “The Passion” were even more educational, for me, than the story itself; wholesome “American Idol” concerts, Wal-Mart, that faith-based Jennifer Garner film, and an “Empire” promo emphasizing baptisms, gospel, and family—quite a surprise to those of us who remember the first two seasons.

As a production of television, “The Passion”’s main problem is that it didn’t quite know what it wanted to be—Christian “Glee,” Jesus-y “Romeo + Juliet,” or Tyler Perry’s megachurch concert extravaganza. The promotional material for the event was downright perplexing, and up until literally the moment it started airing, many viewers, including myself, were under the impression that the musical elements of the show would also be live. But the production did recover from this feeling of split priorities in the last third of the event, when Canela’s Jesus was hauled up, on stage, in front of a scene-stealing Pontius Pilate (Seal). Canela, in an orange prison jumpsuit, was flanked by police in SWAT gear; Seal, in a trim overcoat and goldenrod silk tie, was the Javert to his Jean Valjean. Seal was the only performer to transition to singing without it feeling like a Very Special Episode; Canela, very into his performance, had tears rolling down his cheeks. The two closed their duet of “We Don’t Need Another Hero” with Seal asking the audience what to do with his prisoner, and the crowd chanting back, in a truly chilling re-enactment of mob justice, “Crucify him!”

Then, of course, Seal started singing a cover of “Mad World,” by Tears For Fears (but made famous in a Gary Jules cover for “Donnie Darko”), thus ruining any poignant moment it had with pure camp. (Seal was so committed to this song. So committed.)

And this leads to the real problem with “The Passion”: It was trying to engage a mainstream audience through pandering. A story, and a religion, that provides legitimate solace for millions of people became a ratings stunt; a proselytizing endeavor that appeared to want to use top 40 hits as a way to dupe audiences into watching. On one hand, it was a remarkably diverse cast and audience; on the other hand, Perry drew blatant us/them lines in his closing sermon, with a paragraph that could have been lifted from any conservative candidate’s playbook.

"What you believe is, of course, up to you… certainly a scientific approach to these matters would say that we should see first, and then only believe. And that’s fair enough, for some people. … for many of us, including myself, the story of the passion inspires yet another approach. First you believe, and then only can you truly see."

It is laudable that “The Passion” opted for a showcase of New Orleans, gospel music, and a racially diverse cast, but the corresponding conclusion seemed to be that the program did not have to be particularly smart. It instead looked like a painful sort of talking-down, as exhortations for worship were sandwiched in between advertisements for another “Barbershop” sequel and the aforementioned drippy “Empire” promo. Not all of “The Passion” seemed designed to insult the intelligence of its viewers, but given that the final number is Jencarlos Canela on the roof of the Westin New Orleans singing a cover of Katy Perry’s “Unconditionally,” it’s safe to conclude that an awful lot of it was.

Though “Grease: Live” is not an entirely analogous comparison to “The Passion,” Fox saw this morning that the payoff for aiming dumb is not what it hoped for. Ratings dropped 42 percent from that far more sexually adventurous event to this one, which, true to text, did not feature a single female speaking role in its scripted elements. Perhaps that is because this whole thing was already done once, and better, with “Jesus Christ Superstar,” and perhaps that is because “The Walking Dead” was also on, directly opposite the closing hour of “The Passion.” But at least some of it might be because it’s pretty frustrating to watch something that thinks so little of its audience. We might believe, but we’re not stupid.