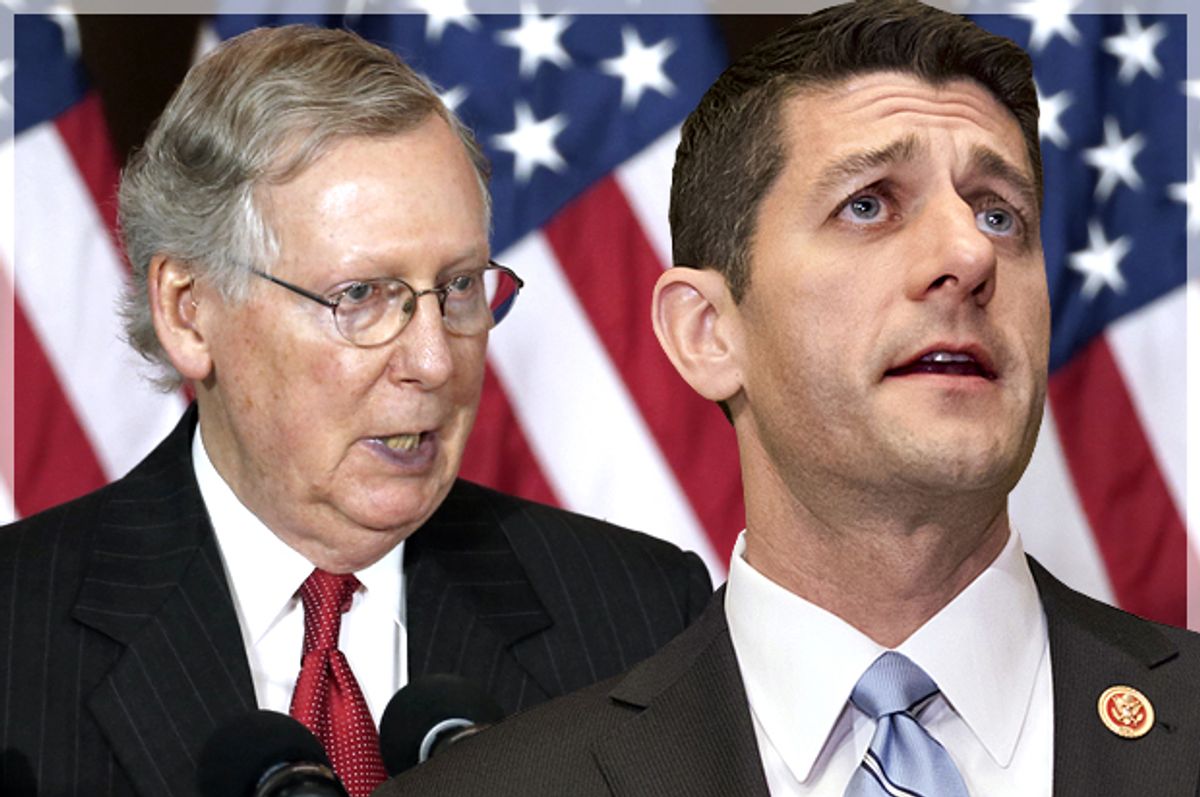 Last week's nomination of Judge Merrick Garland to fill the Supreme Court vacancy left by the death of Justice Antonin Scalia sparked another round of speculation about whether or not the Republicans were on the verge of sobering up and becoming responsible leaders who will perform their duties as prescribed in the Constitution. President Obama has offered them a man of the highest integrity who by all accounts is extremely well-liked by members of both parties. And although he is seen as a member of the center left, he is known to be a moderate in judicial temperament and very respectful of precedent. Republicans could never have expected a more congenial choice from a Democratic president. And it doesn't matter one little bit.  Despite the wistful hopes of commentators and establishment Democrats everywhere, they will not confirm him.

This isn't entirely surprising, of course. This is one of "their" seats, which they believe is ordained by their Creator to be a hardcore rightwing zealot. And it is true that appointing a moderate to the "Scalia seat" will change the balance on the court. That's the sort of thing that tends to happen when presidents are elected from the same party all but eight years out of 24, which can legitimately be seen as a referendum on the two parties' judicial philosophy.  They've been lucky this didn't happen sooner.

But lifetime appointments are always a dicey matter of timing, so we have normally held to the idea that whomever the people last elected as president is still fully endowed with the power of the office. This includes nominations to the Supreme Court, at least until he is officially a lame duck after the election in November. In practice it would not have been surprising for the Republicans to make a great show of deliberation in assessing the merits and qualifications of a president of the opposing party's choice of a Supreme Court justice in an election year. No one would have been shocked if they had tried to game out a way to allow the seat to be a motivation for their voters in the hopes a new president more in line with their philosophy would have the privilege of making the nomination.

One might have expected them to slow-walk the process over the course of months, perhaps hold long and laborious hearings and then even allow one of their members to stage a filibuster over the vote. We could have hoped they would do all this while at least paying lip service to the longstanding processes of the Senate in order to preserve a belief that despite our differences over politics and policies, we still maintain a healthy respect for the rules and norms which allow us to function even at times of partisan polarization.  But that's a foolish hope. Those days have been gone for a very long time.

Back in 2006, Norman Ornstein and Thomas Mann wrote a book, called "The Broken Branch: How Congress Is Failing America," about our dysfunctional government in an age of partisan polarization. They identified much of the problem at that time as being a result of the strong majority party leadership that began under Newt Gingrich and the breakdown of the system which featured a more diffuse power center under committee chairmen. They revisited the subject six years later with a sequel called "It's Even Worse Than it Looks: How the American Constitutional System Collided With the New Politics of Extremism," which specifically places the blame for our increasingly impaired democracy squarely on the Republican Party.

They call our current dilemma "asymmetric polarization" and describe the GOP of this era as “an insurgent outlier—ideologically extreme, contemptuous of the inherited and social and economic policy regime; scornful of compromise,unpersuaded by conventional  understanding of facts, evidence, and science; and dismissive of the legitimacy of its political opposition.” They discussed the recent obstructionism and hostage-taking born of over-promising and a winner-take-all mentality. And they analyzed at great length the unwillingness of these extreme politicians to confirm President Obama's nominees, which they correctly characterized as “blocking nominations even while acknowledging the competence and integrity of the nominees, to prevent the legitimate implementation of laws on the books.“

This is the Republican party that is now getting ready to nominate an unqualified megalomaniac for president. And yes, the "establishment," to the degree it exists at all, is struggling to find its way out of the problem they have been allowing to metastasize for decades.  It's only getting worse. The Speaker of the House and the Senate Majority leader can barely rouse themselves to condemn their frontrunner for refusing to disavow the KKK.

Confirming Judge Garland in the lame duck session once an election has been held, which is the latest idea circulating among observers in the beltway, would be a sharp departure from their usual strategy. Recall that, in 1998, Republicans sought to overturn a presidential election by impeaching the president over a sexual indiscretion. And they were undeterred despite losing very badly in a midterm, which was widely assumed to be a referendum on the impeachment. The architect of the GOP's slash-and-burn strategy, Newt Gingrich, lost his speakership over it, but it did not stop them. They went ahead and the nation was only spared by the two-thirds requirement for conviction in the Senate.

More recently, when the entire world economy was crashing in 2009, the new president had to beg just to get a small handful of Republicans to sign on to a stimulus package everyone knew was necessary to prevent further catastrophe.

House passage on the package came on a 246-183 vote—with no support from Republicans. Senate action followed on a 60-38 roll call that stretched for five hours in a near-empty chamber as Sen. Sherrod Brown flew back on a government plane from his mother's wake in Ohio.

Three Republican moderates—Sens. Olympia Snowe and Susan Collins of Maine and Sen. Arlen Specter of Pennsylvania—voted for the bill. But with Sen. Edward Kennedy (D., Mass) ill with cancer, Brown became the needed 60th vote, forcing him to shuttle back and forth between Washington and Ohio where his mother’s funeral is Saturday.

The reason the Democrats needed 60 votes was because the Republicans filibustered a vital economic bill.  This happened just days into President Obama's first term after winning an electoral college landslide. Lets just say, they don't let mere elections get in the way of their agenda.

This piece by Ian Millhiser at Think Progress shows they have not changed their ways:

McConnell offered this unusual view of the confirmation process during an interview with Fox News Sunday. In response to a question from host Chris Wallace, who asked if Senate Republicans would consider the nomination of Judge Merrick Garland to the Supreme Court after the election if Hillary Clinton prevails, McConnell responded that he “can’t imagine that a Republican majority in the United States Senate would want to confirm, in a lame duck session, a nominee opposed by the National Rifle Association [and] the National Federation of Independent Businesses.”

The Majority Leader’s statement is significant for several reasons. For one thing, it suggests that his previously stated position that “this vacancy should not be filled until we have a new President,” is a sham. Simply put, it’s unlikely that the NRA or the NFIB will change their position on a nominee just because Hillary Clinton is president and not Barack Obama.

Anything's possible, of course. Perhaps if things don't go their way in the fall they will be so chastened by their losses that they'll sober up and decide they need to govern like responsible leaders again. But I'll believe it when I see it.