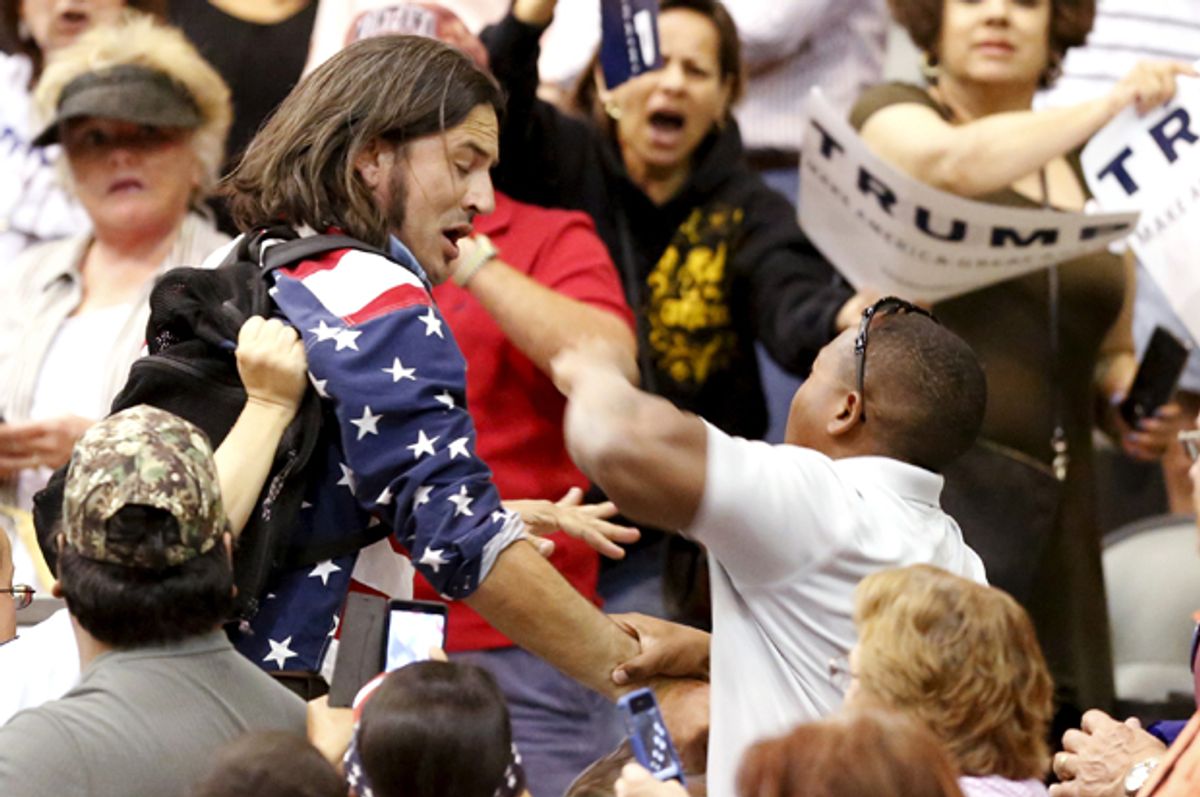 There was violence at a Donald Trump rally held last Saturday in Tucson, Arizona. Such incidences are no longer aberrations or outliers. They are features at Donald Trump’s political carnival and human rodeo. Trump is engaging in political blood sport; his public loves him for it.

As reported by the Daily Mail:

A white man wearing a stars and stripes shirt was pictured being escorted out of a rally in Tuscon, Arizona, when he was punched in the face and repeatedly kicked by a black Trump supporter.

The victim was being taken from the rally alongside another demonstrator in a KKK-style white hood by members of Trump's security when he was punched by a supporter named as Tony Pettway, 32. Pettway was arrested.

Corey Lewandowski, Trump's campaign manager, also appeared to grab a protester by the collar sparking another confrontation that have become features of Trump's recent campaign events.

This is not the first time a black Donald Trump supporter has attacked a protester:

The man who became famous when his bloodied face gained national media attention outside a Donald Trump rally is speaking out — and he says he was sucker-punched by a Trump supporter.

Anthony Cage, 50, a well-known local Ferguson activist and coordinator for the Urban League of Metropolitan St. Louis’ Save Our Sons program, told the St. Louis American that the suspect tapped him on the shoulder. When he turned around, he was sucker-punched in the face.

A warrant has been issued for the arrest of Shawn Morehead, the man suspected of attacking him. Morehead is a black Trump supporter, according to the American.

Cage was seen being led to an ambulance by St. Louis police, who initially believed he was the suspect. They then released him from custody after witnesses told them he was in fact the victim.

Cage says he plans to press charges — and has some choice words for the GOP front runner.

“Trumpism must be stopped in its tracks,” Cage told the paper. “It’s 2016, not 1916. We just elected our first black president. How can we elect Trump, a man who preaches hatred?”

At the Donald Trump rally in Chicago, I also witnessed two such events where black “Trumpeteers” were either the leaders of a violent fracas or were on the verge of physical combat with African-Americans who oppose the American Il Duce.

The idea of African-Americans fighting in support of a presidential candidate, one that is championed by overt and unapologetic white supremacists, a nativist, and who shares anti-black propaganda via social media, could be the basis of a skit on Dave Chappelle's show or "Saturday Night Live." Unfortunately, it is all too real—a type of political blackface routine for the Age of Obama.

However, the attacks by black Trumpeteers should not be surprising.

Today’s black conservatives serve as the professional “best black friends” for the Republican Party. In that role black conservatives excuse-make for white racism, are used as advocates for right-wing policies that hurt people of color, act as human ventriloquist dummies who often channel the worst anti-black racism and attitudes, and are insurance against charges that the Republican Party (with its Southern Strategy, birtherism, and use of both overt and “dog whistle” racism) is hostile to people of color.

There are many examples of black conservatives following their proscribed role as the professional best black friends for the Republican Party and the American right-wing.

Supreme Court Justice Clarence Thomas routinely votes to reverse the won in blood victories of the Civil Rights movement by opposing the Voting Rights Act and other efforts to counter racism and discrimination in American society.

Donald Trump’s spokeswoman is an African-American woman named Katrina Pierson. In that role she defends Trump’s racism, nativism and the violence at his rallies.

Black conservatives are routinely paraded around on Fox News and across other parts of the right-wing news entertainment disinformation machine to defend police brutality, undermine the legitimacy of President Barack Obama, and to attack the intelligence of the African-American community with screeds such as black people who support the Democratic Party are “dumb,” “stupid" or “stuck” on a “plantation” like “slaves.”

There are other black conservatives who support the Republican Party because they want to feel “special” and to have their egos stroked by being one of the few people of color in the organization. Black conservatives in the post civil-rights era occupy a position of privilege in the right-wing political machine. From the lecture circuit, to serving as consultants, receiving book deals, or being featured guests on Fox News and elsewhere, there are many lucrative opportunities available for the best black friends of the Republican Party.

Racism hurts people of color. Racism and white supremacy also damages white people. No person who lives in the United States and the West is untouched by those dynamics. Racism (like sexism and homophobia) can be psychologically internalized. Black conservatives in the post civil rights era may simply be seeking out the approval of a political movement that is hostile to them because of the harm done to their psyches and self-esteem by life in a white racist society. This is a strategy that is often used by some members of an out group to find belonging and acceptance in a society that marginalizes and discriminates against them.

Donald Trump rallies are violent because his supporters are authoritarians who are inclined towards social dominance behavior. Trump also creates an atmosphere for violence through his rhetoric. Trump then defends and makes excuses for the violence by his supporters. The black Trump supporters who have committed the most recent and vicious acts of violence are especially enthusiastic because they need to work harder to prove the authenticity of their belonging in a white, racist, proto-fascist political movement. These violent black Trumpeteers are also praised and feted by conservatives online and in other spaces.

If the pattern continues, black Donald Trump supporters will soon become the brown shirts of his proto-fascist political campaign, the leading edge of Trump’s political thuggery. This would be a surreal moment in what is an already twisted and bizarre 2016 Republican presidential primary race.

Anything is possible in Donald Trump’s political circus and human rodeo.

History repeats itself first as tragedy and then as farce. “Trumpmania” is proving to be a combination of the two.