Hergé may've been more an opportunist than an outright bigot, but symbols like this carry weight 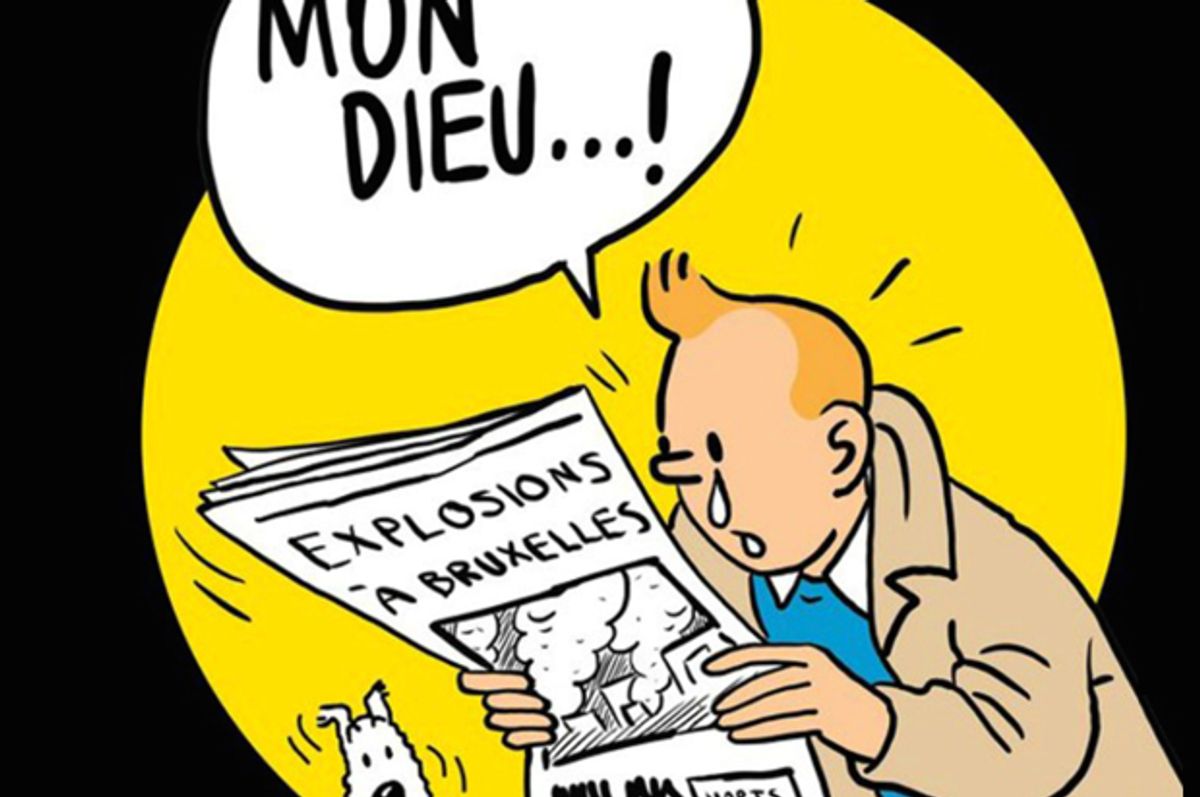 If we threw out all the novels, poetry, music, and other kinds of art made by people with whom we disagreed politically, there wouldn’t be much left. Similarly, if we got rid of all the culture produced by right-wing extremists, on one hand, or sympathizers of nasty left-wing regimes on the other, we start to seriously limit a lot of great work, especially from the early and mid-20th century. I want to be able to read Louis-Ferdinand Céline (a racist and anti-semite by most measures) and Pablo Neruda (who admired Stalin, at least early in his career) despite their politics.

But it’s still a little uncomfortable that Tintin has become one of the key symbols of the Brussels attacks. Here’s the lead to a story in Vox:

After three bomb blasts devastated Brussels Tuesday morning, killing at least 26 people and injuring more than 100, people around the world have turned to an iconic children's comic to show their solidarity with the Belgian capital.

The Adventures of Tintin, written by Belgian cartoonist Georges Remi under the pen name Hergé, has long been a symbol of Brussels and a national hero in Belgium. Now it has become an emblem of solidarity for the city rocked by a terrorist attack that continues to claim the lives of innocent people.

The images of a weeping Tintin are moving on one hand: Who can be unmoved by the sight of a crying child? And the Tintin comics, mostly created in the '30s and '40s, are beautifully drawn and well told.

The connections between Tintin’s creator, Hergé, and various kinds of unpleasantness are pretty well established by now. The children’s newspaper supplement, Le Petit Vingtième, in which Tintin appeared early on, was pro-fascist, like a lot of Belgian culture at the time. Charges have clung to Hergé over the years, and not gone away.

Many of the early Tintin comics often portray Africans as childish, lazy simpletons, which was often the justification for colonial conquest. The fact that Belgium led a violent empire in Congo makes it all a bit too close for comfort.

The title of this list is overstated – “10 Shockingly Racist Moments in Tintin Comics” – but even without the commentary, they make clear that Hergé was rarely able to treat Africans as people. The English novelist and critic Tom McCarthy has written a critical study of Hergé and describes his attitude toward the African characters in “Tintin in the Congo” as “good at heart but backwards and lazy, in need of European mastery.” In the book, a Congolese woman bows to Tintin and says, “White man very great. White mister is big juju man!" In other books, Chinese people show up as torturers. The big-nosed financier in another is not clearly Jewish, but certainly fits a familiar stereotype.

And Hergé worked for a Nazi-run newspaper after the Germans invaded Belgium.

To be fair, Herge was not terribly different from his fellow Belgians in the 1940s. So why pick on Tintin? The Brussels attacks have already unleashed a lot of hateful rhetoric, both here and in Europe. With the head-start of #StopIslam on Twitter, Donald Trump saying that we need to close the U.S. borders, it's going to get nasty. Ted Cruz has already said: "We need to empower law enforcement to patrol and secure Muslim neighborhoods before they become radicalized." This will become more paranoid as the days go on.

There were physical attacks against Muslims in France and Britain after the Paris bombings, and there’s no reason we won’t see a similar reaction after Brussels as well.

Is any of this little Tintin’s fault? Should we ban the books? Burn them? Of course not. They’re lively, well-illustrated stories. And Hergé was probably more an opportunist than a virulent racist.

But I’m hoping that in a day or two, we’ve come up with a symbol of a painful, divisive event that’s not associated with even a mild form of bigotry.