They abandoned the 90 percent: How the Reagan Revolution and Third Way politics led America to ruin

The rise of Trumpism makes perfect sense. Both parties have sacrificed the working class at the alter of globalism 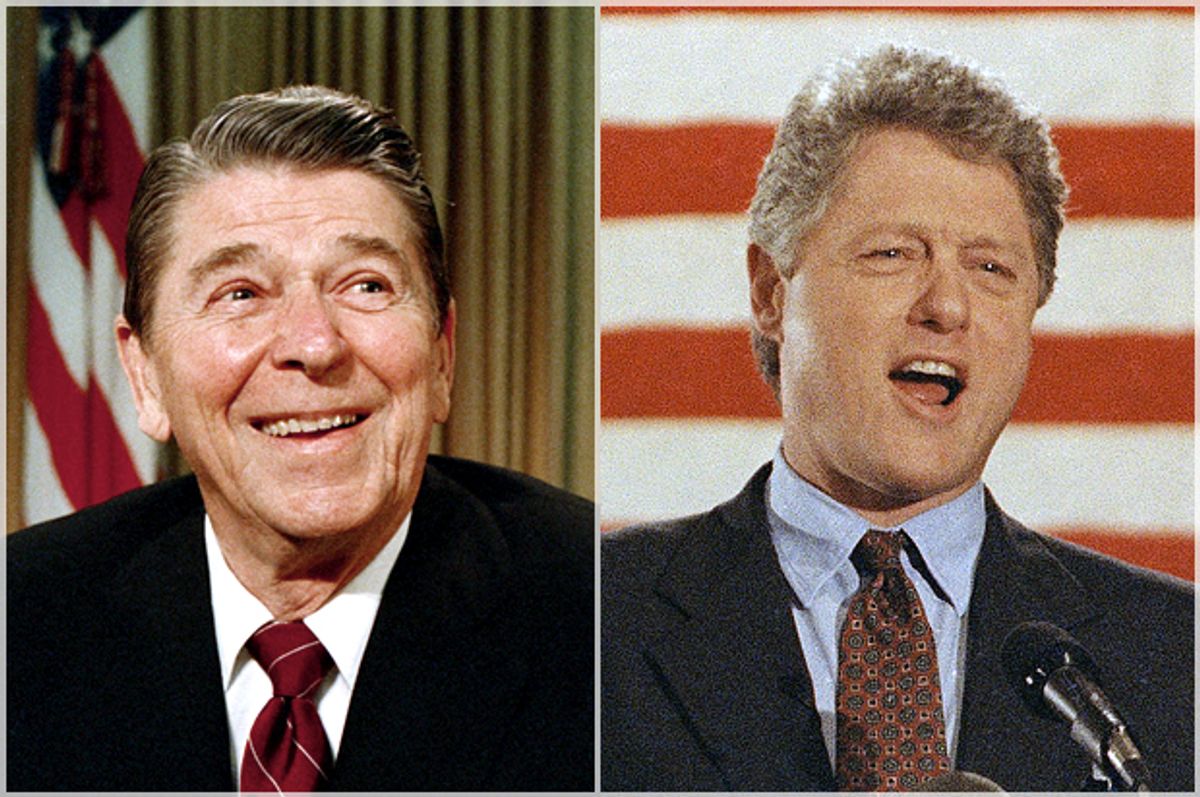 As Donald Trump leads a full-scale war against the Republican establishment and elites, particularly through his attack on both their military (Iraq) and their trade (NAFTA) policies, the Democratic Party is also in a predicament that Bernie Sanders’ candidacy is exposing. Both parties right now face a great crisis of leadership/ideology as well as a great opportunity for reinvention, and whichever party first reinvents itself successfully will begin winning elections the way the Democrats did in the 1932-1968 era.

If neither does, our nation faces a massive crisis provoked by the loss of democratic representation of the majority of the American electorate.  Neither party today does much of anything for the bottom 90% of Americans, as so clearly demonstrated by a recent study out of Princeton that showed that the likelihood of legislation passing that represents the interest of that bottom 90% was equivalent, statistically, to white noise.

Thomas Frank’s new book Listen, Liberal: Or, Whatever Happened to the Party of the People? offers the fascinating premise that starting with the McGovern Commission of 1972 (which largely excommunicated Labor from having a large role in Democratic Party decision-making) and going into a full-out embrace of the “professional class” – i.e. the top 10% economically – the Democratic Party has largely abandoned the American working and middle class – the bottom 90%.

In the late 1980s, the DLC Democrats (and now the Third Way/Clinton Democrats) embraced the professional class and embraced complex solutions to our nation’s problems. They consciously moved away from labor/working class and towards an elitist embrace of banksters, the emerging “geniuses” of Silicon Valley, and the college-educated at all levels.

They even went so far as to suggest it was a good thing that much of America’s blue-collar working-class high-school-diploma jobs go to China and Mexico, as we here in America needed to move to the “new economy” jobs of technology, medicine, and finance, requiring a college education.

This ideological change in the Party led to the Clinton-era 1990s policies that gutted our industrial base, ripped apart the social safety net (ending “the era of big government”), and financialized our economy.

As Frank points out, while FDR had a “brain trust” of the best and the brightest in the nation, they were drawn from a broad cross-section of America in terms of class and education.  Many didn’t even have a college education.  The Clinton and Obama administrations, on the other hand, while optically more racially diverse, are almost entirely run by people with elite educations from elite universities (particularly Harvard), who share the worldview of the DLC/Third Way.

The policies that came out of this new Democratic Party ideology (largely taken from the 1950s Republicans) have resulted in a boon for the professional class, but almost totally left behind the bottom 90%.

President Obama’s failure to even bring up Card Check (the Employee Free Choice Act, which would have strengthened Labor), even after campaigning on it twice, is one of the most obvious examples of the Party’s decision to give lip service to working people, but keep their emphasis on elite complexity and the professional class that embodies it.

The result of these decisions and policies provided the opening for the most unlikely phenomenon (on the Democratic side) of my lifetime: a rumpled, acerbic, 74-year-old Jew with a Brooklyn accent who calls himself a “Democratic Socialist” drawing tens of thousands to stadiums across the nation and holding his own against the anointed candidate of the Democratic Party and Third Way elders.

Bernie Sanders carries into the Democratic Party the message of the bottom 90%, the Occupy Movement, and the Black Lives Matter movement – and the aspirations of students and working people – so successfully in large part because they’ve been abandoned by the Democratic Party elites (including the Clinton dynasty).

While Thomas Frank details brilliantly the reinvention (and, probably, destruction) of the modern Democratic Party, in my book The Crash of 2016, I detail the parallel rise of the modern Republican Party, starting with the Powell Memo within a year of the McGovern Commission.

Prior to the 1970s, business in America had been largely apolitical, preferring to focus instead on making money and running companies. But Powell convinced the Chamber of Commerce and a group of wealthy ideologues to change all that, and a group of billionaires and foundations rose to the call and created the huge and well-funded “conservative” infrastructure of think-tanks, media arms (hate radio and Fox News), and the Koch Network.

Within a generation, the Party elites relied almost entirely on Big Business and Big Money to get elected, only throwing rhetorical bones to the bottom 90% with their cynical “god, guns, and gays” strategy.

The result of those Republican decisions and policies (many also embraced by the DLC/Third Way Democrats as well) brought us the Gingrich-congress-pushed Phil Gramm-deregulation (signed by Bill Clinton but opposed by most congressional Democrats) that crashed the world economy (and threatens to do it again any day now); changes in tax and trade laws that let the rich get fabulously richer but flat-lined wages of blue-collar workers for two generations; and an open revolt among Republicans in the form of the Tea Party and the Trump candidacy.

Which leaves America at a crossroads.

With both political parties captured almost entirely by the interest of the top 1% (Republicans) and the top 10% (Democrats), the bottom 90% feel they have nowhere else to go.  For the past few decades, they’ve expressed this reality of being unrepresented by simply not voting and not showing up for politics, which they correctly saw as rigged and not working in their interest.

Now, with both Trump and Sanders exposing complex trade deals as unwieldy and destructive to the bottom 90% (but very useful and enriching to the top 10%), as well as the politically corrupt environment that supports the top 10%, people on the right and the left are waking up.

And they’re waking up fast and loud.

Interestingly, since the (Democratic) professional class includes elite-publication and TV journalists, they largely write off Sanders as an anachronism, a throwback to the FDR era which, they believe, was a nice and quaint memory but ain’t how the world works any more in this “globalized economy.”

As a result, they don’t cover the Sanders candidacy, except when Bernie supporters decide to show up at Trump rallies and start a confrontation that reaches the level of spectacle that they think qualifies it as “news.”

Similarly, as CBS chief executive Les Mooves so candidly pointed out at a recent stockholders meeting (revealed to the world by the brilliant reporting of Lee Fang over at The Intercept), the most senior management of the big networks are more than happy to give almost $2 billion in free media to Republican Donald Trump because, as Mooves said, “It may not be good for America, but it’s damn good for CBS…”

Thus, whichever party embraces the 90% will probably win the 2016 election.

If that’s Trump and/or Sanders, it’ll either splinter the Republican and/or Democratic Party or may reinvent that party in a way that it can begin to build and hold multigenerational national political power.

If Trump is the Republican nominee, he could well win as a change-candidate in a change-year against establishment-candidate Clinton.

The danger to our nation, though, is that Trump’s belligerent nationalism and militarism represents the same sort of sentiments of the 1930s European National Socialists, and could reform America in a really ugly way, even as he could maintain popularity by being the “I’m here for the 90%” candidate by producing a few real social and economic reforms (yes, the largest part of the early popularity of the European fascists in the 1930s was that they did real social reforms and rebuilt their nation’s respective infrastructures and middle classes).

If the 2016 reform candidate is on the Democratic side and it’s Bernie Sanders, he’ll almost certainly win against any non-Trump establishment Republican (and could also easily beat Trump, according to the polls).  His presidency would force the Democratic Party to re-embrace the 90%, and, combined with Bernie’s positive values of social and economic justice, could take America back to another era of a strong middle class, with peace and prosperity.

(And either a Trump or Sanders candidacy would only succeed over the loud, powerful, and probably very, very ugly screams and actions of the top 0.001% and the Koch Network.  It’d be a titanic battle.)

If all the best efforts of the elites in both parties fail (an unlikely outcome), all the polls at this moment show Sanders easily beating Trump, although that could flip in the face of a large market crash or another 9/11-type attack.

The more likely outcome, given all the machinations of the elite media and both party’s elites, is that the Republicans will nominate an establishment candidate like Kasich or Ryan/Romney, and that the Democratic Party will nominate Hillary Clinton.

The choice between an establishment Republican or an establishment Democrat will depress overall political turnout, turn an emerging generation of Millennials into radical cynics, and feed growing explosions among the base of both parties (Tea Party and the latest version of Occupy/BLM).  It could mean chaos in our streets for a decade or more.

No matter what happens in this 2016 election, though, the bottom 90% has had enough.

If nothing else, the astonishing number of people who say they’ll vote for either Trump or Sanders (i.e. “the outsider”) if the other party (even their own party) puts up an establishment candidate is unprecedented, and clearly shows that our nation is on the brink (if not in the throes) of a political revolution.

The Great Depression of 1930 confronted the world’s two largest industrial powers with similar disasters; Germany and the United States were the hardest hit in terms of a rapid loss of standard of living among the bottom 90%.

Arnold Tynbee is, probably apocryphally, quoted as having said: “When the last man who remembers the horrors of the last great war dies, the next great war becomes inevitable.”

It could be updated to read today: “When the people who remember what America was like before the Reagan Revolution begin to die off, the next revolution is inevitable.”

Whether it’ll be played out in the ballot box or the streets is yet to be seen.