Sorry, but the Grateful Dead are cool now: This upcoming hater-proof tribute officially ends their decades of dorkdom 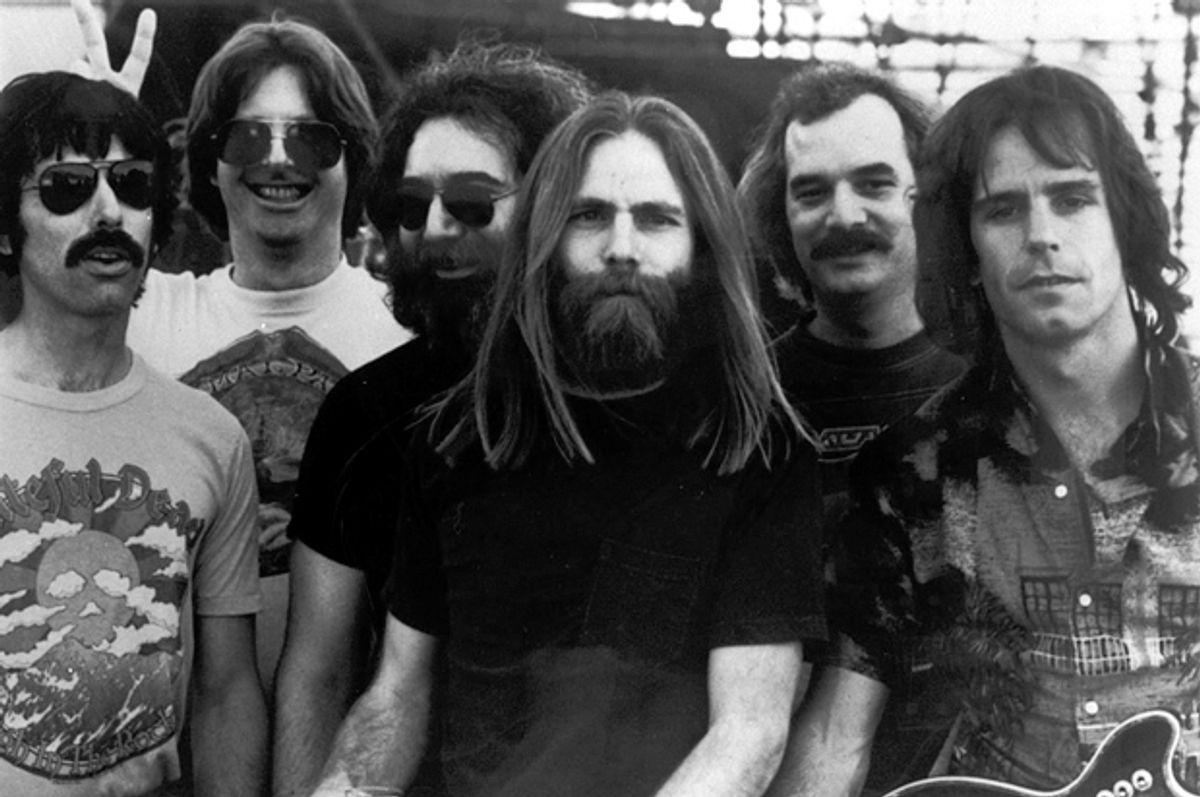 Last week, 4AD announced "Day of the Dead," the newest addition to the Red Hot series of albums, which are released to benefit the HIV/AIDS-associated nonprofit Red Hot Organization. The latest installment is a doozy: It's a six-hour collection of Grateful Dead covers, spread out over five CDs and 59 tracks, curated by the National's Aaron and Bryce Dessner. The brothers' musical imprint is all over "Day of the Dead"—they're part of the house band, as are their National bandmates, Scott and Bryan Devendorf—but they've also recruited an impressive lineup of featured artists, including (to name a few) the Band's Garth Hudson, Wilco, Flaming Lips, Mumford & Sons, Jenny Lewis, Sonic Youth's Lee Ranaldo, TV on the Radio's Tunde Adebimpe, Kurt Vile, J. Mascis, and members of Grizzly Bear and Arcade Fire. The members of the Dead and their extended family are even on board: Guitarist/co-founder Bob Weir appears on a couple of tracks, while collaborator Bruce Hornsby performs "Black Muddy River" with the band DeYarmond Edison, which features Bon Iver's Justin Vernon.

As the press release for the project notes, the Dessner brothers come by their Dead enthusiasm honestly: The band was "a gateway to [them] playing music together; the first music the brothers investigated deeply. The two recall their first-ever jam session at 14 years old with The National’s future drummer Bryan Devendorf playing the Dead’s 'Eyes of the World' for several hours in Bryan’s attic in suburban Ohio." That love hasn't waned over time: In 2012, the National performed with Weir at a fundraiser, and he returned the favor by jumping onstage with the band a few times. Others in the tribute's lineup share the affection. "I feel like the Dead managed to show the bridge from the past to the future in a respectful way," said Bill Callahan. "Much more so than someone like the Stones who felt like pillagers to me. The Dead breathed life into the old songs, expanded the lungs of the old songs."

For those who dislike the Dead—and there are many, many people in this category—"Day of the Dead" represents the latest unwelcome resurgence of critical reevaluation. Of course, loathing the band is a sport in and of itself: In fact, Google the phrase "musicians who love the Grateful Dead," and instead of adoration, you're first faced with a series of articles about hatred for the group, along with pieces that attempt to understand their mystifying appeal. Over the years, the Dead've been accused of having "contempt for their fans" (the assessment of someone reviewing drummer Bill Kreutzmann’s book, "Deal: My Three Decades of Drumming, Dreams, and Drugs with the Grateful Dead"), been called out for being a hit-or-miss live band—in fact, an author who saw them in the late '60s said they "sounded positively catatonic"—and condemned for everything from their fan base to their fashion choices.

Some of these criticisms are fairer than others, of course—and as a New Yorker piece pointed out last year around the Dead's Fare Thee Well farewell shows, the "glorious inconsistency" of the band has its charms. Yet the idea that the Grateful Dead, of all bands, is receiving the type of lavish tribute reserved for more universally beloved groups is intriguing. There's nothing ironic involved here, no shtick involved, just a legitimate desire to showcase the Dead's music—and on a larger scale, convey how and why the Dessner brothers originally "were drawn not just to the Dead’s songwriting, but also to the detail, spontaneity, and depth in the instrumentation." It's a major attempt to steer the Dead and its music toward something resembling respect.

In a sense, "Day of the Dead" is what happens when younger generations and musicians assume a place of influence and prominence in the music industry, and have the clout to create these kinds of projects. But it also points to the fact that plenty of musicians on the album grew up being able to perceive and assimilate the Dead's music apart from the negative stereotypes or original cultural contexts associated with the band. For example, the Dessner brothers would've been 14 in 1990, discovering the band in far different ways (and in a far different time period) than older fans.

In a similar way, anyone who first became aware of the Dead when 1987's "Touch of Grey" landed on MTV and became an inexplicable Top 10 hit, has a much different perception of the group than boomers, hippies or punks did. Back then, the band wasn't a manifestation of the counterculture or a hated example of the stodgy, bloated previous generation—it was just another classic rock band embracing the '80s by leveraging the new music video medium and the decade's modern, accessible sounds. Back in 1987, this was a common sight: The year-end Billboard Top 100 singles chart features Genesis, Fleetwood Mac, Whitesnake, Starship, Bruce Springsteen, Steve Winwood, Lou Gramm and Bob Seger.

As this recollection also points out, however, "Touch of Grey" and the resulting success also came after the late Jerry Garcia finally kicked heroin and then survived a serious diabetic coma: "Garcia’s miraculous return from the brink did not go unnoticed. The group’s 1987 spring tour was big, big news: The tie-dyed spirit of the ’60s lives on! Grateful to be alive! Reluctant Haight-Ashbury guru is back and better than ever! It was incredible to read all the nice things that were suddenly being said about this band that was mostly ignored or derided by the mainstream and rock press just a year earlier. Thirty-some years later, the idea of rediscovering and elevating bands that maybe were sneered or scoffed at is completely acceptable—witness the ongoing Journey and Fleetwood Mac popularity surges, for example, and the recent toasting of Phil Collins. That our reassessment culture is finally getting around to the Dead makes perfect sense.

Yet that the band is no longer an "other" to react to or rail against also speaks to how the ingrained biases and prejudices that once caused friction and division between music fandoms have largely dissipated, dissolved by time, historical revisionism and the leveling influence of the Internet. Identification with musical subcultures used to be fiercely intertwined with deeper personality shifts; taste in bands wasn't just casual entertainment, but a framework of guiding principles for an entire way of life. That's absolutely still the case for some genres or subcultures, but in general, the sharp social divisions spawned by liking (or disliking) a certain style of music aren't as pronounced. Borders between musical genres have collapsed, for starters: Mainstream music is a fluid cross-pollination of rock, pop, folk country, electronic and hip-hop. And seeing as a genre like classic rock is now something parents and their kids enjoy together, it makes sense that attitudes toward the Dead would similarly soften.

Of course, it's not as though the Dead have been hurt financially or personally by any sort of vitriol: The band's fans remain incredibly loyal, and have followed each surviving member consistently over the years. Plus, long before the National unveiled "Day of the Dead," prominent mega-fan musicians have championed the band: Ryan Adams went through a heavy Dead phase in the mid-'00s, performing with Phil Lesh & Friends and covering songs such as "Franklin's Tower" and "Truckin'" with then-band the Cardinals. A decade or so later, modern indie rock feels influenced by the freewheeling Dead attitude more than ever; the genre's dominated by spacey folk-blues jams, cracked-out psychedelic moments and mellow grooves. It feels more correct to say "Day of the Dead" isn't the start of a contemporary Dead resurrection or revival, but the logical conclusion.