In last night's hilarious "Daily Show," Graham was willing to say anything and everything that Noah wouldn’t 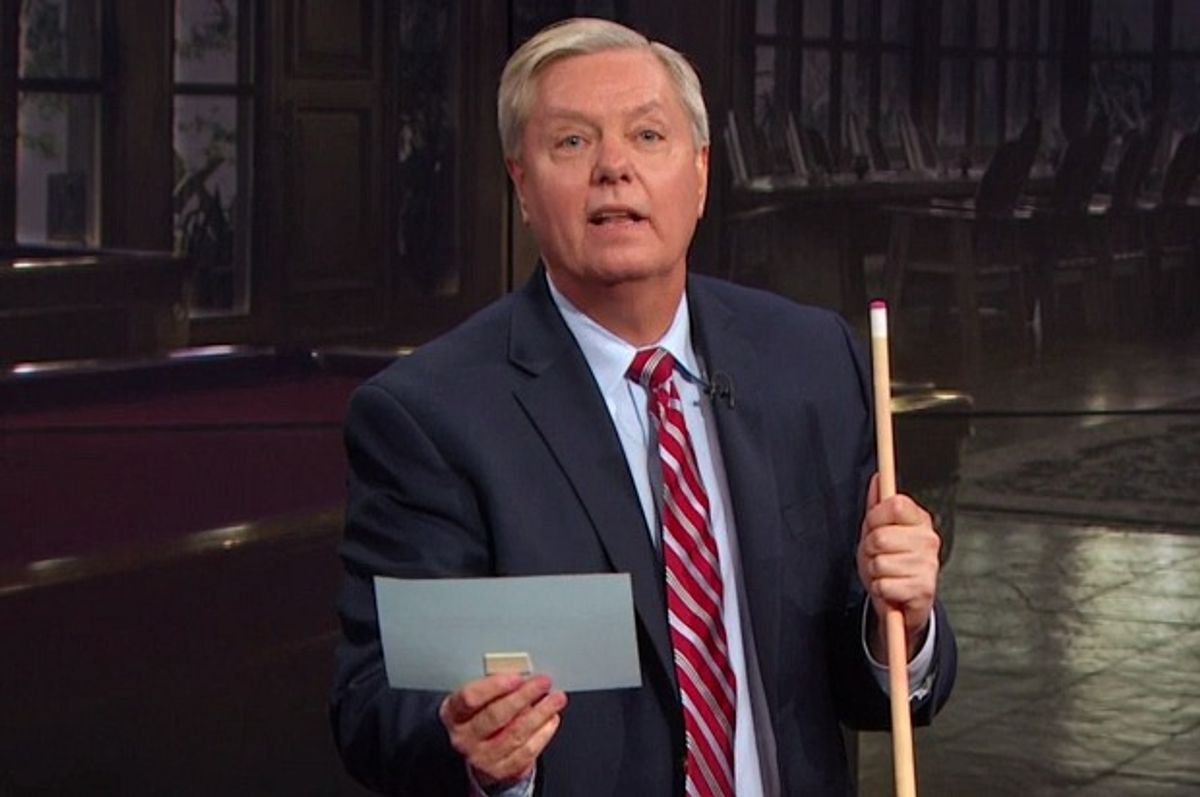 Senator Lindsey Graham, the senior senator from South Carolina, was not on “The Daily Show With Trevor Noah” for any reason except because he felt like it. Sometimes, politicians are promoting policy or running for office, but not Sen. Graham. He was there to play pool and talk shit, not necessarily in that order; as it happened, the talking shit came first.

Graham—who dropped out of the 2016 GOP presidential race in December—endorsed Senator Ted Cruz for president a few days ago, despite having joked, just last month: “If you killed Ted Cruz on the floor of the Senate, and the trial was in the Senate, nobody would convict you.” It’s hard not to like Graham, who is the type of natural politician that is imbued with likable charisma, even when you completely disagree with them. Graham, crucially, seems like a person who has had complete thoughts; it makes his existence in the Republican party completely perplexing.

Along those lines, my colleague Andrew O’Hehir wrote a love letter (of sorts) to the senator just a few weeks ago, observing:

What Hillary Clinton and Ted Cruz don’t have, and what Lindsey Graham has in spades, is some degree of self-awareness and ironic detachment. Neither of those people ever looks at themselves and what they’re doing and reflects that ultimately it’s all ridiculous and does not matter. Whereas Graham has the soul of a poet, or at least of a late-night TV host, which in terms of 21st-century culture is roughly the same thing.

Perhaps Graham got the memo, because just a few short weeks later, Graham and “Daily Show” host Trevor Noah were shooting pool together. It was an irritatingly Jimmy Fallon-esque move—the NBC late-night host of “The Tonight Show” has become a constant purveyor of idiotic games, including one horrific one where the contestants spit food at each other—but it was a good format for Noah. The host has proven himself to be little more than a serviceable anchor for “The Daily Show,” as was demonstrated just in the first 10 minutes of this episode.

But as soon as Graham walked onstage, it felt like an invisible veil had been lifted. Noah greeted him, with the ceremonial intonation of “thanks for appearing on my show for free,” and Graham, apparently without even thinking about it, said, “Well, this is as good as it gets. … Which is kind of sad, really.” The audience laughed, and Noah tried to press him on such a fatalistic pronouncement, but Graham adroitly dodged, beaming from ear-to-ear with that South Carolina smile.

Noah then asked him about Cruz. Graham deadpanned: “I’m on the Ted Train. What’s not to like?” And when the audience hesitated, unsure, he turned that smile out to the audience, waiting with eerie, professional-level confidence for the inevitable laugh of recognition. It was like watching a Little League game lose all of its meaning as a Hall-Of-Famer stepped up to the plate; Lindsey Graham gives absolutely no fucks, and he doesn’t care who knows it.

Noah pushed him a bit more on Trump, and Graham said a few lukewarm things—“I like Ted… Ted and I have a lot of differences…”—before breaking into laughter and nearly giggling. “I’m getting better at this,” he said to Noah, “this” presumably being the idiotic spin of supporting someone he absolutely hates.

Across Noah, Graham also came perilously close to answering the exact question that Andrew outlined in the piece I linked to above—does Graham get that his party made this happen? If he is apparently smarter and savvier than his fellow Republicans, does he understand that they created Donald Trump? Noah phrased it a bit more jokingly: “Have you maybe given [Republican voters] the impression that this is a party of xenophobia and bigotry?” Graham demurred, “It’s possible,” citing a statistic that 35 percent of Republican voters think that President Obama is both Kenyan and a Muslim. Now 65 percent, he joked, just think he’s a bad president.

“The Daily Show” being “The Daily Show,” this jab at Obama met with stunning pin-drop silence, the type of reaction that would wither even a hardened comedian. Noah let the silence foment for just a bit longer than he needed to; Graham, inhumanly, was completely unflappable, riding the wave of ironic self-detachment all the way through the withheld laughter. When Noah returned to the topic a few minutes later, Graham said, with an air of amused resignation: “I think my party’s completely screwed up right now.”

Then, after the commercial break, they played pool. Lindsey Graham is really good at pool. Did Lindsay Graham, at some point, start referring to his series of three shots as different aspects of an ongoing military conflict in the Middle East? Did Lindsay Graham tell Trevor Noah to expedite his green card process, because “young, black, liberal guys from Africa” will be the first to go under Trump? And after reading some of “The Daily Show”’s lukewarm backhanded compliments for Trump, did Lindsey Graham outdo them all with a tossed-off joke about how Trump’s complexion made former Senate Majority Leader John Boehner “look like an albino”? I cannot quite confirm or deny any of these things, because I barely believe they happened myself. But along with the game of pool and the award for most ironic detachment in a presidential election, Lindsey Graham won it all last night, making for some rather brilliant TV.