"Daredevil" makes the case against war: Underneath his gun-happy surface, the Punisher is a powerful symbol of the horrors of combat 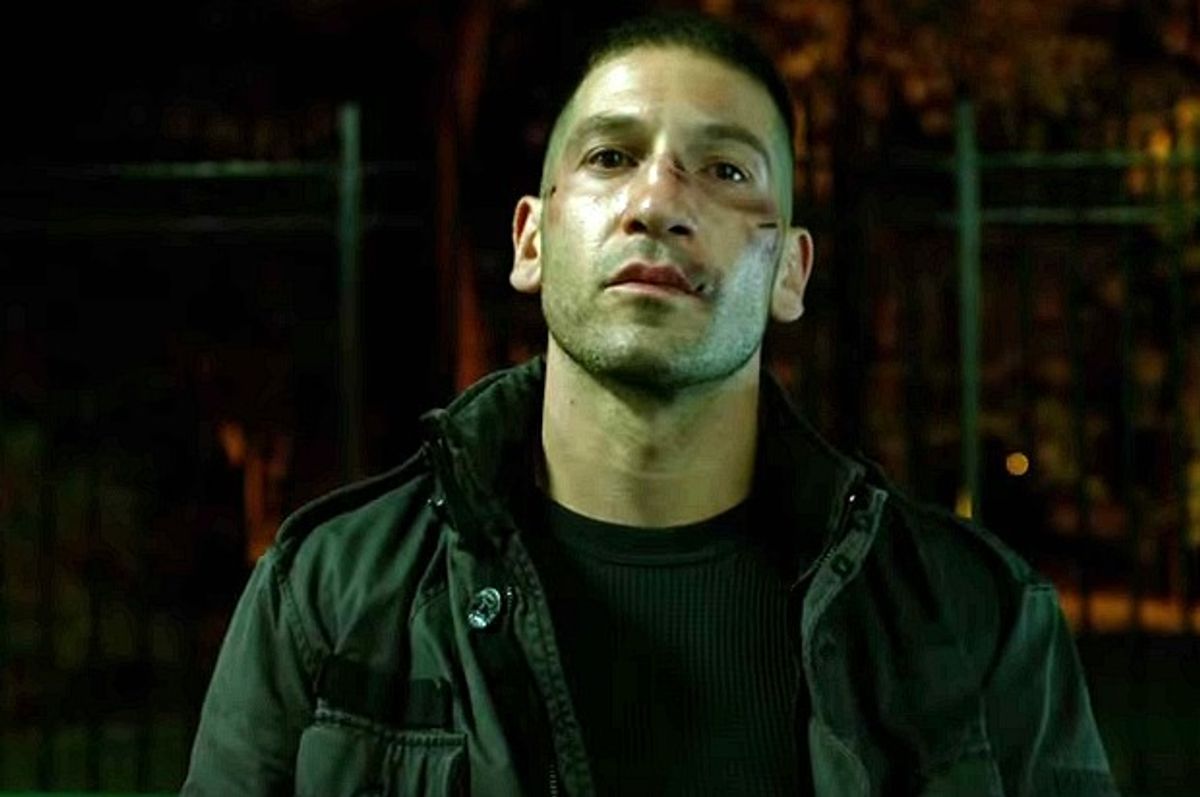 Frank Castle, aka the Punisher, recently debuted on season two of Netflix’s “Daredevil.” Castle is an unusual “superhero” since, as James Hibberd wrote in “Entertainment Weekly,” the Punisher “is like a walking NRA ad who hunts down and executes everyday street criminals and gang members, not just supervillains and their henchmen.” Unlike Batman, Spider-Man, and just about every other comic-book hero, Castle not only kills his enemies, but he loves killing them. Since, much like Dexter, Castle only kills bad people, his entire existence would seem to glorify guns, murder, and war.

But if you look a little deeper into some of the better Punisher stories, there’s another message that’s the opposite. Frank Castle, who first appeared in 1974 Spider-Man comic, was a product of Vietnam who learned to love killing in a senseless war. When he returned from the war, traumatized and adrift, the death of his family just gave him an excuse to go back to what he did best. As explored in powerful stories like Garth Ennis’ “Born,” there’s a subtle anti-war message underneath all the mayhem and skull shirts: wars, especially unnecessary ones, turn men into monsters, and we don’t do enough to help them turn back. Despite the anti-war message, Castle is also a tribute to real-life soldiers who do the unthinkable for (hopefully) good causes.

If you’re not familiar with the Punisher, he has an origin similar to Batman’s. It’s been retold many times, but Castle is always having a picnic in Central Park with his wife and two children. Sometimes the killers are random scumbags; other times Castle is a cop and the shooters are his corrupt colleagues. Whatever the details, Castle’s world is shattered when criminals gun down his family, leaving only him alive. So Castle becomes the Punisher, a vigilante with a skull on his chest who murders criminals: lots of criminals. He’s probably the most prolific serial killer in the Marvel Universe—or a close second to planet-eater Galactus.

In 2003’s “Born,” writer Ennis and artist Darick Robertson show Castle pre-Central Park in Vietnam. As Captain Castle, he’s the last man who gives a shit at Firebase Valley Forge, where the other Marines are simultaneously thankful to be on Castle’s side and scared of what he’s become. As one Marine puts it: “I will not fall in love with war like Captain Castle.” While Castle’s fellow Marines wait out the clock for the war to end, the future Punisher continues his assaults on the enemy and anyone within the U.S. military who isn’t 100% committed. He leads a general who wanted to close the base into sniper fire, and strongly considers fragging a colonel who has given up on the war. So it’s no wonder that Castle responds to his family’s murders with an endless war on time. Being the Punisher isn’t really about revenge: it’s about having an excuse to keep doing what he learned in Vietnam.

In the later Punisher story “Valley Forge, Valley Forge,” Ennis returns to the events of “Born” through book excerpts of “Valley Forge, Valley Forge: The Slaughter of a U.S Marine Garrison and the Birth of the Punisher.” That book was written by the brother of a Marine in “Born” who was sure Castle would help him survive the war, but was wrong. These book excerpts are just as effective as the supplementary material in more heralded comics like “Watchmen.” One passage sums up the horror at the heart of the Punisher and how it relates to the cost of war: “He’s like all the other terrible things that came out of that war—the broken homes and the suicides, the cancer, the babies born deformed from the chemicals that were sprayed on the jungle. All the horror that our men brought back from Vietnam—the ones that came back, anyway—the Punisher is all of it, gathered together into one disgusting monster.”

Despite that description of Castle, Ennis is a writer with tremendous respect for veterans that shows in many of his comics. “Nick Fury: My War Gone By”—which features a cameo by Captain Castle—put Marvel superspy Fury at the scene of major (and dubious) events of the Cold War. Ennis has written many straight-up war comics, including the current AfterShock Comics series “Dreaming Eagles,” in which a black World War II veteran tells his son what it was like to fight German planes and American bigotry. When Ennis writes about war, he still has the crisp dialogue and black humor of projects like “Preacher,” but he brings a ton of research and respect. Even in the absurd world of “Preacher”—which features a hunt for God and a character named Arseface—the most honorable character was Jesse Custer’s father, another Vietnam veteran. And Ennis shows respect for veterans through the Punisher’s better qualities, such as his clarity, loyalty, and freakish level of competence—traits seldom shared by those who send people to war.

That same respect for the military and skepticism for war can be seen in the best Punisher movie so far, which isn’t a Punisher movie at all: “American Sniper.” In addition to numerous Punisher homages, 97% of the movie would work as an actual origin for Frank Castle. The real Chris Kyle was a Punisher fan, as he wrote in his autobiography: “…we adapted his symbol— a skull— and made it our own, with some modifications. We spray-painted it on our Hummers and body armor, and our helmets and all our guns. And we spray-painted it on every building or wall we could.” That skull appears often in American Sniper, and one of Kyle’s fellow SEALs is seen reading a Garth Ennis Punisher comic. In addition to these tributes to Kyle’s Punisher fandom, “American Sniper” echoes Castle’s experiences: the skill at killing, the erosion of his soul, the PTSD, and the inability to relate to his family, or just about anyone, on a human basis.

I’ve seen the first 8 episodes of the new “Daredevil” season, and I’m glad to see the writers have taken many cues from Ennis’ Punisher stories. Many characters—and the show itself—give proper respect to Castle’s service and, by extension, all veterans. Jon Bernthal’s performance is perfect: his Castle, who served in the Middle East instead of Vietnam, is scary, scarred, and soulful. Netflix’s Punisher is further proof that Castle is more than a cathartic fantasy: he’s a reminder that we need to take better care of our real-life Punishers when they come home.