Hate is alive and well in North Carolina: State Republicans overturn an anti-discrimination law because of an urban legend 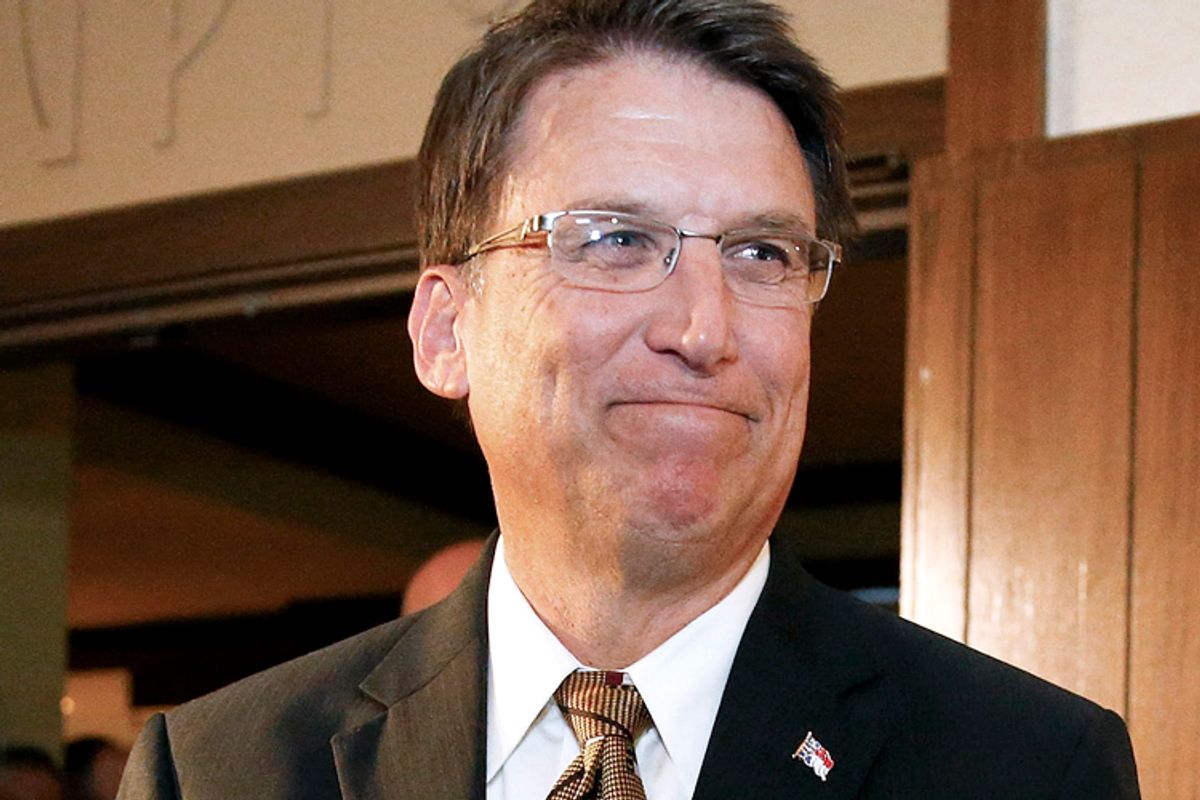 So much for the Republican conviction that small and local government is better: North Carolina Republicans were so offended that the city of Charlotte passed a local non-discrimination law that they convened a special legislative session to block the city from doing it. The city ordinance bans public places from discriminating against people based on sexual orientation or identity, which is quite obviously the reason that Republicans oppose it. Gov. Pat McCrory signed the bill overturning the city ordinance Wednesday night.

Since homophobia is quickly becoming socially unacceptable, North Carolina conservatives had to come up with some disingenuous excuse for this shameful behavior, and the one they latched on to is  a completely bonkers urban legend: That straight, cisgender men put on dresses and lurk in bathrooms, waiting for women and children to rape. Conservatives, in a strike against logic that is low even for the right, believe that this supposed behavior of straight, cisgender men somehow justifies discrimination against gay and transgender people.

The Charlotte ordinance is "going to open the door for people with malicious intent who would masquerade as transgenders to come in and actually take advantage and have access to our kids," Donna Eaton of North Carolina said during testimony.

Conservatives love their flimsy pretenses, of course, but this one is even flimsier than usual. They would have you believe there are men out there who have no problem breaking laws against rape and child molestation, but are going to be stopped by a law that says you can't go in the ladies room unless there's an "F" instead of an "M" on your birth certificate. Gotcha.

Needless to say, there is literally no evidence that this is actually a thing that is happening in the world. Not that rapists never hide in bathrooms. It's happened. It's just that they don't go to the effort of putting on a dress and pretending to be trans to do it. They just wait until no one is looking and sneak into the restroom, which is a lot easier.

But the fact that this is a pretense is easy enough to reason out with old-fashioned logic. While it's a myth that men dress as women to attack children, what is not a myth is that thousands of men, over the years, have used their membership in the Catholic priesthood as cover to molest children. But North Carolina Republicans don't want to ban the priesthood as a precaution, despite the fact that there's way more evidence that priests are a threat to children than mythical men-in-dresses.

To make it worse, forcing trans people to use the wrong bathroom actually does make people feel unsafe. As 15-year-old Skye Thompson, who is trans, explained during testimony, being forced to use the women's room can be a humiliating and unsafe ordeal for him.

"I've dealt with bullying my whole life and now I worry that my own state lawmakers are bullying me as well. I feel bullied by you guys," he said.

And while conservatives are preening about how they supposedly want to make cisgender women feel safe, the blunt fact of the matter is making trans men use women's rooms is a piss-poor way to do it. Because they are, you know, men. As trans activist Michael Hughes demonstrated in a series of selfies taken in women's restrooms, conservative policies are actually about putting men into women's rooms, not keeping them out.

Let's keep this message going! We still have a lot of work to do! #wejustneedtopee #occupotty #translivesmatter pic.twitter.com/HvZkYt7hfs

If sexual assault is really a concern, then forcing women to use men's rooms is a strange way of going about things. Most men wouldn't, but there are men out there who would treat the sight of a trans woman in the men's room as an invitation to assault.

And while there is no evidence of men in dresses lurking in women's restrooms for raping purposes, this conservative trans hysteria has already led to one ugly incidence of sexual harassment verging on assault.

A city councilman from Fayetteville, Arkansas, got into hot water this week, after he was accused of harassing a woman who worked in a local restaurant and demanding that she "prove" that she is a woman to him. The woman's friend posted on Facebook about the incident, writing, "He then explained that he was a man and could prove it by dropping his pants and showing his penis."

La Tour denies that he was threatening to whip out his penis, instead claiming that he meant to suggest that his birth certificate was the proof he was referring to. The woman in question was not trans. Not that this would justify or even moderate the harassment if she were, but it just goes to show that this conservative obsession with policing people's gender actually sows confusion and discord, even as they claim they are trying to prevent that. It's far easier and better for everyone to simply accept people as the gender they identify with, instead of trying to nose around in people's pants and background for no real purpose whatsoever.

It's clear there's no sincere conservative interest here in safety, much less reducing sexual assault rates. Conservatives turn to the bathroom thing because bathrooms are where we retreat to do private things. They can invoke that sense of vulnerability to generate pointless fear and hysteria, all in service of their real goal, which is promoting discrimination and abuse of LGBT people.

If you have any doubt about that, consider the fact that conservatives used the exact same narrative in the mid-20th century to justify racial segregation. "While segregationists frequently claimed racial integration would grant black men sexual access to white women," Gillian Frank at Slate explains, "white women also emphasized that contact with black women in bathrooms would infect them with venereal diseases."

Clearly, the purpose of bathroom panics isn't a sincere concern about safety, but about provoking people's latent anxieties about bodies and sexuality to justify bigotry. The right did it to black people, and now they're going to LGBT people. Rapists aren't pretending to be trans so they can attack women in bathrooms. And Gov. Pat McCrory and the state legislators that voted for this should be ashamed of themselves for legislating based on nothing more than a stupid urban legend concocted by bigots.