God bless John Kasich: The Ohio governor has turned into quite a gift to the Democrats

Kasich defies calls to quit — and the longer he stays in, the more likely it is Trump will be the GOP's nominee 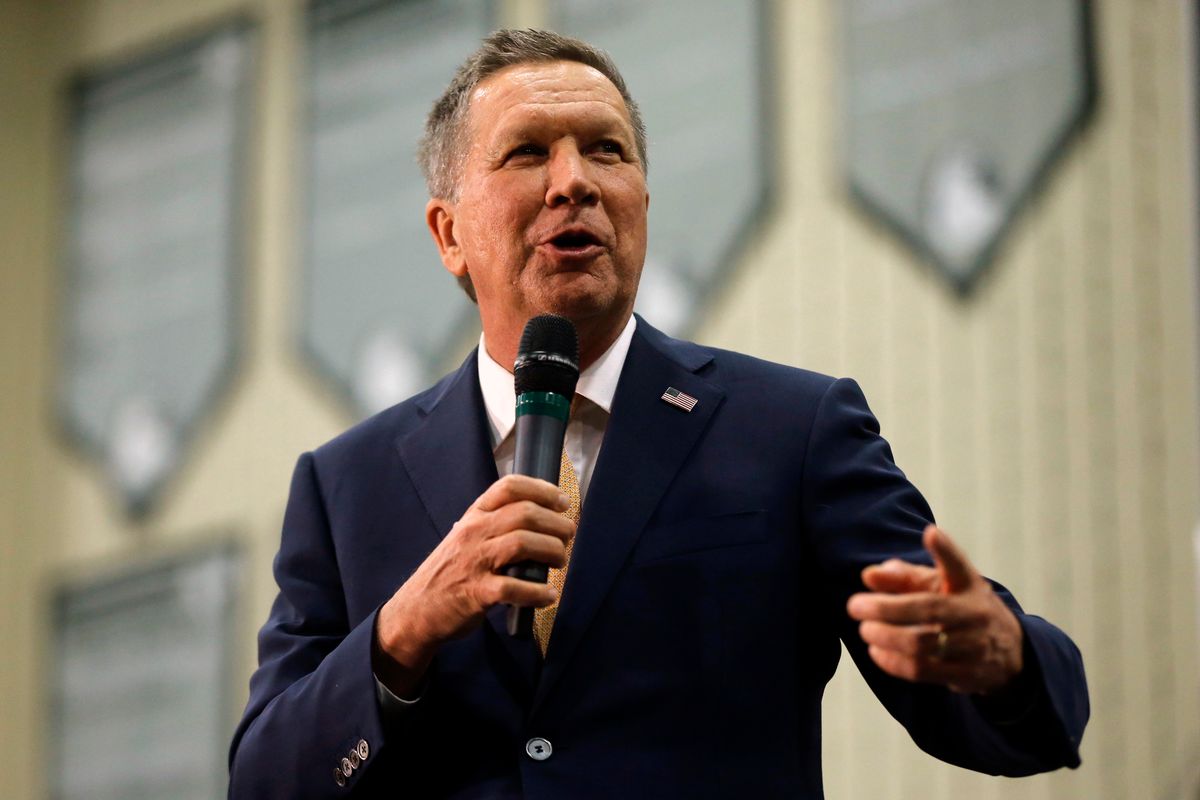 “I'm not going anywhere. Am I spoiler? Of course I'm not a spoiler... If I'm the only one who can beat Hillary in the fall, why would anybody say I should leave? I mean that's just – that's nuts!” -- John Kasich

It must be fun, being John Kasich. Up is down, down is up, losses are wins, and reality, like math, only counts if it's convenient. The Republican governor has done nothing but lose primaries since they began in February, the lone exception being his home state of Ohio. But he keeps plugging away, totally undeterred by the inevitability of defeat.

Kasich's journey has been a curious one. As Stuart Rothenberg put it, “Kasich's campaign has bordered on the bizarre. He has survived for two reasons: First, he has refused to get out, no matter how badly he has done. And second, he has been so irrelevant that nobody attacked him, leaving him generally unscathed in a race where there is plenty of blood on the floor.”

I knew Kasich wasn't going anywhere after New Hampshire, where he lost by 20 points to Donald Trump but proceeded as though it was a landslide victory. Kasich has continued to lose, falling way behind in the delegate count. As it stands, he has no chance whatsoever of securing enough delegates to usurp Trump at the convention.

Ted Cruz is the only candidate who can dethrone Trump, and even that is extremely unlikely at this point. In order for Cruz to mount a viable challenge, Kasich needs to step aside. To make a contested convention a reality, Republicans have to prevent Trump from reaching 1,237 delegates. So long as Kasich and Cruz are splitting the non-Trump votes, however, it's nearly impossible to accomplish that.

Kasich knows this. Cruz knows this. Trump knows this. Anyone who can count knows this. But don't expect Kasich to surrender. He's not about to let a little math get in his way. He remains resolute: “Nobody is going to have enough delegates,” Kasich said recently, referring to the convention. “Then, when we get there, the delegates are going to have to figure out, No. 1, who can run the country, who has the record, and, three, who can win.”

First, it's not true that no one will have enough delegates. That's possible, but by no means a certainty. As of today, Larry Sabato projects that Trump will clear the magic number by two delegates. Of course, the one thing that would ensure Trump doesn't reach 1,237 is Kasich leaving the race, but he refuses to do so. Furthermore, even if they get to the convention, it's pure wish-thinking on the part of Kasich to assume they'll just hand him the nomination, despite the fact that he received a fraction of the votes Trump and Cruz have. Doing so would invite a revolt among the base.

As the Trump train inches closer to the nomination, Republican desperation is growing. According to a New York Times report, top Republicans, including Jeb Bush and Mitt Romney, are applying more pressure on Kasich, hoping he bows out in time to stop Trump. Although he was beaten handily by Trump and Cruz in Arizona and Utah, Kasich is clinging to his beautiful dream of becoming president one day.

An irritated Cruz became even more vocal after his latest primary win: “If this were a head-to-head race, a direct head-to-head race between me and Donald, I would feel very confident that we would get to 1,237. The complicating factor is John Kasich. It is unclear if Kasich will bleed off just enough votes to give Trump victories and delegates in states he would not otherwise have won.”

Cruz is delusional about reaching 1,237, but he's not wrong about Kasich's stubbornness. For Kasich, though, elections aren't terribly important – voters make mistakes, after all. On his view, he's the most theoretically plausible candidate, and therefore he should be the nominee. “The fact is I'm the only governor left standing, and the one with the most foreign policy and domestic policy experience,” Kasich told reporters earlier this week. “I'm the only candidate according to all the polls who can beat Hillary Clinton, which I think is what our purpose was.”

Here's another fun fact: Kasich is currently the third most desirable candidate among Republican voters – and that's only because the other candidates were wise enough to step aside sooner. But in Kasich's world, victory is nigh. He just has to hang in there until the will of Republican voters is subverted at the convention. And if that happens, the GOP will self-destruct overnight.

Which is why Bernie Sanders and Hillary Clinton send their warmest regards to the Kasich campaign.