The endless sleazefest of Trump vs. Cruz: How the National Enquirer became a battleground in the GOP primary

Are you honestly surprised that the Republican nominating contest has devolved into this? 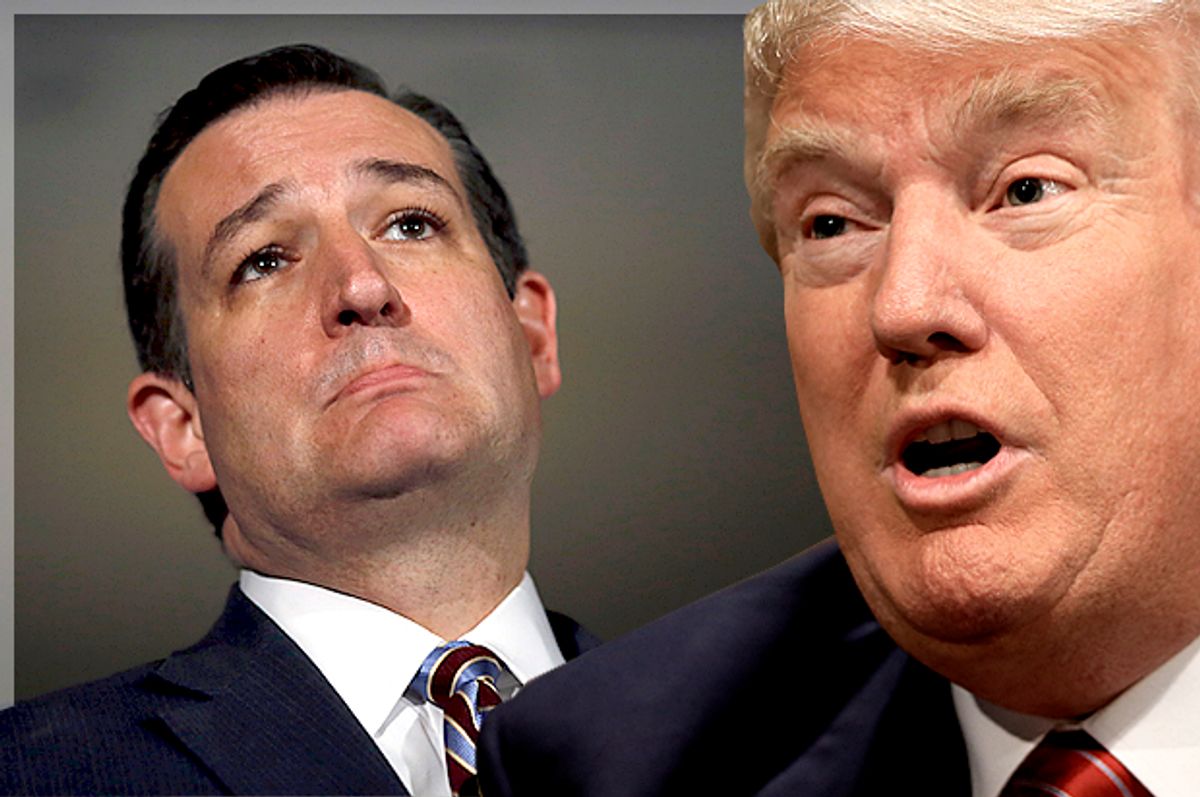 Now that I’ve put that image in your head, I respectfully request you put down your pitchforks and hear me out.

The National Enquirer has a story up claiming that the Republican candidate is juggling five different mistresses, and a “Washington insider” claims that “private detectives are digging into” his alleged affairs. Five mistresses! Plus a wife and two kids! Plus he’s a United States senator traveling the nation for his presidential campaign. When does he sleep?

Okay, I am in no way taking this story seriously, even if the Enquirer was right about the John Edwards adultery story a few years ago. (This week’s issue apparently also has a story claiming country singer Blake Shelton is hiding nine mistresses from girlfriend Gwen Stefani. Even for a famous musician, that is a lot of mistresses.)

There is speculation in the political blogosphere that the Cruz story was planted by Donald Trump. According to Gabriel Sherman at New York magazine, Cruz’s presidential rival has been friends with Enquirer CEO David Pecker for years. Last fall when Trump was struggling to handle Ben Carson’s surge in popularity, the tabloid ran a story that made Carson sound like the H.H. Holmes of Johns Hopkins. Now Trump is blaming Cruz for a super PAC attack ad featuring Trump’s wife Melania, and the Enquirer is suddenly making the evangelical Texan out to be John Kennedy.

Previously, the Enquirer also went after GOP candidates Jeb Bush and Carly Fiorina, while  Trump, whose own life is a tabloid publisher’s dream, has been treated to hagiographic stories about his awesomeness. And doesn’t that bit about “detectives are digging into Cruz’s affairs” sound a little like Trump’s famous claim in 2011, that he had investigators in Hawaii who were amazed at the information they were turning up concerning President Obama’s birth certificate?

Beyond all the speculation, though, the whole blow-up over wives and adultery this week challenged yet again a couple of assumptions about this election that I think are worth noting.

The first is the influence of super PACs. Remember when the unlimited amounts of money that donors could pour into them was going to essentially allow millionaires and billionaires to buy the election for a chosen candidate? Bernie Sanders has already partly knocked that assumption down with his campaign of small donors and his public renunciations of super PAC money. Jeb Bush’s super PAC spent over $100 million on his behalf and his run for the nomination fell off a cliff six months before he finally put it out of its misery.

To these two points, add this: Forget about how much money they raise, because super PACs are only as good as the people who run them. The PAC behind the Melania Trump hit, Make America Awesome Again, is run by Liz Mair, who has taken credit for the ad. It was aimed specifically at Utah, where the assumption seems to have been that all those Mormon wives would be offended by the fact that Trump is married to a former model who in a past life posed in the nude. Mair is a well-respected Republican operative for reasons that, after reading her Twitter bio, escape me.

But the ad appears to have had zero effect on the Utah caucus. While Ted Cruz still won the state handily — apparently, Mormons dislike Trump for a whole host of reasons that have nothing to do with his wife — it also backfired in a couple of different ways. One, it goaded Trump into attacking Cruz’s wife in a way that appeared to rattle Cruz, a man who seemed fairly unflappable up to this point. Two, with the GOP establishment consolidating (grudgingly) around Cruz, the ad ties him to the party as its choice for the nomination. This only reminds Trump supporters of how much the establishment hates their candidate and is desperate to stop him. It’s basically tossing gas on a fire, giving Trump a momentum boost. Oops.

It is possible that the GOP’s ultimate goal of denying Trump the 1,237 delegates he needs to claim the nomination outright will work, and the party will spend three days in Cleveland choosing a compromise candidate. (If that happens, look for all these new Ted Cruz supporters to drop him like a hot rock.) But no matter how much of an asshole Trump made himself look like this week with his nasty shots at Heidi Cruz, the GOP hurt its cause by opening up this can of worms. Once again, the party proves it is using an outdated playbook.