This is Ted Cruz's last stand: Why the Wisconsin primary could be his final chance

If Cruz wants to maintain a credible shot at unseating Trump at the convention, he probably needs to win next week 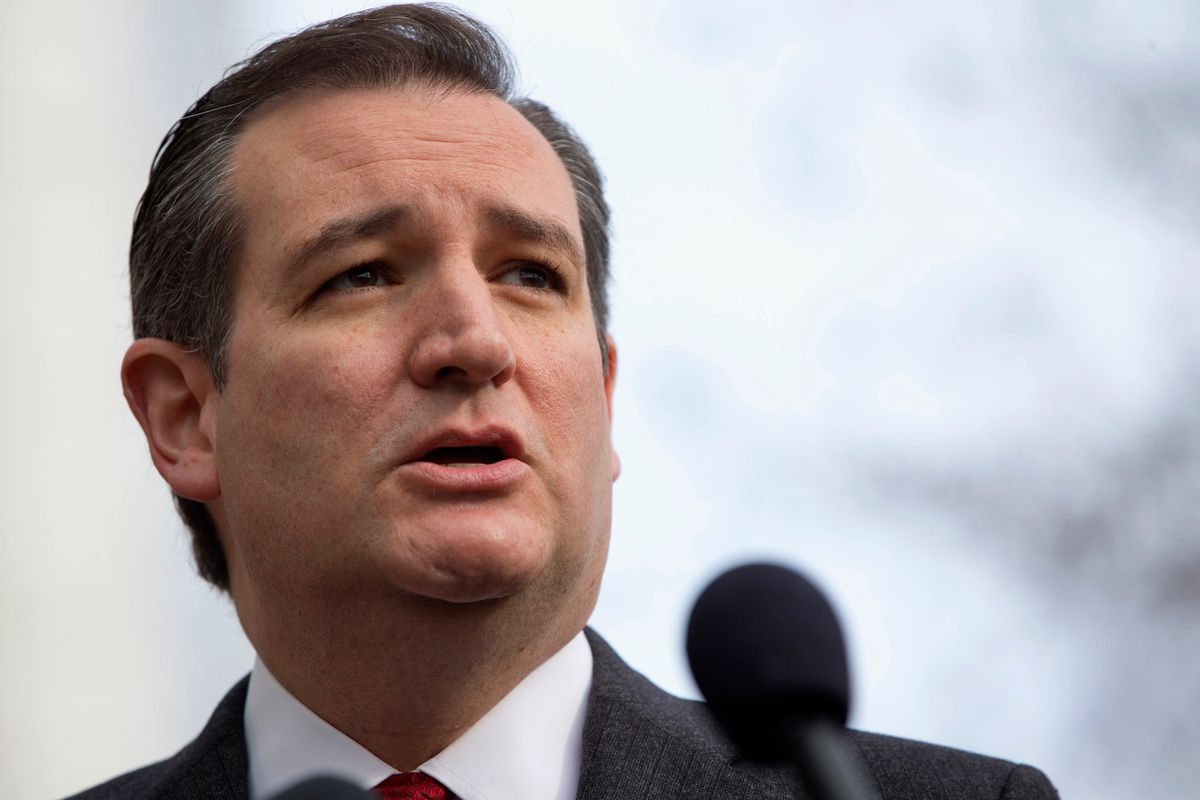 Republican presidential candidate, Sen. Ted Cruz, R-Texas speaks to the media about events in Brussels, Tuesday, March 22, 2016, near the Capitol in Washington. Cruz said he would use the "full force and fury" of the U.S. military to defeat the Islamic State group. (AP Photo/) (AP/Jacquelyn Martin)
--

It's not very generous of spirit to enjoy the conservative crack-up too much, but it's awfully hard for anyone on the left to beat back the schadenfreude these days. And frankly, considering just how malevolent the top two Republican presidential contenders are, it's doubtful too many lefties are losing sleep over it. Watching the various factions of the GOP run around in circles trying to figure out what to do about it is one of the most entertaining political spectacles in decades.

So far, Donald Trump has won 20 primaries and caucuses. Nobody who has won so many has ever been denied the nomination in either party. If it were anyone but him, the political professionals would pretty much be going through the motions by now, continuing to wage perfunctory primary campaigns but beginning to ready themselves for the the next phase of the campaign against the Democrats. But because Donald Trump is the presumptive nominee the party is still flailing about, trying to figure out a way to wake up from their nightmare.

Right now, all eyes are on Wisconsin which votes on April 5th. The conventional wisdom says Ted Cruz has to win there in order to even sustain the argument that he might be worthy of taking the nomination on the second ballot at the convention if Trump comes up short. This is something of a desperate gamble, but it's all they've got.

Yesterday, Governor Scott Walker said he planned to announce an endorsement "after Easter" and admitted that it will either be Ted Cruz or John Kasich. The smart money's on Cruz, as members of the establishment are all already swallowing their bile to get behind him as much as it pains them to do so.

This in-depth report from the Washington Post's Dave Weigel  calls Wisconsin "the Masada of the Stop Trump movement" with millions of advertising dollars pouring into the state and the highly influential local right-wing talk radio hosts all pushing hard against Trump. He quotes WTMJ's Charlie Sykes saying,  “the GOP’s current dumpster fire was set and largely fueled by some national talk show hosts who have decided that their infatuation with Donald Trump overrode their commitment to conservative principles." (And yet another fault line in the conservative movement breaks open ...)

The thinking goes that Wisconsin Republicans are more ideological than other states, having been through years of pitched battles between the governor and the Democrats, including a recall campaign, lawsuits and capitol protests. This leads some to believe that even though their Washington representatives would dearly love to see John Kasich as the vehicle to stop Trump rather than the much loathed Cruz, they understand the reality of the delegate math.  Cruz will be living in Wisconsin over the next week while Trump and Kasich spend some of their time looking toward New York. It's Cruz's crucible.

And what about the money? Last week, The Club for Growth came out for Cruz, which isn't really a stretch. He's a good dogmatic, tax-cutting ideologue and if it weren't for the fact that he's so personally unpopular, they might well have backed him earlier. And Jeb Bush's begrudging endorsement has shaken loose some of his donors for the Cruz crusade.

However, even as much of the ragged remains of the GOP establishment put whatever's left of their clout on the line for Cruz, it doesn't seem that anyone in politics besides the candidates and their wives have any confidence that either of the top two can win the general election. So the inevitable blame game is already taking shape.

The old school movement  conservatives like Richard Viguerie, who genuinely prefer Cruz, are having to deal with the fact that the math looks very bad for their man and they are trying to decide if they should go with Trump or try to preserve their philosophical integrity and either run a third party or stay home.  They don't see the "Washington Cartel" endorsement's coming Cruz's way as being sincere, and they're right. Their candidate is being used as a tool to sow chaos at the convention so the establishment can install someone from their own ranks. But they cannot abide the idea that anything they do could result in a Democratic victory in the fall.  One senses they are heading toward a reluctant acceptance of Trump.

Others are already looking beyond November to lay the groundwork for who will shoulder the responsibility for the debacle that's about to unfold. Activist Erick Erickson assumes that Trump is going to be the nominee and he is going to lose no matter what. He therefore rules out a conservative third party bid because he fears that it will be blamed instead of the Trump campaign. He writes:

If a third party rises up to take on Trump, they’ll be able to point out that this third party is to blame for Trump’s loss, not that Trump was always going to lose.

A lot of people need to be held accountable for the fraud being committed on angry, hurting voters. They’ve taken advantage of these voters’ anger and sympathies. A third party allows them to escape accountability and remain unscathed by the con-job they are helping pull over on the American people.

Frankly, a lot of careers should justifiably end when Trump loses to Hillary, but a third party effort against Trump will give them one more opportunity to lie, obfuscate, and escape accountability.

Meanwhile, according to former Obama advisor David Axelrod, some high level Republicans also assume a loss in November but would rather lose with Cruz so they can shut up the Tea Party faction once and for all:

"I don't like Cruz, but I can defend most of his positions with a straight face," one prominent Republican leader told me. "I don't know how I go on TV and make an argument for Trump." There is a potential bonus of a Cruz nomination, this party leader explained. For the past several cycles, conservative activists have complained that by nominating relatively moderate candidates -- Romney in '12 and Sen. John McCain in '08 -- the party spurned its base and depressed Republican turnout. "Let's have Cruz, and we will put that issue to rest," said this party leader, convinced that the Texan's appeal, pitched to evangelicals and the right, is too narrow to command a general election. "If it's Trump, there will be no resolution. Each side will blame the other for the disaster."

Ross Douthat in the New York Times predicts that there will be no real resolution for the party for some time to come:

A Trumpian schism probably wouldn’t lead to a full realignment, a real re-sorting of the parties. Instead it would likely just create a lasting civil war within American conservatism, forging two provisional mini-parties — one more nationalist and populist, concentrated in the Rust Belt and the South, the other more like the Goldwater-to-Reagan G.O.P, concentrated in the high plains and Mountain West — whose constant warfare would deliver the presidency to the Democrats time and time again.

Obviously, nobody knows how this will actually turn out. And Donald Trump has left a trail of  better politicians in his wake, so it would be extremely foolish for the Democratic party to rest on its laurels. He's got something and whatever it is, it's unique.  But he's also brought the Republican Party to an existential crisis which has the entire coalition forming a circular firing squad before the nominee is even chosen, eight months before the general election.

Did I mention anything about schadenfreude?