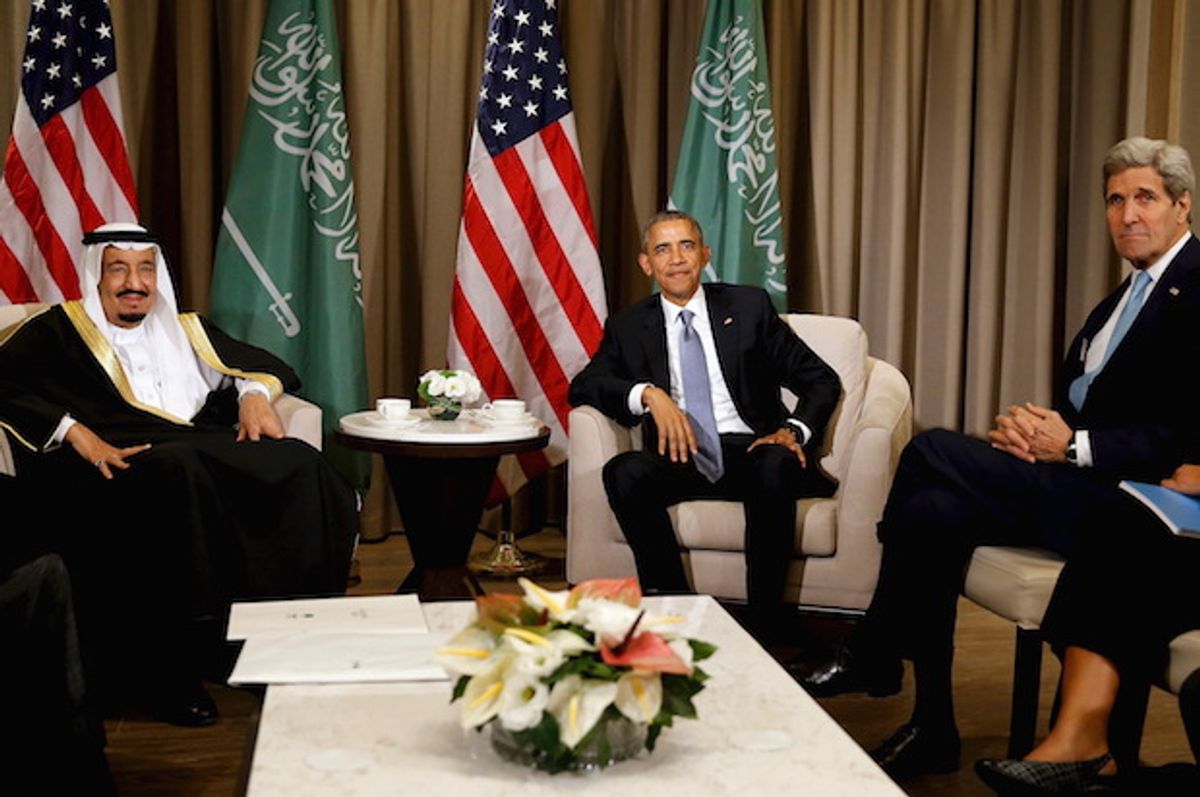 President Obama concludes a meeting with Saudi King Salman at the G20 summit at the Regnum Carya Resort in Antalya, Turkey on November 15, 2015 (Reuters/Jonathan Ernst)
--

Close U.S. ally Saudi Arabia sentenced prominent journalist Alaa Brinji to five years in prison for a series of pro-human rights tweets, according to a report by Amnesty International.

Brinji faced numerous charges for tweeting in support of human rights advocates and prisoners of conscience, and for calling for the right of Saudi women to drive cars.

The Western-allied theocratic Saudi regime, which governs according to an extremist, sectarian interpretation of Sunni Islam known as Wahhabism, does not allow women basic rights such a driving cars or traveling without the accompaniment of a male guardian.

Amnesty says Brinji, who has worked for several respected Saudi newspapers, is a prisoner of conscience, "imprisoned solely for peacefully expressing his views."

The sentencing "is a clear violation of international law and the latest demonstration of the Saudi Arabian authorities’ deep-seated intolerance of the right to peaceful expression," the leading human rights organization remarked in a statement.

Saudi Arabia convicted the journalist in its notorious so-called "counterterrorism" court, the Specialized Criminal Court, or SCC. Amnesty notes that, since 2014, "the SCC has sentenced many activists and dissidents to lengthy prison terms, and even to death, after grossly unfair trials."

In addition to the five years in prison, the Saudi "counterterrorism" court also sentenced Brinji to an eight-year travel ban and a fine of 50,000 Saudi Arabian riyals (approximately U.S. $13,300).

The Saudi dictatorship arrested Brinji on May 12, 2014. The regime has detained him since, initially in solitary confinement, and has not given him access to a lawyer.

"The sentencing of Alaa Brinji to a five-year prison term is utterly shameful," Lynch said. "He is the latest victim of Saudi Arabia’s ruthless crackdown on peaceful dissent, where the aim appears to be to completely wipe out any and all voices of criticism."

“Putting someone behind bars for peacefully exercising his legitimate right to freedom of expression, and defending the rights of others to do so, is a complete distortion of the very notion of justice," Lynch added. "The authorities must ensure his conviction is quashed and release him immediately and unconditionally."

In early March, the Saudi regime sentenced writer and Islamic scholar Mohanna Abdulaziz al-Hubail in absentia to six years in prison and a travel ban for his tweets.

The Saudi "counterterrorism" court charged al-Hubail with "insulting the state and its rulers" and "being in solidarity with imprisoned members of the Saudi Civil and Political Rights Association" on Twitter, as well as inciting and taking part in demonstrations and calling for the release of prisoners of conscience.

These punishments are relatively light compared to those typically meted out to dissidents, whom Saudi Arabia regularly beheads.

The regime kicked off the new year by killing 47 people in a series of mass executions on Jan. 2. Among those killed were renowned Saudi activist Sheikh Nimr al-Nimr, a leader in the regime's minority Shia Muslim religious community, which faces intense discrimination.

Salon interviewed Mohammed al-Nimr, the son of the executed Saudi dissident, who shared his story about fighting for democracy and justice in the oil-rich dictatorship.

In November, Palestinian poet Ashraf Fayadh was sentenced to death by a Saudi court for "renouncing Islam." Liberal Saudi journalist and blogger Raif Badawi was also imprisoned for “insulting Islam through electronic channels” in 2012, before being sentenced to 10 years in prison and 1,000 lashes in 2014.

Moreover, at least three young Saudi activists who were arrested as teenagers currently sit on death row in Saudi Arabia, having been sentenced to beheading for attending peaceful anti-regime protests. They have allegedly been tortured, and at least one was also sentenced to crucifixion.

Critics have compared the theocratic Saudi monarchy's religious extremism to that of violent groups like ISIS. The Saudi regime has spent more than $100 billion in recent decades spreading its fundamentalist Wahhabi interpretation of Islam around the world, particularly in poor Muslim-majority countries.

Meanwhile, the U.S. considers the Saudi regime, which sits on the world's second-largest oil reserves and has approximately $100 billion in active weapons deals with the U.S., a "close ally."

In early March, the U.S. State Department released its new fact sheet on Saudi Arabia, which insists the theocratic sectarian regime "plays a crucial role in maintaining security in the Middle East, due to its economic, political, and cultural importance and its strategic location."

The department said it works "with Saudi Arabia to support counterterrorism efforts and a shared interest in regional stability."

At the same moment, the U.S. State Department has also internally admitted that its Saudi ally "remains a critical financial support base for al-Qa'ida, the Taliban, LeT, and other terrorist groups." A classified 2009 memo signed by then-Secretary of State Hillary Clinton acknowledged that "donors in Saudi Arabia constitute the most significant source of funding to Sunni terrorist groups worldwide."

The European Parliament has likewise noted that "Saudi Arabia has been a major source of financing to rebel and terrorist organisations since the 1970s," reporting that "countries like Saudi Arabia, Qatar, United Arab Emirates and Kuwait do too little to stop rich and conservative donors from financing terrorist organisations through charitable and religious institutions."

As Saudi Arabia imprisons yet another critic, Amnesty International once again condemned the regime for another politically motivated imprisonment.

"Saudi Arabia must be held accountable for its gross and systematic violations of human rights," James Lynch said.

The human rights official continued, emphasizing that the Saudi monarchy's "international allies, who seek to collaborate on security and intelligence, have to confront the fact that using the pretext of 'counterterrorism' the government's draconian crackdown has eradicated virtually all forms of peaceful dissent in the country."