What if Batman wasn't a jerk? The Dark Knight should be more like Yoda, less like Kylo Ren

In "Batman v. Superman," he's darker than ever—but Batman doesn't have to be a psycho who won't grow up 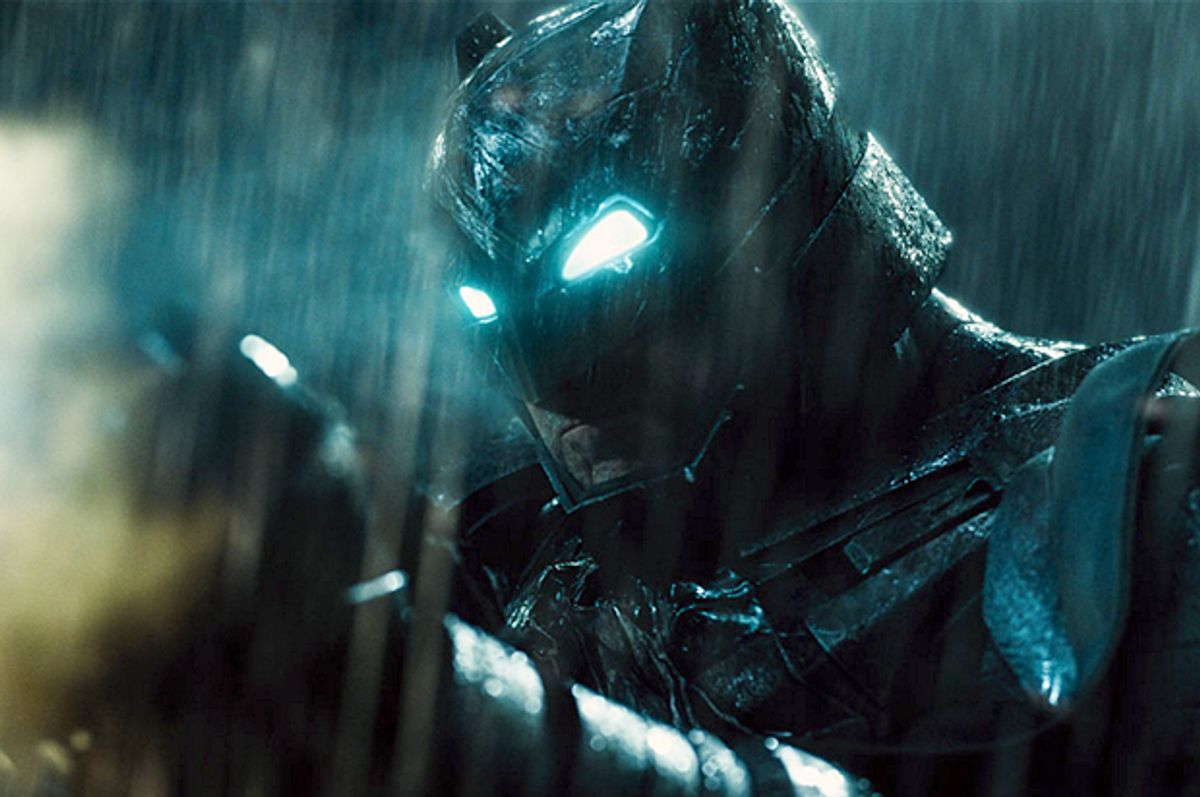 In “Batman V Superman: Dawn of Justice,” the Dark Knight is darker than ever: he’s an angry, vengeful wacko who gets off on torturing criminals and himself. Taking a cue from Frank Miller's version of Batman as a semi-fascist Clint Eastwood type who enjoys crippling punks, the Ben Affleck Batman is the scowliest ever, which is really saying something. He's even scowlier than the current angst-ridden version of Superman, who is about as far removed from any recognizable version of Superman as can be, but that's another story.

In a world of mass shooters, Men's Rights activists, Donald Trump supporters and Internet commenters, the last thing we need is another angry dude. But does Batman have to be an angry jerk? Is the only alternative the goofy Adam West version or (admittedly awesome) LEGO Batman?

As seen in a tremendous run by Scottish writer Grant Morrison from 2006-2012, Batman doesn't have to be an emotionally stunted man-baby or goofy cartoon. Morrison had the rare insight that someone with the experience, martial arts training and intelligence of Batman would be very unlikely to still be lashing out at the world like a high-school sophomore. Morrison's Batman proves that even the most angsty hero can grow up and become an adult. If only Batman movies (not to mention the rest of the world) would do the same.

Morrison’s grown-up Batman—who appeared in several titles such as “Batman,” Batman and Robin” and “Batman Incorporated”—evolved from a unique approach to continuity. Comic-book continuity is notoriously a snakepit of contradictory, repetitive and inane details that pile up for decades. While continuity trivia appeals to the Cliff Clavin types who have dominated comic book fandom for too long, appeasing such fans rarely makes for the best stories. This is why so many of the best comics stories take place in alternate universes or elseworlds, which have given us great stores like “Kingdom Come” and “Superman: Red Son” and great characters like Spider-Gwen and Miles Morales as Spider-Man. Good things tend to happen when you ignore continuity.

But Morrison took the opposite approach: He decided that every Batman story, in every medium, counted. As Morrison put it in the introduction to "Batman: The Black Casebook": “I imagined a rough timeline that allowed me to compress 70 years’ worth of Batman’s adventures into a frantic 15 years in the life of an extraordinary man.” That meant Morrison’s Batman has not only seen Bane break his back and the Joker kill Jason Todd, but he had encountered bizarre characters from previously ignored stories like the Rainbow Creature and fifth-dimensional imp Bat-Mite. This all-encompassing approach led to many fresh and enjoyable stories and situations, such as the inclusion of Lord Death Man (a villain from Japan’s "Batmanga") and even some nods to the Adam West Batman (such ridiculous adventures were explained by too much exposure to villainous gases and poisons). But giving Batman his whole history demanded someone who could handle it: a wise Batman who’s grown beyond his issues.

One of Morrison’s most adultifying moves was giving Batman a son: Damian Wayne, whose mother was femme fatale Talia al Ghul, daughter of immortal ecoterrorist Ra’s al Ghul. Morrison discovered the possibility of a child between Batman and Talia in 1987’s “Son of the Demon,” another story that didn’t “count” to that point. Damian was one of many Morrison revivals, but likely the best. Batman finds out about the existence of Damian when the kid is 10—Damian has been raised by the League of Assassins, and he’s an angry killer who beheads a criminal and almost murders Robin in his first appearances.

Damian’s presence allows Batman to mature in a few ways. There’s nothing like having a kid to make people grow up: parenthood and mopey self-absorption don’t pair well. Damian’s very existence embodies Batman’s long history while pointing out something many comics still skirt around: holy intimacy, Batman has had sex! Also, Damian’s initial angry whining is a perfect satire of how Batman (including the glowering Batffleck) all too often acts. Having an angry child helped Batman stop being one.

Such stories went against the tide of post-Miller comics that portrayed Batman as a semi-deranged loner who pushed away friends and constantly fought his own demons. Morrison found this unconvincing given Batman’s training. As he said in an interview with io9: "I never really subscribed to the idea that Bruce was insane or unhealthy… Bruce Wayne's physical and psychological training regimes (including advanced meditation techniques) would tend to encourage a fairly balanced and healthy personality." In other words, Batman’s demeanor should be much closer to Yoda than Kylo Ren.

Refreshingly, Morrison’s Batman gets to show a greater degree of wisdom and wider range of emotions than usual. Far from a grumpy loner, this Batman has friends and allies around the world. He actually enjoys being Bruce Wayne, taking a page from the (as Morrison puts it) “hairy-chested love-god” Batman stories illustrated by Neal Adams in the seventies. Even fighting the madness of the Joker is approached practically. Morrison mines a 1963 story called “Robin Dies at Dawn,” in which Batman participates in an isolation experiment meant to study the stresses placed on astronauts. In the Morrison version, Batman went to an extreme mental place just to figure out the Joker. This Batman thinks of everything; even when he loses his marbles, it’s part of a plan.

Since Morrison’s run ended, Batman has unfortunately gotten dumber and angrier in the Scott Snyder/Greg Capullo comics, losing his history and maturity. As his run ended, Morrison saw this return to form happening in other comics, as he mentioned in a Newsarama interview: “The stuff that Scott [Snyder] is doing, that John Layman is doing, everyone is starting to get bleak again. You cannot bring Batman into the light, is basically what I’ve learned. So we wanted to acknowledge that in this last issue – it’s quite nightmarish in a way.” At the end of his run, Morrison killed off Damian and Talia, leaving Batman with two fresh deaths that mirror his parents’ deaths. A six-year run of comics built on history and progress ended up back at bleak, mopey, angry square one.

Such reversion to the status quo is inevitable in comics, which are marketed to teenagers of all ages. For Batman to become a real adult permanently would be like Archie definitively choosing Betty or Veronica: it’s not going to happen. But even though Morrison’s run didn’t leave Batman in wise adulthood, it showed the power of a non-psycho, emotionally mature Batman. Another part of Morrison’s legacy is Damian, who has since returned from the dead and matured quite a bit himself. These kinds of small changes to the massive mythology of comics are hopeful in a way that clown-punching and Bat-moping can never be. The real world is overflowing with immature, angry fellas. It seems like the top superhero should have better emotional balance than the average Twitter harasser or Trump rally brawler.

After all, if Bruce Wayne can travel the world for years learning the most dangerous martial arts and precise deductive skills, surely he can spare an hour a week for therapy.