Ethan Hawke on coping with failure, success and insecurity: "Sometimes I feel that my whole life has been a war with my nervous system"

Salon talks to Ethan Hawke about managing pain, Chet Baker, and why he tries to "spiritually marry" his directors 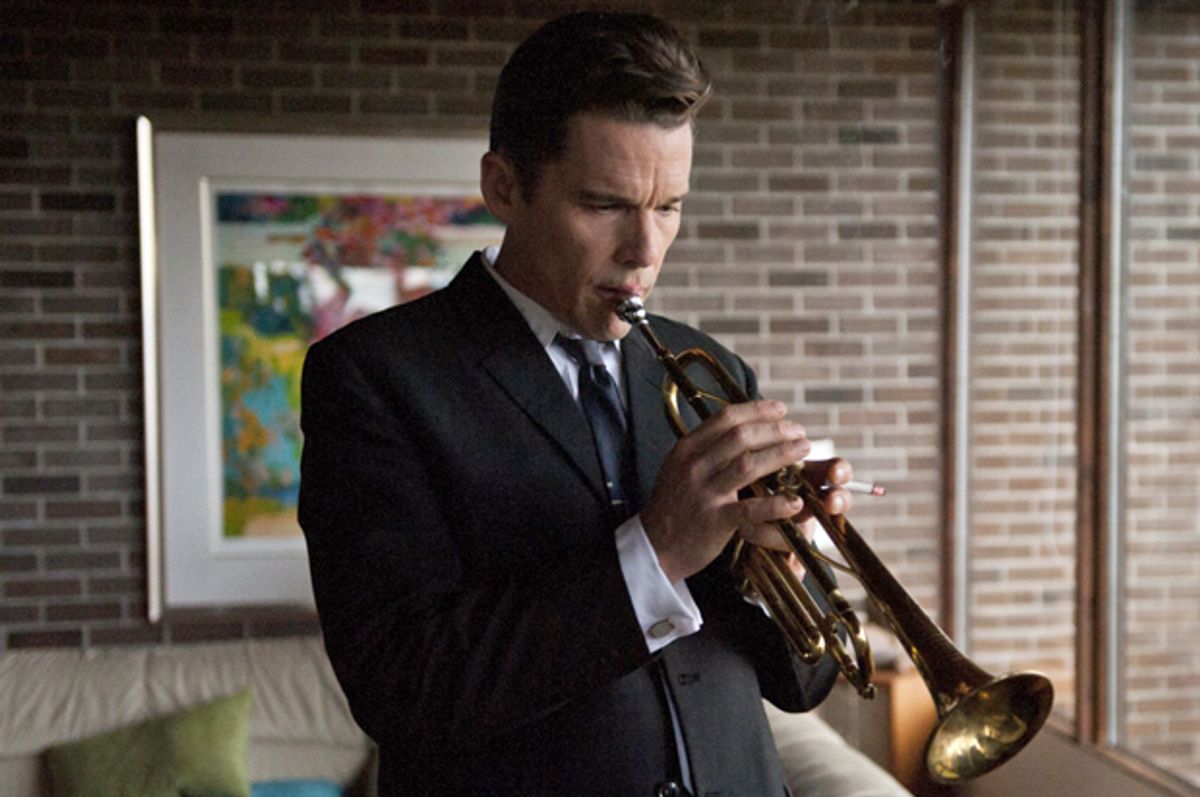 Back in the ’90s, Ethan Hawke and Richard Linklater developed a movie about Chet Baker in his 20s. It never materialized. Two decades later, Hawke has fulfilled his destiny and picked up the trumpet in “Born to Be Blue.” This time around, he’s working with director Robert Budreau to paint an impressionistic picture of the legendary jazz trumpeter’s 40s, imagining Baker as he tries to clean up his act.

We sat down with Hawke at South by Southwest in Austin to discuss the role of drugs in creativity, the idea of disappearing into a character, and honoring the essence of Baker’s music.

Talking about Chet Baker, you said something along the lines of, “The drugs don’t help. They just help you deal with the anxiety.”

Yeah, there’s no talent inside the drugs. The talent is inside you. You know, sometimes people love to apply a lot of judgment to it, and I’ve lost several friends to drugs and alcohol. So I certainly don’t look at it with a tremendous amount of sympathy, but you also have to understand that a lot of people are in a lot of pain. How they manage their pain and their confusion and their depression and their loneliness and their insecurities — those things are painkillers. When you’re hurting, it’s very human to want to stop hurting.

Your whole being goes into what you do. I think for a guy like... I don’t even know Chet Baker. I don’t want to talk about him specifically as a man. The two great actor-artists of my generation that influenced me are River Phoenix and Philip Seymour Hoffman, who both died of heroin overdoses. It’s just kind of brutal. You see there was a ferocity of honesty in both of those guys. They just despised lying. The world is full of a lot of little lies you have to tell to get through the day. For a certain amount of people who are extremely sensitive, it’s really hard. If you don’t have the proper tools inside yourself to navigate those waters, they can be pretty treacherous waters.

And you add into the mix the immense success and failure, because the higher you go, the higher you fall. We all know that everybody’s equal in our hearts, so there’s a certain sense of fraudulence you have when you’re being celebrated too much. I think there’s some kind of base note that... we don’t know why we’re born, we don’t know where we come from, we don’t know what kind of magic is running the world. So to take responsibility for it like you’re somebody fabulous or God’s working through you — you know there’s a lie manifest in there. That creates an immense amount of insecurity, the more success you get. Then failure is even more dangerous.

I know that’s something present for everyone in the arts. How does that play out for you personally?

With much difficulty. Sometimes I feel that my whole life has been a war with my nervous system. The person you want to be with the person you actually are is sometimes so disappointing that it creates... you find yourself tripping on yourself. I find that when I was younger, I had a lot more hubris. To put it nicely, I just loved acting and I loved the arts! I just wanted to be a part of it, and I couldn’t imagine any downside. So I just did it. I remember making my Broadway debut. I remember walking out onstage and thinking, “Wow, I’m making my Broadway debut! Not nervous at all. This is awesome!” Just had that kind of attitude.

As you get older and you start to care more, you realize how rare the opportunities to contribute are, how much you value the arts, and how much responsibility comes with any success. There’s this voice inside you. Publishing something, you go to the bookstore and see all the great novels nobody’s read. The records ... you go on iTunes and go, “What?!? Why would I bother making a movie; there are so many great movies nobody’s ever seen!” That voice can become kind of crippling to me. “Who are you? What are you pretending to do?” But you have to fight through it. Each generation has to keep talking to each other. That’s how I solve it with myself. If anybody acting is worthwhile, then it’s worthwhile for any of us to try. If none of us try, none of it will ever happen.

It’s up to the culture to decide what’s really of value, and God knows that changes. We’re rewriting the past all the time. Chet Baker is an interesting example. He loved to sing and wanted to do it, but he was wildly made fun of for doing it at the time. Now those records are still selling. The people making fun of him, that’s gone. I’m really glad that he believed in himself to do it.

That’s one of the interesting things about especially music. Because of what happened to him, his music was at times incredibly personal. Sometimes when you’re really personal, people don’t always understand it. Especially initially.

Especially if you’re really sincere. People are thrown by it. If you’re ironic or glib or cool, people can kind of understand it. If you come out and go, “Hey, this is my heart here. Hold it in your hands”... people are like, “Uhhhh, I don’t want to hold your heart.” But it’s powerful and it’s moving. Over time, they can start to handle it.

One thing that I’ve always respected about your career is that, while you’ve done a lot of different kinds of movies, you’ve never gotten away from telling personal stories.

Those are my favorite. I’ve kind of understood my own limitations as an actor. One of the ways I can push myself to be better is to work inside lots of different genres. The nice thing about my brain is that I actually love all the genres. It was exciting to me to be in a good horror movie. I was really proud of “Sinister.” It’s hard to make a good scary movie. There’s a time and a place for a lot of different kinds of movies. There’s a time that it’s really right to tell a great scary story. Then there’s a time to tell a deeply romantic, artful, soul-expressing movie like “Before Sunrise.” There’s a time for a good cop picture.

So I’ve been challenging myself throughout my career to keep hunting and searching for different genres to play inside. I also like directors. Each director has different strong suits. I see myself as a little bit like a first mate on a ship, when you’re acting. The captain is gonna sail this thing. We’re gonna get across the ocean, but you need a good first mate as kind of the tip of the spear. That’s what the leading actor is.

I know every actor feels a little bit differently about how you interact with everyone else on the crew. Sometimes it can be more like, “It’s my job to be me, and it’s his job to corral me.” So it’s interesting to hear you talk... but I guess that makes sense when you have relationships with directors like Richard Linklater.

You know, I’m sure a lot of good work’s been done the way you said. “I’m gonna be a wild animal!” I bet you a lot of good work’s been done. For me, there’s a great Brando quote. He said, “You have to spiritually marry your director.” You have to be so in touch with their imagination that you can help it manifest. If you resist it, the whole thing can break down. I just like to think that I try to spiritually marry the dude or the woman I’m working with.

[Laughing] Yeah, sometimes I have three wives in a year.

I like that. I guess that’s what is really intriguing, that you’re not just talking about one type of director either. You’re talking about trying to get in the head of…

Like when you work with the Spierig brothers, who did this movie I did called “Predestination” — that’s very different than the Richard Linklater brain or the Antoine Fuqua brain. The Spierig brothers are intense; deeply saturated inside the history of cinema. But they love sci-fi, and they love good sci-fi. We spent weeks in a room just like this one, spinning through various timelines and equations, because we all agreed that we’d never seen a time-travel movie that actually made sense. Could we try to do it? Could we try to all troubleshoot each other? “No, that doesn’t make sense! That couldn’t happen. That wouldn’t be.” It was a movie where our dream was that the third time you watched it would be better than the first time you watched it. Time-travel movies need to be able to work—

And they very rarely do, because the creative team assumes the audience will give the benefit of the doubt. Most people can’t make sense of it in the first place. But it sounds like you guys weren’t…

I’m just saying, that’s the fun of acting. If you’re doing "Macbeth" on Broadway, the fun is to just get inside that world completely; dive into that language completely and see what that language does to you. It’s almost like an incantation. Each one of these movies is a prayer of sorts, and you’re the manifestation of the words. So you either cast a spell or you don’t, and a good movie casts a spell. I wanted, with the Chet Baker movie... if you lay down right now, you closed your eyes, and listened to three Chet Baker records in a row, you’d be in a mood. You’d be in some weird emotional place. A great musician does that to you. Well, the movie should do that. Whatever the movie does, it shouldn’t violate that. It has to conjure that mood.

So what was the first time you experienced something like that while working on a movie or a play?

There’s a scene in “Dead Poets Society” where Robin Williams writes on the chalkboard “I sound my barbaric yawp over the rooftops of the world.” It was this scene where I was supposed to make up a poem, and the director wanted to do it in one take. So we really got to play it out. It was the early days of the Steadicam. It was this new toy. And that was the first time I felt what acting was about and what was interesting about it. You think it’s gonna be about the celebration of personality or making you feel fabulous or important. But in fact, it’s like disappearing. It’s like being absolutely translucent. That’s what it feels like.

I see it in other actors. When somebody’s doing it really well, they just disappear. I’ve come to know that a great stage performance or a good take in a movie is when you can’t remember how it went. Whenever you think, “I did great,” that means you were self-conscious and full of yourself. Whenever you think you’re terrible, you probably were. But when you can’t remember how it went...