It wasn't "politically correct" when W. said it: Why Trump's Islamophobia is a dangerous American bellwether

The right has called Obama weak for preaching tolerance toward Muslims. What about when Bush did the same? 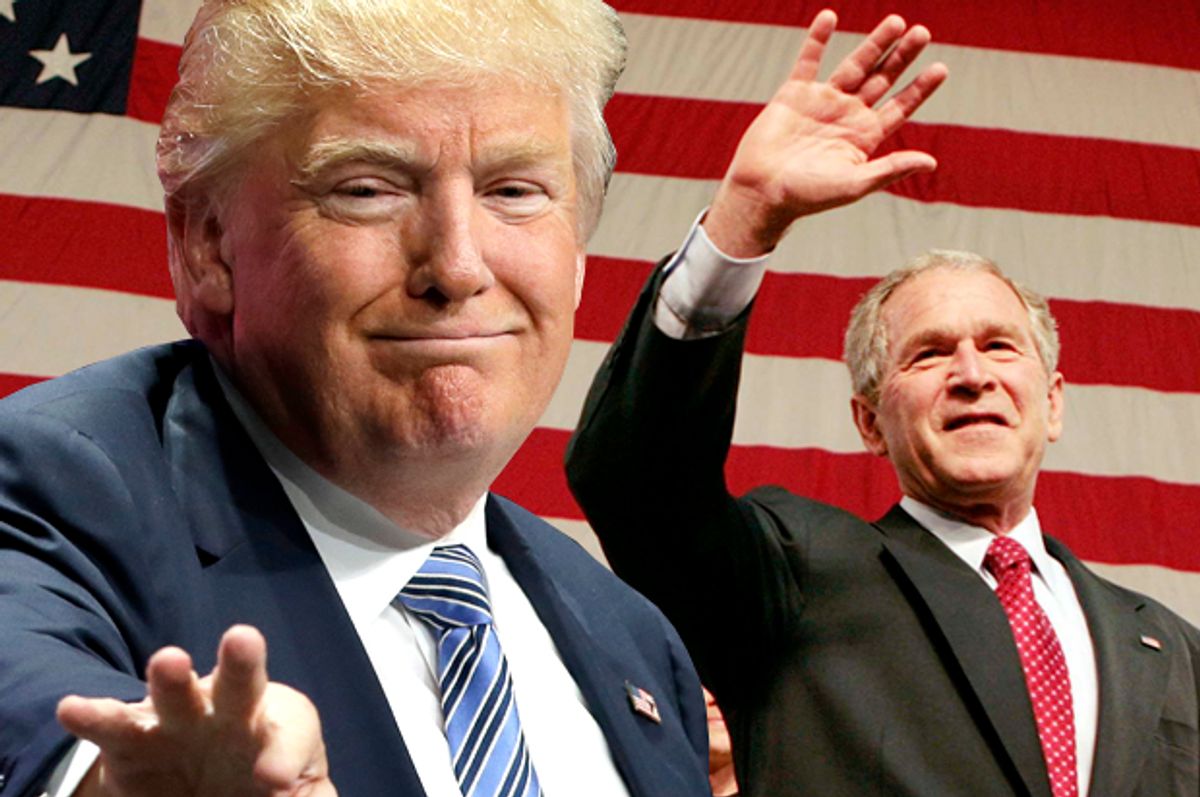 “Our nation is waging a war on a radical network of terrorists, not on a religion. And not on a civilization. As we wage this war to defend our principles, we must live up to those principles ourselves. And one of the deepest commitments of America is tolerance. No on should be treated unkindly because of the color of their skin or the content of their creed. No one should be judged by appearance or ethnic background, or religious faith.”

Back in 2002, when President George W. Bush made these comments at the annual White House Iftar Dinner, there was no outcry from his Republican colleagues for being too “politically correct,” or for avoiding the term “radical Islam” — which the president consciously refrained from using in speeches. No one questioned where the president's loyalties were, or whether the terrorists could be defeated if he didn’t constantly emphasize their twisted Islamic ideology. After invading one Muslim country and planning to invade another, the Bush administration considered it wise to emphasize that the United States was not at war with a religion, especially a religion with over 1 billion followers.

In another speech shortly after the attacks of September 11, at the Islamic Center of Washington, D.C., Bush condemned the Islamophobia that had emerged across the country, declaring that Americans who felt they could “intimidate our fellow [Muslim] citizens to take out their anger” did not “represent the best of America,” but “the worst of humankind.” Once again, these statements were not at all controversial. As the president of the United States, Bush was expected to keep the peace, not exacerbate violence and hatred against religious minorities. While there could be sharp disagreements over foreign policy, being commander-in-chief required at the very least an appearance of calm and sensible leadership, not hysterical and alienating rhetoric. It had nothing to do with “political correctness,” it was simply a matter of being presidential.

Today, top Republican presidential candidates no longer subscribe to this kind of leadership. Over the past 10 months, GOP candidates have often given the impression that they are running for fearmonger-in-chief, rather than commander-in-chief, where new rules of leadership apply. For these candidates, levelheaded discourse is considered a sign of weakness, and thinking before speaking is deemed phony and “politically correct.”

When our Democratic president avoids generalizations and confronts intolerance — as his Republican predecessor did — he is called “an apologist for radical Islamic terrorism” by one of the current frontrunners. When he does not become hysterical after a terrorist attack and rejects discriminatory and bellicose rhetoric, he is considered soft — or worse, his loyalties are questioned.

Of the three candidates left in the Republican primaries, the party’s two biggest demagogues — Sen. Ted Cruz (R-Tex.) and Donald Trump — have managed to stay on top by being about as unhinged and impulsive as General Ripper from "Dr. Strangelove." And while communists are no longer trying to impurify all of our precious bodily fluids, now Muslims are, according to one of Cruz’s foreign policy advisors, planning to implement Sharia law in America and destroy the West from within (starting with “America’s first Muslim president”).

Unsurprisingly, after the attacks in Brussels on Tuesday, Republican candidates did not disappoint Muslim-fearing Americans. This is “just the beginning,” warned a frantic Trump, while Cruz called for law enforcement to “patrol and secure Muslim neighborhoods before they become radicalized” (because everyone knows that treating an entire community like second-class citizens prevents radicalization). Trump also renewed his call for a “complete ban” on all Muslims entering the the United States and once again advocated torture, promising uneasy Americans that an attack would “happen in the United States” without his extreme and constitutionally dubious measures.

Like other terrorist attacks, Brussels was a gift to Trump, who understands just how effective fear can be in politics. Likewise, Trump’s Islamophobic response was a gift to ISIS recruiters, who understand how effective anti-Muslim rhetoric can be in radicalizing young Muslims. The extreme and careless rhetoric that has come from these leading Republicans, solely to scare voters into supporting them, is a brand of demagoguery that was once reserved for the fringe of the GOP. While the Republican Party has long been militant and imperialistic, the establishment had for decades managed to keep outright demagogues at bay. President Bush is a good example of this. The former president was belligerent and dishonest, and his foreign policies were immoral, but he was not a demagogue (although, as Matt Taibbi recently argued, his simpleton appeal paved the way for Trump).

As the quotes from above reveal, Bush did not shamelessly exploit the prejudices of the populace or scapegoat minorities. He condemned intolerance and rejected foolish generalizations. The same cannot be said for Trump, Cruz and the Republican Party at large, which has moved to the far right over the past decade. The “I don’t have time for political correctness” mantra has been routinely used to excuse inflammatory and provocative rhetoric. But this has nothing to do with political correctness. While there are legitimate arguments to be made against p.c. culture when it stifles debate (particularly in academia), this is simply about responsibility. Trump is a leading political figure, not someone’s drunk uncle or a trollish blogger.

Unfortunately, eight years of GOP obstructionism and hard-line rhetoric in Washington has paved the way for the likes of Trump and Cruz, and vulgar demagoguery is now a mainstay of modern Republican politics.