No photos, please! Families of my dying patients shy away from taking pictures in hospice, but why?

A dying person's bedside is a compelling gathering place for families. Taking photos needn't be disrespectful 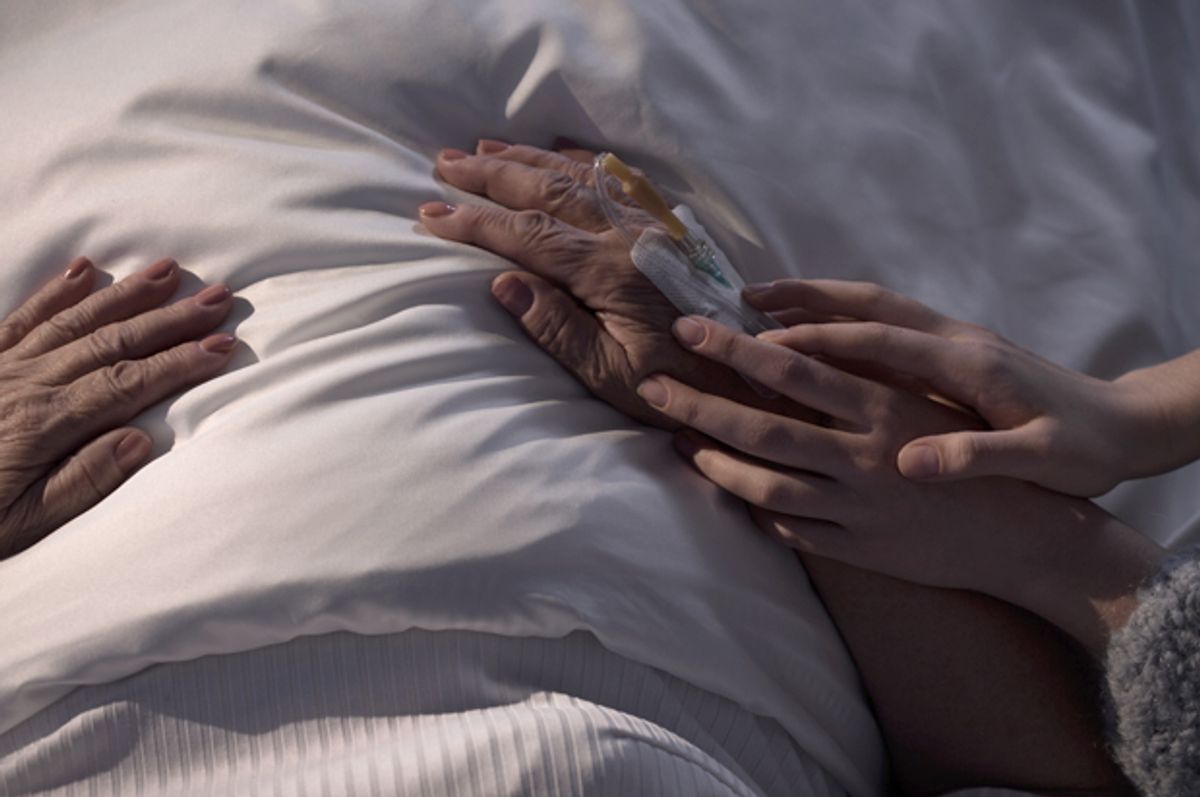 “How could you think about taking pictures at a time like this?”

A well-dressed man was admonishing his daughter not to take an iPhone picture of her grandmother. Chastened, his daughter put her iPhone away.

The two of them were at a hospice unit where I’m a physician, visiting Gillian, one of my patients. Their conversation is one that I hear surprisingly often. As my patients near the end of life, a sense of decorum seems to descend on everyone. Visiting family members talk in whispers, jokes disappear, and cellphones selfies are banished.

That loss of a photographic record is a shame. Families like Gillian’s are giving up a chance to record an event—and a person—they’ll all want to remember. In a digital age in which it’s normal to record every aspect of daily life, from a day at the beach to a particularly picturesque plate of oysters, it’s odd that the end of someone’s life should be off-limits to photography.

Unfortunately, I couldn’t ask Gillian if she agreed with me. She was sleeping comfortably, surrounded by a somber but friendly crowd of adult children and a smattering of nieces, nephews and grandchildren. But I bet she wouldn’t have minded a bit.

On a shelf along one side of the room were dozens of pictures of her extended family. Images from weddings and parties and vacations at the Jersey Shore were carefully arranged so that no picture crowded out its neighbor. Each one was turned toward the head of the bed so that Nana could see them easily from where she lay.

One photo in the front row displayed her at the top of the steps of the Philadelphia Art Museum, immortalized by Rocky’s famous training run. And like Rocky, Gillian had both hands raised in a triumphant gesture. Unlike Rocky, though, Nana was wearing a pink velour tracksuit with the words “Train like a beast.  Look like a beauty” embroidered in glittery thread across the front. And Gillian was grinning maniacally as if this adventure was entirely her idea.

This was apparently a family that documented events with the assiduity of photojournalists. Gillian didn’t seem to be shy about being recorded for posterity in moments that others would just as soon forget. So why the admonition to put the iPhone away now?

When I pressed him, her son couldn’t explain. “It doesn’t seem right,” he said.  “It’s not proper.”

In my work as a hospice physician, I often hear this admonition to put the camera or smartphone away. Or not to take it out in the first place.

It’s driven by a feeling that pictures of someone at this stage of life are …wrong, somehow.

I get that. It does seem wrong. Disrespectful, even.

But it’s not, if it’s done in the right way, in the right spirit, and for the right reasons. In fact, there are three good reasons why taking a few selfies at the bedside of a dying friend or family member is one of the best things you can do for them, and for yourself.

First, the pictures you take will help you remember the person you’re about to lose. Her smile. Her sense of humor. And, maybe, the way she was willing to pose for a picture despite the fact—or maybe because of the fact—that this would be one of the last images that you’d ever capture of her.

Second, those pictures will help you remember each other. The bedside of a dying person is one of the most compelling gathering places in a family, drawing people together from thousands of miles away. Those images will help you connect with each other, leaving a record of who was there, what you wore, and how you looked when you got off the plane from Albuquerque or Miami, or Hong Kong.

If you look disheveled, so what? Wear that look as a badge of honor. I can tell you that no family member visiting our hospice impressed us more than the son who took time off from training sled dogs in Alaska to be at his father’s bedside. He showed up in a stained parka, canvas pants and rough knee-high boots. I only wish that someone had snapped a photo of his appearance as he strode onto the unit with a backpack slung over one shoulder, looking like he’d mushed his way to Philadelphia from Fort Yukon.

Finally, I’d like to see more of these pictures because I think they would make death a little less frightening for my patients and their families. Visitors like Gillian’s family who come to our hospice unit often tell us how comfortable and home-like it is. And how glad they are to be there, and how they wished they had come sooner. I’m not sure what they expected, but they all seem surprised by what they find. I suppose that without any information at all, it’s easy to fear the worst. So a smattering of bedside hospice pictures on Facebook and Pinterest and Instagram would help to make death—and hospice—a little less scary.

Of course, I know that in our last weeks of life, none of us looks our best. But when do we ever? Besides, I doubt that Gillian would have minded a photo or two popping up on Facebook. If that Rocky pose didn’t bother her, then I’m pretty sure she would have welcomed a few pictures with her family.

Before I left the hospice unit that day, the cautious son stepped out to take a call. I snapped a quick picture of Gillian and her granddaughter, who perched on the bed next to her. That seemed to break the taboo, and other grandchildren and nieces and nephews crowded around her, each taking a turn.

Gillian died a few days later, but I’d like to think that those pictures are still out there somewhere. Maybe they continue to offer some comfort to her friends and family who were there.  And some connection for those who weren’t.

David Casarett, MD, MA, is a palliative care physician and health services researcher whose work focuses on improving systems of care for people with serious, life-threatening illnesses. He is also the author of three nonfiction books, the most recent of which was "Stoned: A Doctor's Case for Medical Marijuana," published in 2015 by Penguin Random House. His first novel, "The Ethical Chiang Mai Detective Agency," will be published in September 2016.

David Casarett M.D., the author of "Shocked" and "Stoned," is a physician, researcher and tenured professor at the University of Pennsylvania's Perelman School of Medicine.