There's no way out for Republicans: Paul Ryan's anti-Trump speech shows exactly why the GOP's future is so bleak

Ryan never mentioned Trump, but his target was obvious. Can he really endorse Trump after a speech like this? 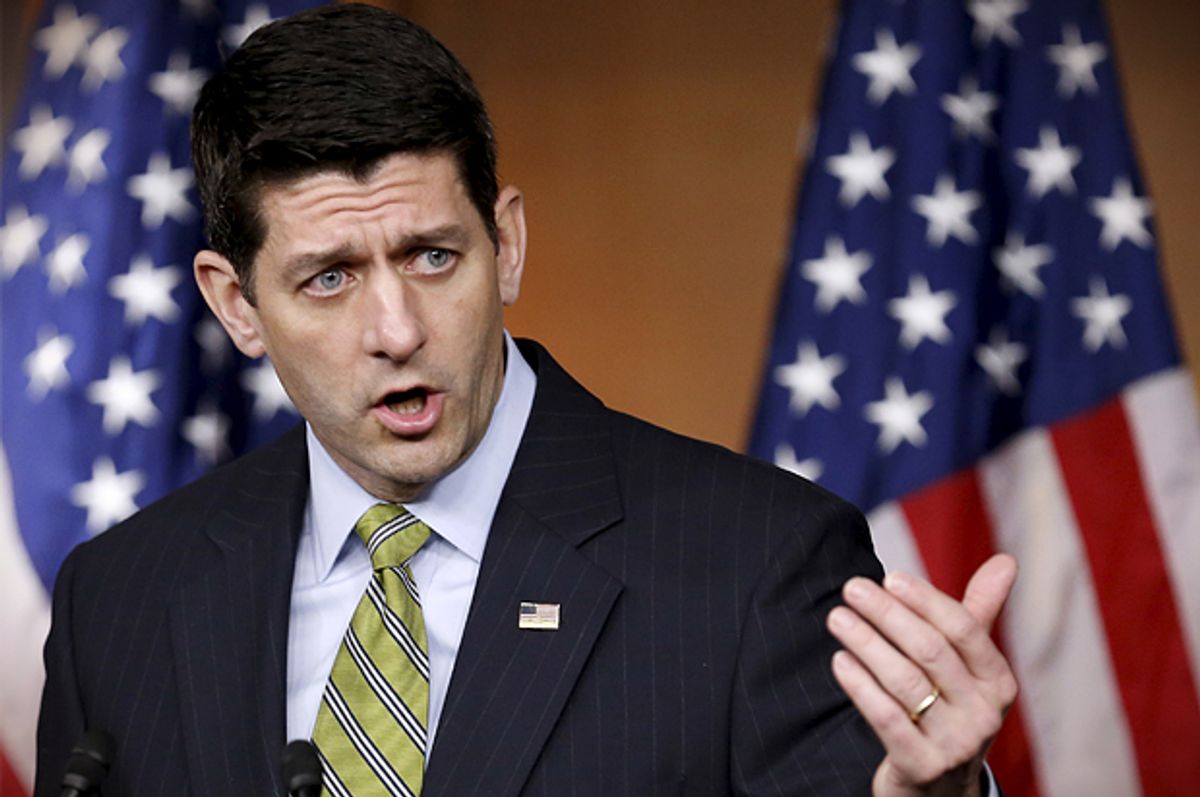 The general public was not his intended audience, so you probably missed this, but House Speaker Paul Ryan delivered a speech a few days ago that was a near-perfect encapsulation of why #NeverTrump Republican Party elites are seriously considering launching a third party.

And what the speech showed, basically, is that their motivations have less to do with Donald Trump and the GOP’s fate in the 2016 election than they let on. It isn’t about Trump and the present; it’s about the future and themselves.

Ryan delivered his speech in the House Ways and Means Committee’s hearing room, and his audience was “a couple hundred” interns on Capitol Hill. The theme of the speech, he said, was “the state of American politics.” That was only true in a technical sense; the real subject was Donald Trump. How can you be sure? Because, paradoxically, Ryan didn’t mention Trump’s name even once.

Here’s what he mentioned instead: A future, better America in which politics isn’t about “playing to [voters'] anxieties” but rather “appeal[ing] to your aspirations”; in which politicians “don’t resort to scaring you” and “don’t just oppose someone or something”; in which voters and politicians alike “don’t lock ourselves in an echo chamber” or “take comfort in the dogmas and opinions we already hold.”

An America, in other words, that would never cotton to the likes of Donald Trump.

But if that were the sum total of Ryan’s speech, it wouldn’t be noteworthy. You could easily boil all of the above down to a generic “Kumbaya” platitude. A fair number of those criticisms could indeed be leveled against “both sides.” In the end, it was when Ryan started talking not about Trump, but about himself — specifically, his previous “makers vs. takers” rhetoric — that things got interesting.

“I realized I was wrong,” Ryan said of his prior description of more than half of Americans as lazy freeloaders. “‘Takers’ wasn’t how to refer to a single mom stuck in a poverty trap, just trying to take care of her family,” he said. “Most people don't want to be dependent. And to label a whole group of Americans that way was wrong. I shouldn’t castigate a large group of Americans to make a point.”

This isn’t the first time the speaker of the House has tried to walk back the Randianism he unapologetically touted earlier in his career. But Ryan’s decision to weave his own story into what was essentially a speech about Donald Trump was telling. It signaled a desire to clearly establish that, party label aside, he is not on the same team as Donald Trump (or at least the real Trump, rather than some hypothetical toned-down version).

Here’s the thing, though: How can Ryan so clearly prep the ground for disowning Trump at the first opportunity and simultaneously plan on giving a pro-Trump speech during the GOP convention? Ryan is many things, but he’s not dumb. He surely knows that a Trump endorsement would haunt him for the rest of his career. Doing so would utterly nuke the “compassionate conservative” brand he’s been working on since 2013.

It’s just not realistic, in other words; at least not if Ryan envisions a post-Trump GOP. And that leaves Ryan, and GOPers like him, with little choice but to associate himself with a third party if Trump ultimately wins the party’s nomination. It’ll probably just be for 2016, and he’ll have to fend off (fair) accusations that he’s guaranteeing a Clinton victory. But unless he wants to own Trump forever, he has no other choice.