Donald Trump's reign of bullsh*t: He's not lying to us, he's just completely full of it 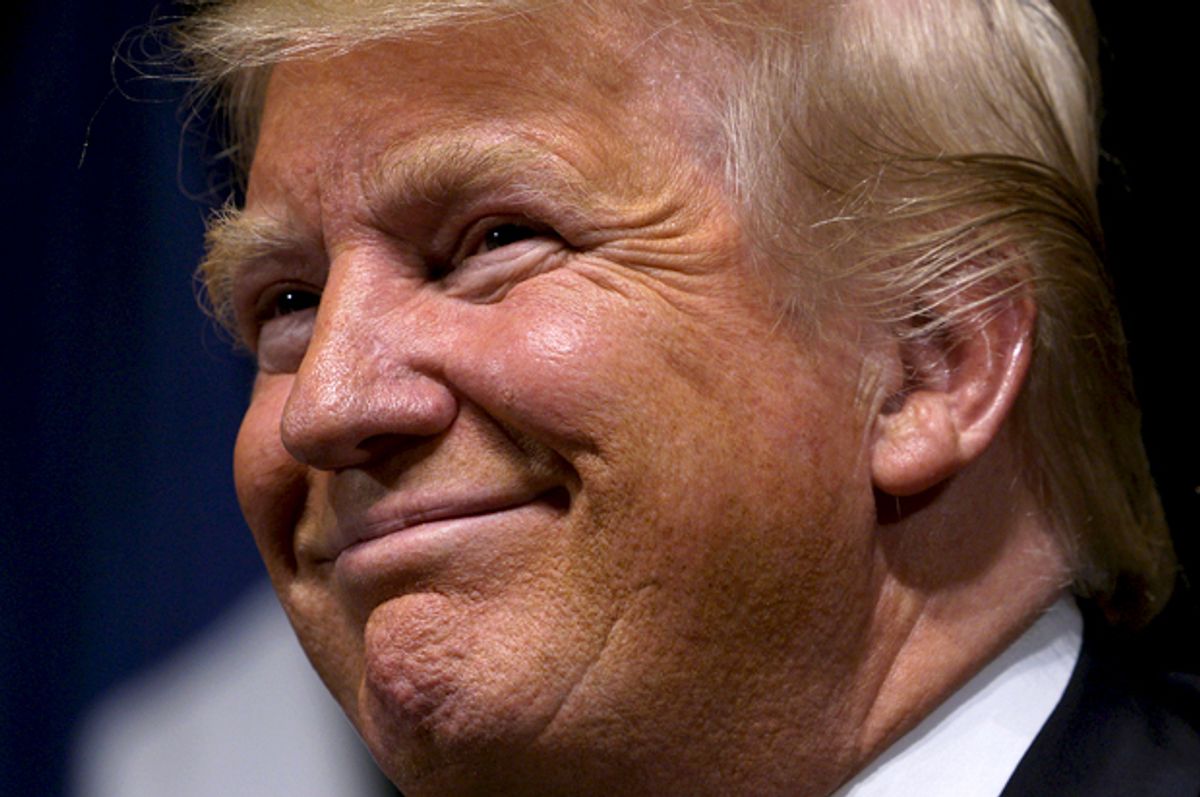 In his seminal essay "On Bullshit," philosopher Harry Frankfurt defines bullshit as a form of communication aimed to obscure the matter of facts being discussed by using the words that are neither necessarily true nor false. This definition hinges on a crucial distinction between a liar and a bullshitter. Unlike the liar, who hides things about himself in an attempt to lead us away from a correct apprehension of reality, the bullshitter hides that "the truth-values of his statements are of no central interest to him." In other words, bullshitter doesn’t care about what the truth is. He just talks as it suits his purposes.

It is hard not to notice the similarity between what Frankfurt describes in his essay and the current discourse of Donald Trump. As PolitiFact reports, most of Trump’s campaign statements have been blatantly false, mostly false or partially true. Only 2 percent of his statements are described as true. Although one is tempted to call him a liar, which many have done, he is not a liar but a bullshitter.

A liar, according to Frankfurt, must know what the truth is, and must deliberately aim to lead his listeners away from it. But, consider some of Trump’s recent false statements. A careful analysis of them will show that he did not need to know (and was most likely unaware of) what the real facts were. For example, when he said that American Muslims celebrated 9/11 by the thousands, he was not merely lying about this. He could not have known if there really were thousands of them cheering the fall of the Twin Towers. He probably conjured this statement from his supposition that since Islamic terrorists attacked the World Trade Center there must have been Muslim believers in America who have celebrated it.

Thus, there is no truth that Trump is aware of and that he tries to hide away from us. His political discourse is mainly based on constant reproduction of statements that attract media attention and keep him in the news cycle. Of course, he is not the first one to draw media attention through outrageous statements. Many have done that before him, and many will do it in the future. The role of media in contemporary politics lends itself easily to this kind of use.

But, the novelty of Trump is not only in the nonchalant disregard for the truth instead of its deliberate distortion, but also in the widespread acceptance of bullshit as the legitimate political discourse. By "legitimate" I do not mean that bullshit suddenly becomes the way politicians speak and justify their actions. What I mean is far more serious: bullshit is legitimate in politics when everyone starts accepting that words uttered in political discourse do not matter anymore.

Trump has successfully made language irrelevant, at least among his supporters (potentially half of the country). He indicated this himself when he said that his supporters are so passionate about him that even if we walked down Fifth Avenue and shot a person they would still love him. Although it did not sound like that, this was a statement about language, and not about Trump’s potential murderous actions. What he meant by this is that his supporters would love him no matter what he said. Hence, the bullshit.

Frankfurt concludes his essay by asking why there is so much bullshit nowadays. He gives two possible answers. First, he says that bullshit is "unavoidable whenever circumstances require someone to talk without knowing what is he talking about." Second, bullshit springs from various forms of contemporary skepticism "which deny that we have any reliable access to an objective reality and which therefore reject the possibility of knowing how things truly are."

The first answer could plausibly explain Trump. He has put himself into circumstances that oblige him to speak about things that are beyond his personal expertise. As we can witness from his media appearances, his knowledge about public policy, foreign affairs or broader culture is meager, to say the least, and he compensates by producing bullshit. The second answer is perhaps too “academic” for Trump and his supporters. It is not very likely that he or anybody close to him at this point engages in such epistemic or metaphysical exercises.

But, there is a third possible answer that could explain the current reign of bullshit in American politics, which can be discovered from Trump’s own words. Namely, when he said that his supporters are so passionate about him that they don’t care about what he does or says, he inadvertently discovered the roots of his appeal: bare instinct. It has become evident that his support among the populace springs from some primal domain that precedes language (thus making it irrelevant). In her recent interview with some of Trump’s young supporters, Samantha Bee has drawn out acknowledgment that Trump was appealing to them on a certain limbic level, speaking to their "lizard brains."

So, we could argue that Trump is bullshitting because language is irrelevant in explaining his political persona and his appeal to voters. What he hides is, therefore, not the mere irrelevance of truth, but more important, the crucial relevance of instinct for politics.

But, what is this "instinct" for? We may discover it by looking into what kind of resistance Trump has so far elicited. Besides the opposition of most liberal circles in the country, Trump has also met significant conservative resistance to his campaign for the Republican Party nomination. Almost the entire Republican establishment deeply dislikes Trump and would do anything it can to stop his victorious march to the Republican National Convention in July.

One might speculate about reasons behind this. Some conservatives argue that Trump is a covert metropolitan liberal from New York and point to his previous record supporting Democrats and standing behind liberal causes, such as abortion or a single-payer healthcare system. But, a more likely reason for the mainstream conservative opposition to Trump than this is the fact that he threatens to reveal the true face of American conservative politics. Namely, the bullshit he produces every day has only so much success in hiding what lies beneath: the deeply embedded instinct for racial and economic domination, white over black, rich over poor. This deep structure rises to the surface at every Trump rally, whenever a mass of his supporters gathers together. Hands raised to a Nazi salute, beatings of blacks, journalists and dissenters are the flip side of the bullshit rhetoric. Basically, Trump threatens to reveal something most conservative politicians are trying to hide: that American conservatism is not an ideology of limited government or public virtue, but as Corey Robin argues, a "mode of counterrevolutionary practice" to preserve hierarchy and power of white and rich elites over non-white and poor masses.

There are two basic ways we can deal with Trump and his bullshit. We could follow the example of Louis C.K. and plead to our fellow Americans with conservative sentiments not to vote for Trump. Alternatively, we could come to terms with Donald Trump as the true representative of a centuries-old tradition in American politics, which claims that only certain people are by nature (by the color of their skin or by the thickness of their wallet) fit to rule, while others should obey. We could accept him as such and finally deal with this tradition as responsible adults able to address our own imperfections.

Eldar Sarajlic is a political philosopher and an adjunct assistant professor at CUNY LaGuardia.