“Zootopia” in the Year of Trump: The parallels between a Disney cartoon and the 2016 election continue to surprise

In the wake of recent violence at Trump rallies, the film’s depiction of a divided country goes beyond child's play 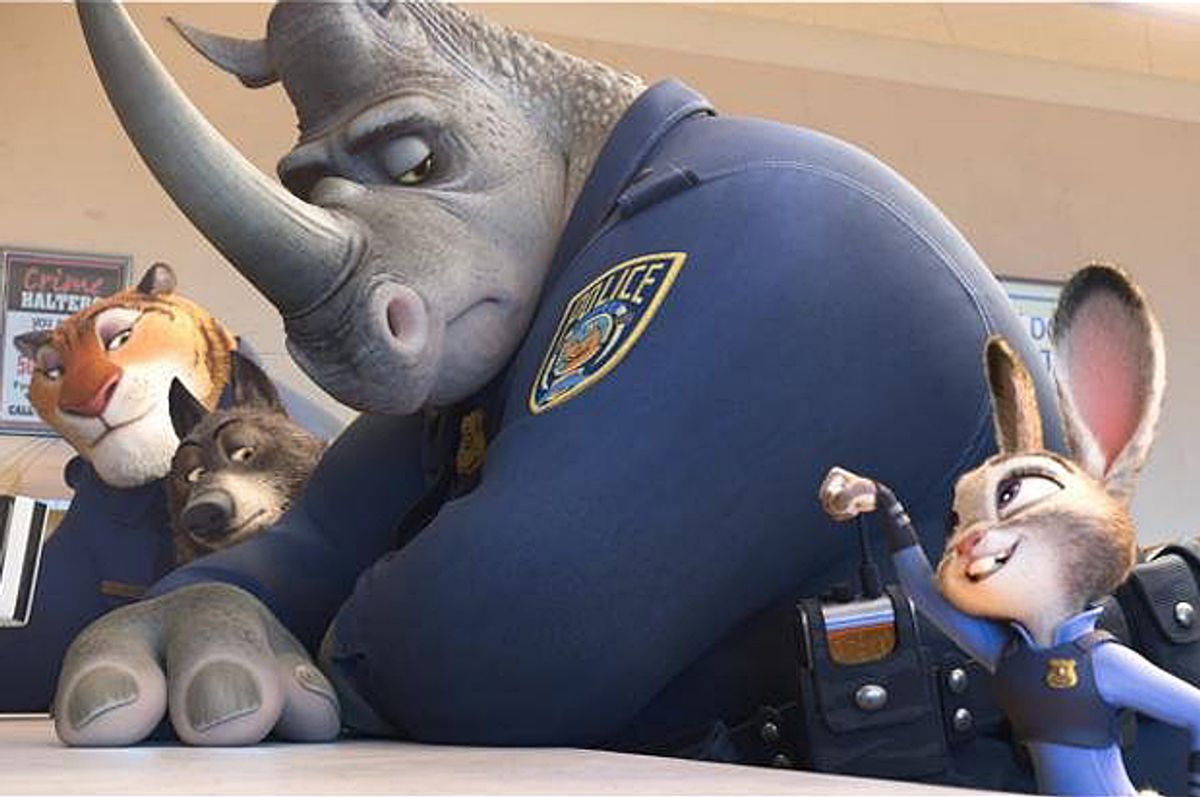 As Disney’s latest animated opus, “Zootopia” has not only toppled records with a $75 million opening weekend, but might very well beat “Frozen” as the most profitable cartoon to date.

Pegged 99 percent “fresh” by Rotten Tomatoes’ Tomatometer, the film has been roundly praised not only for its quippy script and solid storytelling, but for how aptly it captures early 2016 anxieties about race, police brutality, and the rise of political demagogues.

Chronicling the trials of the tenacious Judy Hopps (Ginnifer Goodwin), who chirpily sets off from Bunny Burrow to the big city to pursue her dreams of joining the police force under its new “Mammal Inclusion Initiative,” the film initially seems headed in Disney’s familiar “dream big” direction.

But after her first day on the job goes horribly awry, she and caddish fox Nick Wilde (Jason Bateman) form an unlikely gumshoe duo to investigate a case of a missing otter, exposing that certain Zootopians have mysteriously “gone savage,” devolving to a state of wildness believed by the city to be long left behind. What follows is a mix of caper, character study and inter-species melodrama, as presumptions about “predator” versus “prey” are tested, confirmed or daringly tossed aside.

Not everybody’s cheering—critics on both the left and the right point out problems in the movie’s sociopolitical ambitions. In one zinger of a critique for Consequence of Sound, Nico Lang claims that “Disney attempts to confront racism but instead delivers the kids’ version of ‘Crash,’” while Jason Johnson of The Root more forgivingly dubs it “‘The Wire’ with webbed feet.” Meanwhile, one conservative cleverly riffs that rather than a “milestone of dynamic storytelling,” the film is “a millstone around the neck of the establishment leftist social justice engineers,” denouncing the film as anti-white propaganda. “The Left has infected every facet of life,” says a young conservative in another review, “and they want to make sure we can’t go anywhere in this country without having the ‘white privilege’ hoax shoved in our faces.”

Such splintered reactions suggest the film has clearly hit a nerve, a nerve presumably dulled down in those critics beguiled by its feel-good ethos.

It is this same mainstream audience that has been bombarded by images of unrest across America that have monopolized the March news cycle. In the same two weeks of late-winter thaw during which “Zootopia” launched to the top, Donald Trump’s presidential campaign rallies prompted heated pushback in Fayetteville, St. Louis, Chicago and Tucson—with five deputies from North Carolina recently punished for neglecting to disrupt an assault on a black protester by a white Trump defender.

Days later, an African-American officer in Arizona calls Trump protesters “the most hateful, evil people I've ever seen,” fearing “a full-fledged riot” at the event he attended undercover to “see [the protesters’] point of view.” At that same rally last Saturday, a black supporter and U.S. airman sucker-punched and kicked a white protester, a startling volte-face from Fayetteville.

If these outbursts come across as convoluted spectacle, it’s because they are—eschewing the expected narratives for left/right, white/black, and everyone in between. Pandemonium rules and logic founders, predictable lines between victim and aggressor, predator and prey haphazardly erased. Suddenly a Disney film feels eerily on point, however muddled its rainbow rhetoric.

“Give me back the Zootopia I love,” pleads Gazelle, the pop star voiced by Shakira, leading a herd of picketers shaking signs against the injustice of species-centered profiling. In reply their mammalian rivals mount protests of their own, commanding all natural “predators” to “go back where you came from.”

Sound familiar? “If you’re an African first, go back to Africa!” taunted a livid Trumpist at a Black Lives Matter protester prior to the canceled Chicago rally. “Trump is a racist and so are his supporters!” cried Tucson activists last Saturday, chanting, “Shame on you!” in unison to those lining up to attend.

In a recent CBS/NYT poll, 85 percent of Democratic primary voters cast blame on Trump for doing little to keep the peace, while 80 percent of his supporters approve of how he’s responded to rally violence.

That said, it’s hard to believe that “go back” bombast and concomitant scuffles materialize from thin air; Trump has implored no small number of people to “go back” to some ostensibly native place—Latinos, Muslim immigrants, African-Americans, women, pretty much anyone invading his sensationalized kingdom (population one), a space no less fantastic, delusional or escapist than anything Disney could dream up.

Uncannily, the studio green-lit “Zootopia” back when Trump was best known for a Tower and a toupee. “We’ve been happy to find that both the humor and the meat of it are resonating,” director Rich Moore told the LA Times in early March, a massive understatement as domestic profits pass the $200 million mark less than three weeks from release. Are conservative viewers largely ignoring its heavy-pawed allegories, or could its broad appeal suggest a resistance across party lines to bigotry and hate?

The answer would seem a bit of both. In a trenchant piece for Politico, “Donald Trump Needs 7 of 10 White Guys,” David Bernstein calls attention to just how statistically unlikely a Trump presidency will be, no matter his lead in the primaries. “[T]he argument often made by Trump’s followers is that he will win in November because he will bring so many disengaged Americans to the polls. But they’re talking about disengaged white voters, mostly men—and unfortunately for him, the turnout rate for white men is already relatively high.” In essence, if any new voters turn up in November, they are much more likely to be female, Hispanic or black, and “given his flirtations with racism and fascism, he’s likely done too much damage to salvage much crossover appeal.”

No matter what disconcerting percentage of current Trump supporters are white men shouting epithets, the fact is that this group simply lacks the numbers to sway things their way, even if white males at large were mostly pro-Trump (and there is nothing to prove that they are). “Between Reagan and Romney, the white male share of the total vote had dropped from 45 percent to 35 percent,” Bernstein explains.

And among right-leaning critiques of “Zootopia”—which are predominantly authored by white men (even more so than movie reviews in general)—no amount of ire has so far triggered any serious boycott. Policeone.com has even lauded the film for its “refreshingly positive” portrayal of cops, unusual for Hollywood. Like Obama himself insisting that “cops deserve our respect,” while tacitly, if belatedly, approving #blacklivesmatter from afar, “Zootopia” never presents a world so smugly harmonious that police aren’t called for to fix things up. Which is why critiques of being overly p.c. feel downright ludicrous; the heroine is an officer, after all, and her caddish partner in crime (and punishment) ultimately joins the “good guys” as an officer himself after a life of petty theft and roguery.

Indeed, Chief Bogo (voiced by Idris Elba), a cape buffalo in no mood for bull, is also the outlet for some of the film’s most sagacious lines, as when he throws the falsity of the Disney premise into vivid relief: “Life isn't some cartoon musical where you sing a little song and all your insipid dreams magically come true. So let it go.”

Topped off by the “Frozen” reference at the end, the film’s self-awareness as a cartoon musical and political film challenges any who seek to see it as simply either/or. Ultimately, the finale sends us off with a silly little song, performed by Gazelle (proving her hips don’t lie even when swinging from a lithe antelope) circled by a quartet of Vogueing tigers in leather chaps.

“They have to figure out how to coexist,” says Byron Howard, a director of the film, commenting on the conflict at the film’s crux. Let’s see if we can do the same within our own riven species.