Dear members of the media, do your job already: Trump isn't a Teflon candidate, the press must expose his lies and nonsense 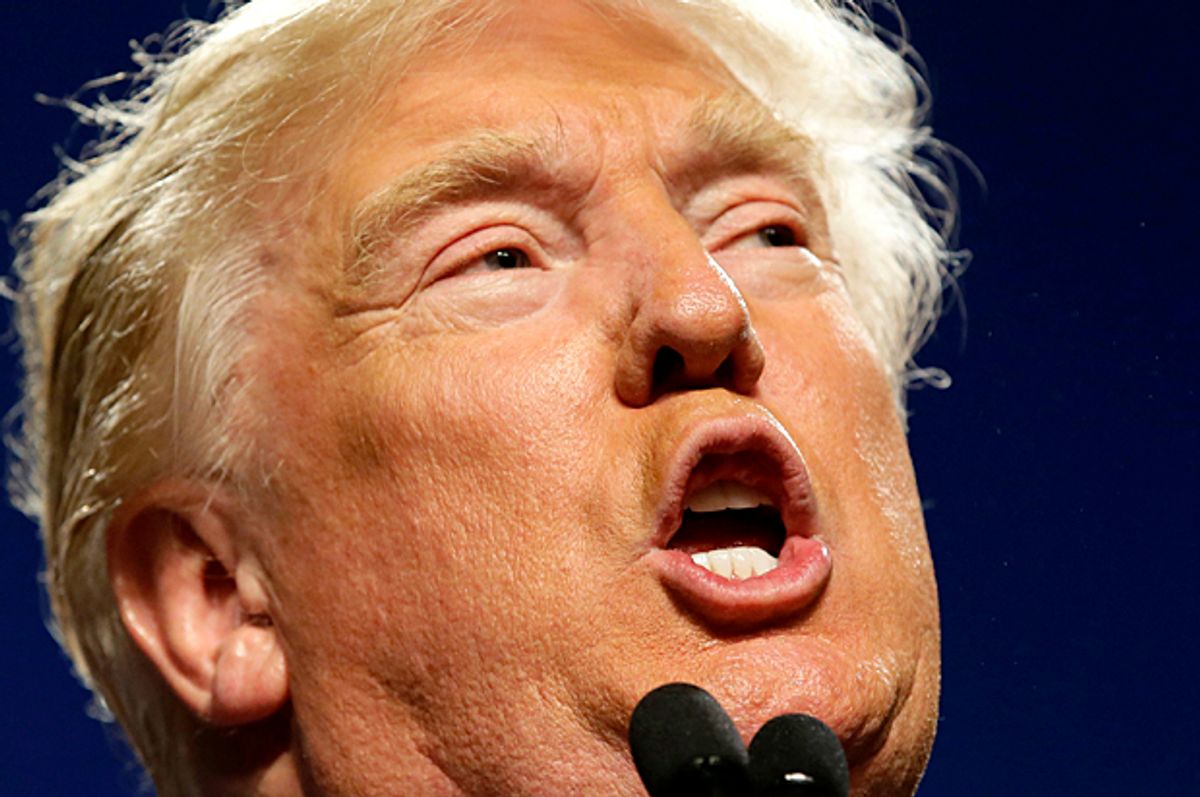 The notion that Donald Trump is bulletproof, that no story about him could ever be so terrible as to impact his popularity with the Republican base, has sadly become a self-fulfilling prophecy with the media. Nowhere is this more obvious than with the story that dominated the political headlines all last week and probably will this week, even after the terrorist attacks in Belgium and Pakistan: Trump's claim that his primary opponent, Ted Cruz, has some dark secret lurking in his marriage.

Trump's stunt exposed some major vulnerabilities in the candidate: His misogyny, his hypocrisy, his utter shamelessness as a liar, his narcissism, and his lack of basic knowledge about politics. But, with perhaps the exception of the misogyny angle, by and large the media didn't pursue this story, instead simply publishing "accusations were made" stories and leaving it at that.

This isn't because, as some more cynical folks like to insinuate, that the media is carrying water for Trump. Most journalists are full well aware that a Trump presidency would be the ruin of this country, and, if anything, certain norms of "objectivity" have been thrown out in favor of openly criticizing him more than other candidates. And while the Trump candidacy is good for clicks, but that would be doubly true if he finally started flaming out.

No, I think the reason that the media dropped the ball on this one is learned helplessness. Trump's "bulletproof" reputation has cowed much of the media into thinking it's useless dig up dirt on Trump or challenge his blatant lies, so they don't even bother. But just because Trump's supporters have an uncanny ability to rationalize anything away doesn't mean that it's useless to hold Trump up to real scrutiny. Most of the country doesn't like Trump and the more information that is out there, exposing him as the monster he is, the more he will be resisted, both by Republican leaders and by the public at large in November. So while it might feel disconcerting now to go after Trump only to see him continue to (barely) win primaries, it is still worth it.

There were three major major opportunities the media missed when covering this story, angles that are unlikely to pry Trump fans off their idol but are still necessary for the larger public to understand.

1) Not challenging Trump's insinuations on Heidi Cruz. Trump's strategy of running around claiming there is some dark secret Heidi Cruz has, but refusing to say what it is, is hilariously transparent. It's clear he's got nothing and is trying to get journalists to do his work for him, by going digging. For reasons that make no sense whatsoever, it's working. Multiple news outlets have assumed that it must be her mental health history, which is not a dark secret at all, and others have started to dig deeper, turning up nothing, probably because there is nothing. But what is going largely un-investigated is the much more likely possibility that Trump is just making stuff up.

And finding out if he's just making stuff up is not that hard to do, using the oldest trick in the journalism book: Ask him. It can't hurt to try! Sure, it's a near-certainty that he will lie if asked, but he might slip up while lying in a way that exposes what a liar he is. Calling his bluff to his face is likely to produce something newsworthy.

For some reason, however, reporters are afraid to confront Trump on this. Trump handed Jonathan Karl of ABC News a perfect opportunity on this front, and Karl simply didn't take it.

"There are things about Heidi that I don't want to talk about," Trump darkly insinuated.

At this point, Karl should have insisted that Trump stop insinuating. Bluntly tell Trump that his refusal to say shows that he has nothing. Don't let him squirm away: Details or it didn't happen.

2) Not using this as an opportunity to recount Trump's own history of adultery. Trump denies playing the Cruz adultery story in the National Enquirer, but it's clear that he wants it to be the focus of conversation. But there's no reason to let him set the terms! Every time Trump plays the "they were right about John Edwards and O.J. Simpson" card, this is a golden opportunity to ask him about his not-even-remotely secret history of adultery.

"You have a tabloid history of your own," you can start. Then ask him about the time he subjected Ivana Trump to a major public humiliation when his mistress, Marla Maples, confronted her in Aspen. Note that he recounts the story as if it's a big joke and ask him if he thinks it's funny to humiliate one's wife this way. That should be fun.

Every single story about Cruz's alleged adulteries needs to be accompanied with a reminder that Trump's adultery is not alleged at all. This is also important to keep in mind when Trump inevitably goes after Bill Clinton for committing adultery.

3) Not confronting Trump's nonsense about super PACs. Trump's justification for dragging this race even further into the gutter is that Cruz started it. Now, Ted Cruz is a miserable human being who has no business running a shoe store, much less a country, but he almost certainly did not start this. Trump is arguing that a Facebook meme started by a super PAC is Cruz's fault, that his campaign is quite literally using this super PAC as a front, in clear violation of campaign finance laws.

The problem with this accusation is it's nonsense. It's highly unlikely that the Cruz campaign had anything to do with this meme.

Trump is riffing off a widespread belief that all Super PACs are simply campaign fronts and that everyone is violating the law all the time by coordinating with them. There might be a few major ones that are, in fact, coordinating illegally with campaigns, but the unsexy truth is that most of the hundreds, if not thousands, of Super PACs out there were created by people with their own agendas who really aren't working with the official campaigns.

In fact, Cruz in particular has a well-documented problem with super PACs that fundraise in his name but then don't actually do anything to help his campaign.  They really are independently run groups who are doing their own thing without direction from campaigns in many to most circumstances.

But journalists aren't confronting Trump with these facts when he floats the almost certainly false accusation that Cruz is behind all this. Since he's accusing Cruz of a crime, he really should be asked to provide evidence. By not confronting Trump, the media is allowing him to really cement the almost surely false assumption that "both sides" in this particular fight are playing dirty. Cruz is a terrible person in most regards, but on this front, he's almost certainly innocent.

It's frustrating watching Trump keep pulling obnoxious stunts without losing any of his supporters, and it's easy to see why journalists are tempted to give up rather than hold his feet to the fire. But Trump is not actually bulletproof. Outside of his base of loyal supporters, Trump is wildly unpopular and getting more unpopular all the time. Negative coverage does not, in fact, just bounce off him. The public is paying attention, and there is no reason to think they will ignore it if Trump continues to get coverage exposing him as a fabulist and a bully.