Stop trying to make Bernie disappear: While the establishment pretends nothing has changed, Sanders continues to win big

Winning the nomination could be challenging at this point, but Sanders's ideas have staying power even beyond 2016 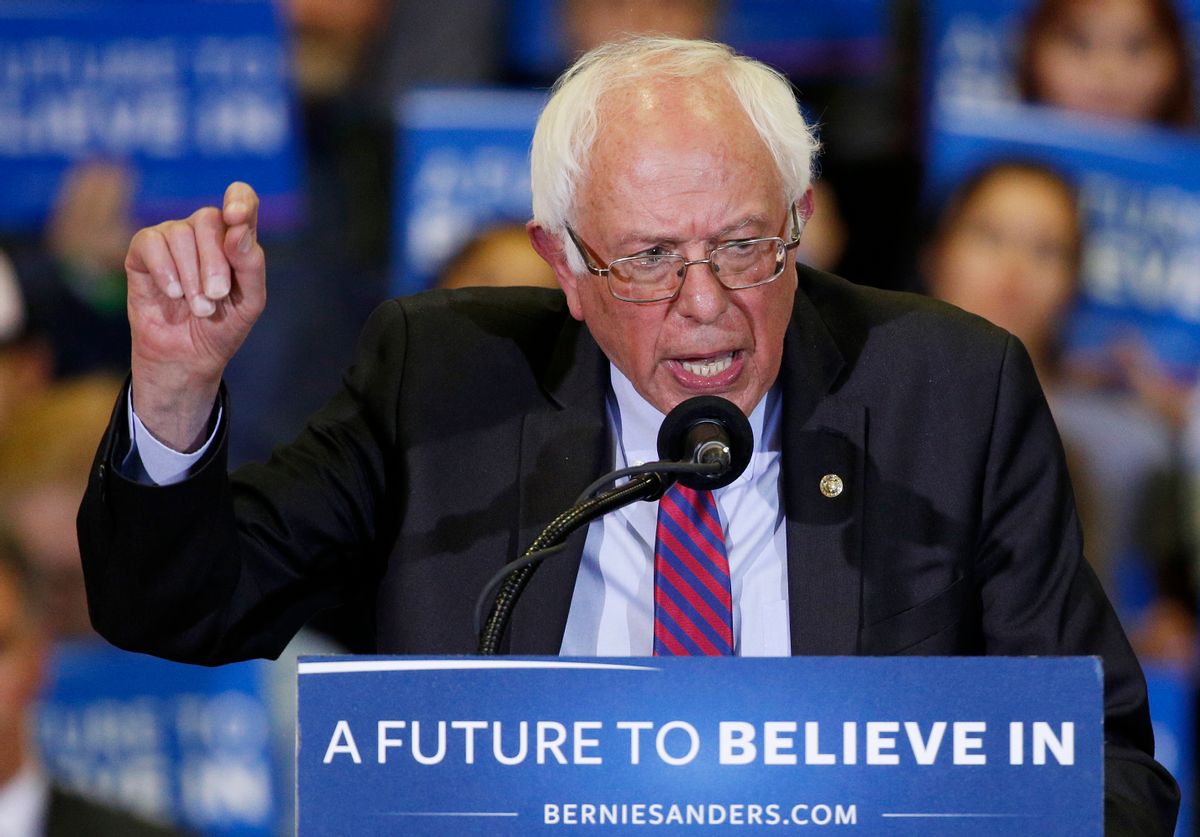 A specter appears to be haunting American liberalism — the specter of democratic socialism. As Senator Bernie Sanders (I-VT) continues to pick up surprising victories across the country, decisively winning Washington state, Alaska, and Hawaii over the weekend, it is becoming clear that his brand of democratic socialism (what some might simply call social democracy) is not a passing fad, but the future of Democratic party politics. While he may not win the 2016 nomination, he is winning the hearts and minds of Democratic voters and Independents. And with his growing popularity, particularly among millennial voters, it has not been surprising to see some liberals dusting off red-scare tactics from the ash heap of history.

In January, for example, Clinton allies prepared a dossier to paint Sanders as a Soviet-sympathizing communist, while her surrogates have been vocal about his “radical” left-wing politics. “[Republicans] can’t wait to run an ad with a hammer and sickle,” said Missouri Senator and Clinton supporter Claire McCaskill, while Clinton surrogate and former Republican attack dog David Brock spoke plainly: “He’s a socialist... He’s got a 30 year history of affiliation with a lot of whack-doodle ideas and parties.”

With this red scare in the air, it was only a matter of time until a leading liberal decided to remind everyone that “socialism” and “Marxism” have produced some of the most brutal and repressive dictatorships in the world. And last week, as President Obama was making the rounds in Cuba, New York magazine columnist Jonathan Chait did just that in his article, “Reminder: Liberalism Is Working, and Marxism Has Always Failed,” in which he opines that liberalism “has never been stronger than now.” Considering that economic inequality is at 80-year highs, Washington is controlled by monied interests, union membership is at historic lows, and American healthcare, though the most expensive in the world, is ranked at the bottom of the developed world, it’s an interesting time to be so optimistic about New Democrat liberalism.

But alas, surely it’s better than Marxism, which Chait defines as a “theory of class justice” that only respects the political rights “exercised by members of the oppressed class” (in other words, a brand of left-wing authoritarianism). This narrow and erroneous definition explains why half of his unfocused screed is dedicated to the “political correctness” movement in academia, which does indeed have authoritarian tendencies, but has nothing to do with Marxism, which is essentially a method of socioeconomic analysis.

Reading his piece, one could easily get the impression that all Marxists and socialists were on board with the Bolsheviks and the Soviet Union; that is to say, all Marxists (and socialists) are inherently authoritarian and anti-democratic. This is about as absurd as calling President Obama a communist.

Of course, there can be no denying that the states that identified themselves communist were repressive authoritarian regimes where civil rights and liberties were almost nonexistent. But Marxism as school of thought has a wide variety of theorists and adherents, both democratic and anti-democratic, revolutionary and reformist. (Marx himself offered very little advice in how to achieve socialism, and dedicated most of his energy to the study of capitalism.) Consider Karl Kautsky, a friend of both Marx and Friedrich Engels and a prominent Marxist theorist of his day, who vehemently opposed the Bolsheviks and their authoritarian politics. In his work, "Social Democracy versus Communism," Kautsky explains what Marx did and did not intend with his work:

“There was nothing that Marx feared so much as the degeneration of his school into a rigid sect... To Marx there was no ultimate knowledge, only an infinite process of learning. Therefore, his own theory is not to be conceived as a collection of tenets which we must accept on faith. Marxism itself is nothing but a definite process of learning; founded upon a definite method introduced by Marx and Engels. This method itself, which Marx and Engels called the materialist conception of history, is not unalterable... Every form of doctrinaire fanaticism, every attempt to turn Marxism into an unalterable dogma is contrary to Marxist thought, which recognizes no absolute truth but only relative truth.”

Relative to modern global capitalism, Marx’s three-volume critique of capitalism, "Das Kapital," remains highly relevant and insightful. The past 40 years have proven how resilient and revolutionary capital is, undermining the welfare states and worker movements that developed over the 20th century. (Marx, who wrote extensively about capital’s revolutionary nature, perhaps underestimated just how revolutionary it could be.) With the financial crash of 2008-09 and ever-increasing economic inequality in the United States and around the world, is it any wonder Marx’s work has become pertinent again? The New Yorker's John Cassidy summed up Marx’s importance in his 1997 essay, "The Return of Karl Marx":

“[Marx’s] books will be worth reading as long as capitalism endures.”

In his New York essay, Chait concludes that Marxism, or socialism, “has failed everywhere it has been tried,” by which he means authoritarian communism has failed — essentially omitting all anti-authoritarian socialists and socialist parties from history.

However, as another article from last week, "Is Socialism Undemocratic?," written by Joseph M. Schwartz and published in Jacobin — a publication that Chait directed much of his invective at — points out, socialists were “consistent opponents of authoritarianism of both left and right varieties” throughout the 20th century.

“Despite the common assertion that ‘capitalism equals democracy,’” writes Schwartz, “capitalists themselves, absent the pressure from an organized working class, have never supported democratic reforms... For many socialists, the support for democratic reforms was unconditional; but they also believed that the class power needed to restrain the power of capital had to be furthered so that working people could fully control their social and economic destiny. While criticizing capitalism as antidemocratic, democratic socialists consistently opposed authoritarian governments that claimed to be socialist.”

Social reforms enacted throughout the 20th century in “liberal” states would have never come about without strong popular movements, made up largely of socialists and Marxists. Indeed, one simply has to go through the list of major political parties in Europe — the UK Labour Party, the Social Democratic Party of Sweden, the Social Democratic Party of Germany, the French Socialist Party, the Labour Party of Norway — all of which are rooted in socialist/Marxian politics, to see how important socialist movements were in forming modern Social democracies. The United States is unique in not having a major socialist party, although the reforms enacted by New Deal Democrats would have been unlikely without radical pressure from below.

Many of these parties discarded their left-wing politics as the 20th century advanced, moving towards a neoliberal “third way,” and, as mentioned above, global capital has proven impressively resilient. Though certain socialist institutions remain strong in many of these countries (consider the UK’s National Health Service, which was implemented by the democratic socialist Minister of Health Aneurin Bevan of the Labour Party), reactionary politics, exemplified by Reaganism and Thatcherism, but also the third way capitulation represented by Blair and Clinton, have done great harm to working class and egalitarian movements.

In the United States, labor unions and the middle class have been in terminal decline for the past four decades, while corporations have become transnational behemoths whose executives make hundreds of times more than their average workers. In Washington, monied interests have seized more influence on policy than ever before, and legislation is virtually impossible without major concessions to corporate powers. And as the French economist Thomas Piketty documents in his book "Capital In The Twenty-First Century" (a title that clearly alludes to Marx’s masterwork), income and wealth inequality have returned to pre-Great Depression levels, and there is no reason to think this will change without radical solutions.

The revival of left-wing politics in America and around the world is not random. Sanders has succeeded because of his economic progressivism, not in spite of it. Towards the end of the 20th century, the liberal establishment abandoned many of the egalitarian ideals that FDR laid out in his Second Bill of Rights, and the inequities of modern America are to some extent a product of this abandonment. Consequently, the resurgence of leftism is a product of these inequities. For millions of people, modern liberalism has failed. What better time to get a little radical?