The truth about Donald Trump's angry white men: Inside the media narrative that the media doesn't understand

Members of the establishment press wonder how they got Trump so wrong. Here's one big way 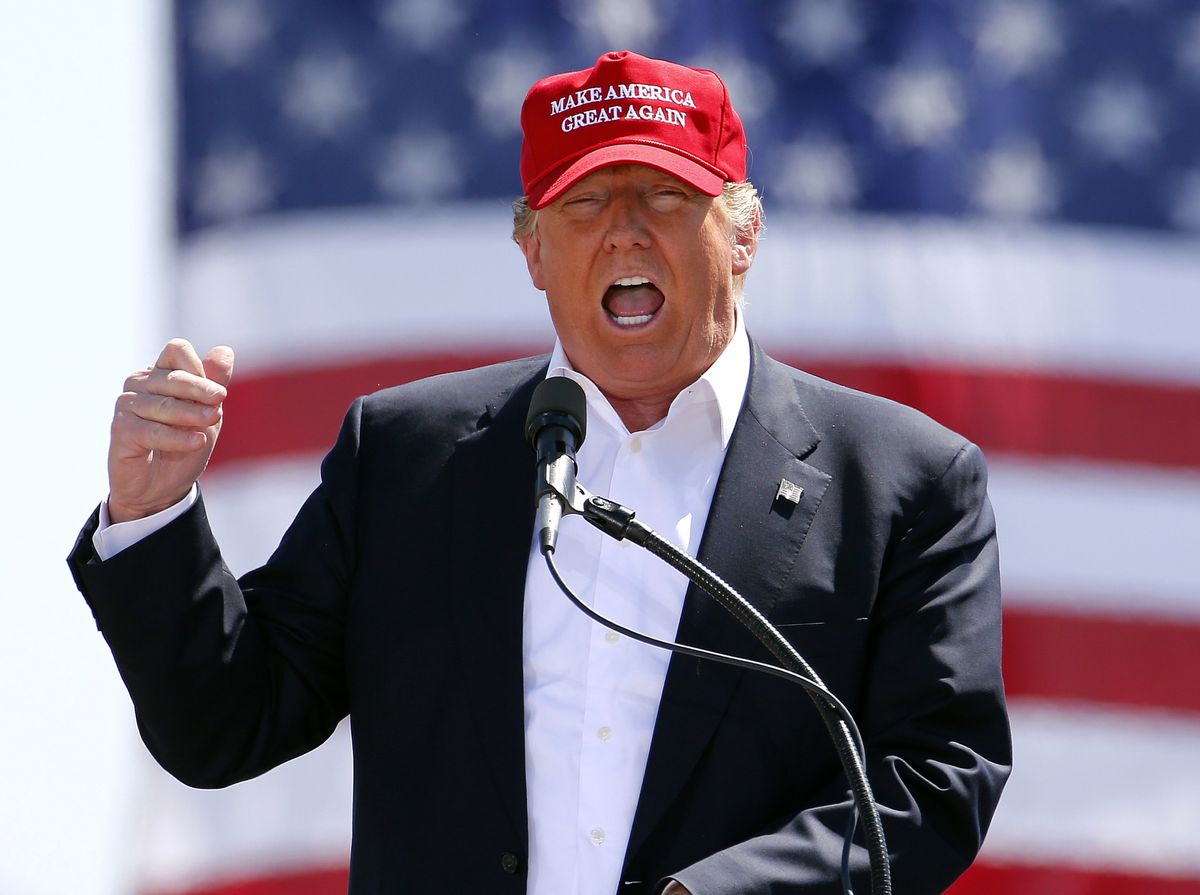 The press is doing a whole lot of navel gazing at the moment, wondering how they went so wrong about Donald Trump's appeal. Apparently, they all thought it was joke until this weekend or something. And the big takeaway is best exemplified by this observation by Nicholos Kristof in the New York Times:

Media elites rightly talk about our insufficient racial, ethnic and gender diversity, but we also lack economic diversity. We inhabit a middle-class world and don't adequately cover the part of America that is struggling and seething. We spend too much time talking to Senators, not enough to the jobless.

It mystifying why Kristof thinks media elites inhabit a "middle class" world, but that's beside the point. It's the rest that's truly laughable.

Evidently, Kristof believes that if you're talking about racial, ethnic and gender diversity you aren't talking about the jobless or the part of America that is struggling. Basically, he's saying the media's ignoring white men. Again.

This conversation has been going on since the 1960s. Here's the Kristof of his day, Joseph Kraft, wringing his hands over the media elite failing to properly take into consideration the needs and concerns of "average Americans" back in 1968 after the violence at the Democratic convention:

"Are we merely neutral observers, seekers after truth in the public interest? Or do we, as the supporters of Mayor Daley and his Chicago police have charged, have a prejudice of our own?

"The answer, I think is that Mayor Daley and his supporters have a point. Most of us in what is called the communications field are not rooted in the great mass of ordinary Americans--in Middle America. And the results show up not merely in occasional episodes such as the Chicago violence but more importantly in the systematic bias toward young people, minority groups, and the of presidential candidates who appeal to them.

"To get a feel of this bias it is first necessary to understand the antagonism that divides the middle class of this country. On the one hand there are highly educated upper-income whites sure of and brimming with ideas for doing things differently. On the other hand, there is Middle America, the large majority of low-income whites, traditional in their values and on the defensive against innovation.

"The most important organs of and television are, beyond much doubt, dominated by the outlook of the upper-income whites.

"In these circumstances, it seems to me that those of us in the media need to make a special effort to understand Middle America. Equally it seems wise to exercise a certain caution, a prudent restraint, in pressing a claim for a plenary indulgence to be in all places at all times the agent of the sovereign public."

This began the decades-long self-flagellation by the media (and the cynical exploitation of it by the Republicans) wherein it was assumed that the most misunderstood and underserved people in the whole country were salt-of-the-earth white folks nobody ever thinks about. Except that it's anything but the truth. Every single election cycle since 1968 the press has been obsessed with this mythical Real American who is always angry, always frustrated, always railing against the so-called elites because they allegedly only care about the racial minorities or the women or somebody other than them. Then we end up with a mass soul search in which we all come to understand that the key to the election is to address these people's grievances.

In those early days it was referred to as "The Silent Majority" of Richard Nixon, which Donald Trump has unoriginally revived. Since then, pollsters have come up with slogans to target certain demographics (NASCAR Dads and Waitress Moms are two examples), which the press then uses as symbols of this Real America, representing the breathing heart and soul of the country.

1976 featured media obsessing over the everyman outsider Jimmy Carter, a born-again Christian from the South who spoke to Real Americans who just wanted a president who wouldn't lie to them. It wasn't long before they discovered that he didn't really fit the bill. The Real Americans, it turned out, were more conservative than Carter and really wanted the Gipper to Make America Great Again. And thus the most Real Americans in the whole country were discovered: the Reagan Democrat:

The work of Democratic pollster Stan Greenberg is a classic study of Reagan Democrats. Greenberg analyzed white ethnic voters (largely unionized auto workers) in Macomb County, Michigan, just north of Detroit. The county voted 63 percent for John F. Kennedy in 1960, but 66 percent for Reagan in 1980. He concluded that "Reagan Democrats" no longer saw the Democratic party as champions of their working class aspirations, but instead saw them as working primarily for the benefit of others: the very poor, feminists, the unemployed, African Americans, Latinos, and other groups. In addition, Reagan Democrats enjoyed gains during the period of economic prosperity that coincided with the Reagan administration following the "malaise" of the Carter administration. They also supported Reagan's strong stance on national security and opposed the 1980s Democratic Party on such issues as pornography, crime, and high taxes.

These are people we now refer to as "Republicans" but the myth of these alleged swing voters has persisted even to this day, as reporters commonly wonder if Trump is going to be able to nab those Reagan Democrats, who no longer exist. (Even pollster Stan Greenberg, who followed Macomb County in Michigan for decades, gave up the ghost on that project after 2008, when Barack Obama won there. It turns out that all the Real Americans there had either moved or stopped being Real.)

During the '80s, the ecstatic canonization of these voters was overwhelming with political reporters rushing to their enclaves in various parts of the heartland like anthropologists in search of lost tribes of the Amazon. They would sit down in diners and cafes and listen raptly to white men in cat hats talk about how the country is going to hell in a handbasket because we can't afford to keep giving handouts to foreigners and people who won't work. Sound familiar?

About the same time, the Democratic Party began their quest to once more bag their great white whale -- the Southern white male; they recruited their presidential candidates among the ranks of the white Southerners of the New South and crafted their message to appeal to him. And once again, the press "discovered" that this demographic was deeply in need of more coverage so the country could understand their plight.

In 1994, the term "Angry White men" was found to have been used more than 1,500 times in the run-up to Newt Gingrich's mid-term sweep of the House. On the day after the election, USA Today ran a famous story by Patricia Edmonds and Richard Benedetto called "Angry White Men; Their Votes Turn the Tide for GOP; 'Men Want to Torch' Washington." Sound familiar?

By 2004 the press once again donned the proverbial hair shirt and castigated itself for failing to properly cover the Real Americans.  The New York Times even began a "conservative beat," presumably so they could understand the message underlying songs like "The Angry American" which had been the perfect expression of angry white men who wanted revenge after 9/11.

Now we are witnessing yet another iteration of the phenomenon with the Trump voter of 2016, a very, very angry white guy everyone supposedly ignored for years. But the truth is that whether they are Reagan Democrats or Reagan Republicans or Heartland voters or Southern white males, these citizens' needs and desires are always at the forefront of media attention in virtually every election. And their concerns are always the same: They believe they are personally getting screwed because immigrants and welfare queens and gays and feminists and foreigners are all taking what they aren't entitled to and America is weaker and less significant because of it.

This has been going on for almost 50 years. It's been the backbone of conservative resentment and the Republican Party has exploited it every step of the way.  The press has been covering it for that long as well, over and over again putting these same people at the center of our elections as if they are the most important voters in the country, who have suffered a tremendous indignity by having to put up with the likes of immigrants and African Americans and women getting any attention at all. That's certainly how these so-called Real Americans feel about it. But there's no reason for the press to keep buying into it.