Will the vicious bombings at the Lahore park and Baghdad soccer stadium get the same international solidarity? 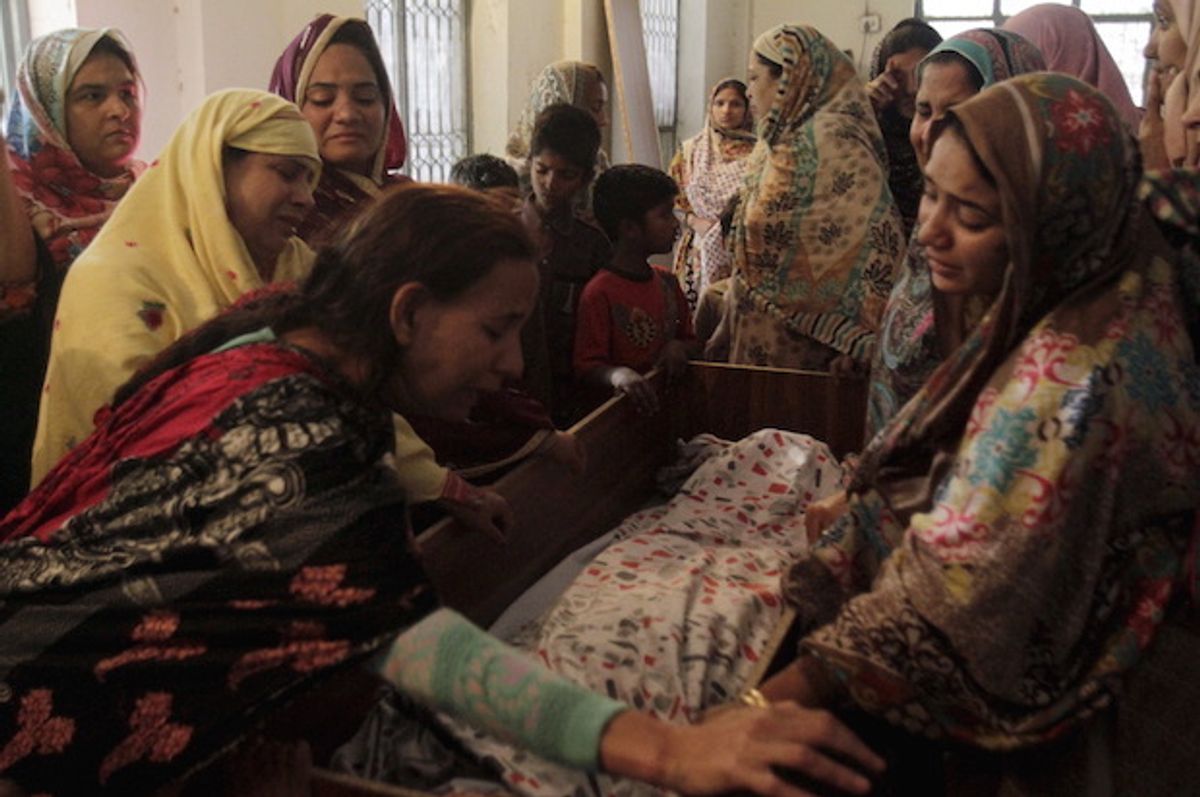 Family members mourn the death of a relative who was killed in a March 27 ISIS-linked attack at a public park in Lahore, Pakistan, on March 28, 2016 (Reuters/Mohsin Raza)
--

There have been two more Brussels since Brussels.

ISIS-linked groups killed more than 110 people and injured at least 400 others in two large-scale bombings in a period of just five days after the March 22 Brussels attacks, which left 35 people dead and injured more than 300.

On Easter Sunday, the Jamaat ur-Ahrar faction of the Pakistani Taliban, which has previously declared loyalty to ISIS, bombed a busy public park in the city Lahore, killing more than 70 people, including roughly 30 children, and injuring at least 300. The extremist group openly said it was targeting Pakistan's Christian minority community.

Mere days after the Brussels attacks, on March 25, ISIS massacred 41 people and injured more than 100 at a soccer stadium near Iraq's capital Baghdad. A suicide bomber blew himself up as local officials, including a mayor, were handing out trophies to athletes.

This has not stopped the tragedy in Brussels from being weaponized by the far-right, however — with the inadvertent help of much of the international community and Western media punditry, which have a long-established habit of mourning European victims exponentially more loudly.

A memorial gathering for the victims in Brussels on Sunday featured Nazi salutes and anti-immigrant slogans — a chilling sign of the dangerous consequences of the double standards in reaction to such attacks.

Salon detailed these double standards on Brussels, reflections of an underlying moral and political hypocrisy that is even more insidious when one considers it in juxtaposition with the scarcely acknowledged victims of Western-backed atrocities, such as the almost 120 Yemenis slaughtered by the Saudi-led coalition at a market in Hajjah exactly one week before; or the more than 6,000 people, half civilians, who have been killed in the little-reported year-long Western-backed bombing of Yemen, the poorest country in the Middle East.

The anti-Muslim, xenophobic, nationalist right has persistently exploited these rare Islamic extremist attacks on Westerners as confirmation of a supposed "clash of civilizations" — a concept that was in turn fostered and coddled by establishment intellectuals like Samuel Huntington (and systematically picked apart by iconoclasts like Edward Said).

What this deranged discourse ignores is, first and foremost, that the primary victims of extremist groups like ISIS and al-Qaeda are not Westerners; they are in fact overwhelmingly Muslims who live in the Middle East. And this is not even to mention how the narrative conveniently overlooks the fact that significantly more terrorist attacks in the West, and in the U.S. in particular, are carried out by the far-right.

The irony of anti-immigrant slogans being shouted at a vigil for victims of an ISIS attack in Europe is that many of the refugees seeking asylum in Europe are themselves fleeing even more horrific, and much more frequent, ISIS atrocities in their home countries — such as the soccer stadium slaughter last week.

Like the burgeoning neo-fascist movement in the West, ISIS thrives on these double standards. They help destroy the "gray zone" in which Muslims and other minority communities are accepted; they help push people toward extremism, of both the Islamist and the Islamophobic stripes; they help divide and encourage hatred to thrive.

The Brussels attacks are certain to be indelibly seared into the consciousness of every citizen in the West today; will the vicious attacks on the Lahore park and Baghdad soccer stadium be as well?