Much has already been made of Donald Trump's meteoric political rise. But not enough has been said about this 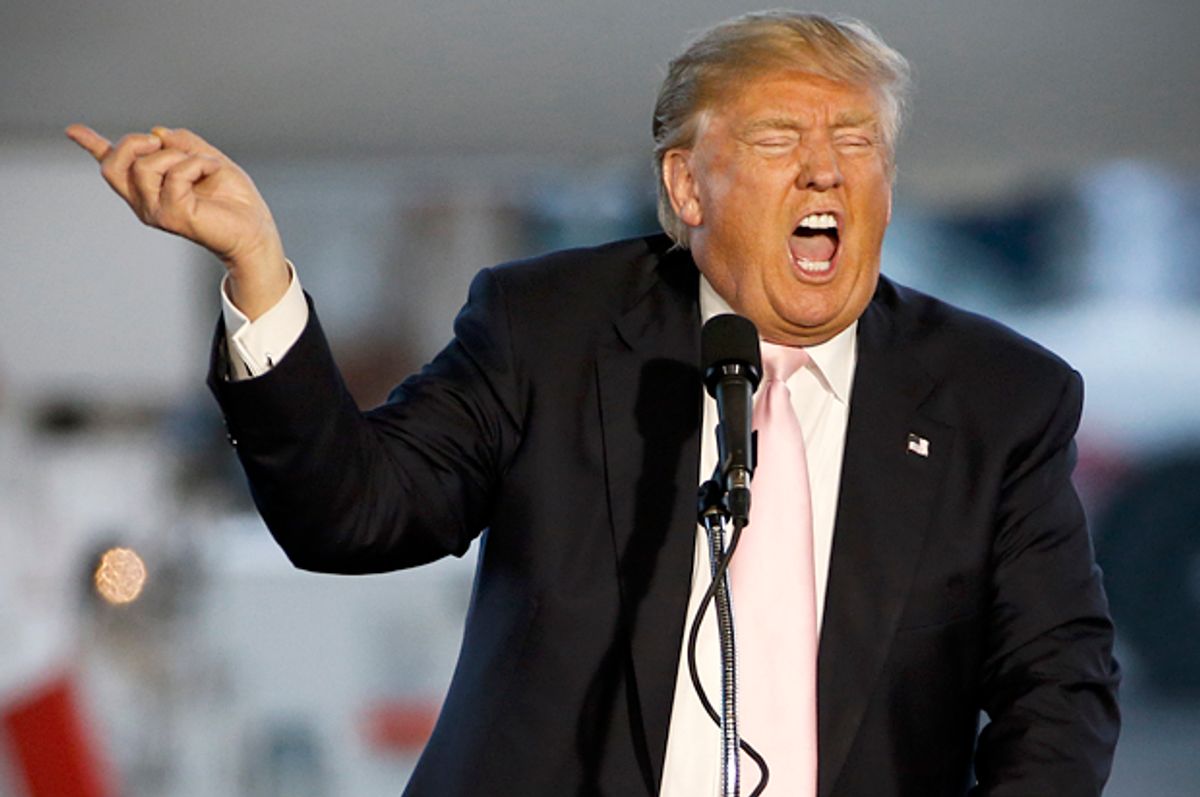 There is one overriding story this election season, and it concerns how Donald Trump has confounded pundits who assumed he was the kind of joke people would laugh at rather than vote for. It's the story of how the media cover him endlessly, saving his campaign millions of dollars in ad buys and contributing to a self-fulfilling prophecy of popularity. It's the story of how Republican leaders profess to be appalled by someone who is really just offering a more explicit and emphatic version of the racism, sexism, xenophobia, and casual dismissal of inconvenient facts that they've been peddling for years. (One difference is that when Trump offers red meat to right wingers, he does it literally.)

Most of all, the story, the horror, is not about one preening blowhard but about how millions of people -- at this point, nearly half of all Republicans -- have taken the man's measure, listened to his recklessly inaccurate claims, his vile hate speech rationalized as bold resistance to “political correctness,” his compulsive boasts and taunts... and have said, "This is who should be President of the United States."

Political scientists have correlated Trump's popularity with a wide, though often latent, streak of authoritarianism in the populace, a long-standing willingness to cheer a demagogue who spews venom at those who are Not Like Us -- "us" being mostly straight white Christian men.

(The academic study of authoritarianism began shortly after World War II in an effort to understand how apparently ordinary individuals in a civilized society could support Fascism.)

Psychologists, meanwhile, tell us this real estate tycoon turned reality TV star is narcissistic. And they're not using that word as a casual epithet, a synonym for "conceited" or "egotistical," but in the clinical sense that refers to a serious personality disorder. Trump is a useful reminder that someone can be rich and famous without being a successful human being by any meaningful psychological or moral standard.

In short, we have multiple lenses -- all of them serviceable -- through which to view this no-longer-amusing phenomenon. But I want to propose one that hasn't received much attention: Trump can be seen as a funhouse mirror that offers an exaggerated reflection of our culture's addiction to competition.

Competition exists on two levels at once. On the one hand, it's a personality feature: a need on the part of certain individuals to defeat others in order to feel good about themselves. On the other hand, it's a structural arrangement in which some people must fail in order that others can succeed. Such an arrangement is not a fact of life; it's one possible way to set up a workplace, a classroom, a playing field, or a society. Broadly speaking, there are two alternatives to it: One person's success can be unrelated to how well others do, with each individual or group pursuing goals independently; or one person's success can depend on others' doing well, too, so that everyone must cooperate in order to succeed. In most cases, competition turns out to be the least productive of the three arrangements, particularly on tasks that are challenging or demand creativity -- a surprising, if not heretical, conclusion that emerges from decades of research across many disciplines.

But let's consider the first variation: competition as a personal attribute. When a New York Times critic recently observed, “The prime imperative of Mr. Trump is that he not be made small. He must be yuge!” – it's important to add that this man is focused on size -- and everything else -- in relative terms. His buildings must be taller (and of course be emblazoned with his name); he must be richer, have more Twitter followers and higher poll numbers, attract prettier women and more fawning sycophants, be the shrewdest deal-maker and better loved by the masses -- compared to everyone else.

For many years, it's been clear that Trump is not only driven by a relentless project of self-aggrandizement but by a furious need to win. More than a quarter-century ago, in a lengthy interview, he sounded those themes repeatedly, insisting that everything he did was the “finest,” “most spectacular,” “number one,” “the best.” You “walk into Mar-a-Lago [his private club in Palm Beach] and see ceilings that rise to heights that nobody's ever seen before.” He also spoke of the need to be “tough,” explaining that “weakness always causes problems,” admitting that he's never satisfied with what he has: “I truly believe that someone successful is never really happy, because dissatisfaction is what drives him.”

In his rambling remarks when he announced his candidacy for president last year, Trump's worldview clearly was still all about winning and losing: "We used to have victories, but we don’t have them [any more]. When was the last time anybody saw us beating, let’s say, China in a trade deal? They kill us. I beat China all the time. All the time." In fact, he brags tirelessly not merely of his accomplishments but of how he has triumphed over others, and he makes a point of demeaning and debasing his adversaries, which include anyone with the temerity to challenge him. Even when he attempts to sound accommodating, he resorts to competitive language, such as his recent declaration that sounded like self-parody: "Nobody respects women more than I do."

When Otto Kernberg, one of the most eminent psychoanalysts of the last 50 years, was asked to explain narcissism, he replied that such an individual "cannot sustain his or her self-regard without having it fed constantly by the attentions of others." Those others "count only as admirers," and the narcissist then tends to resent people "because of his dependency on them." Kernberg's key insight, though, which is widely accepted among mental health experts, is that "it is self-hatred, rather than self-love, that lies at the root of pathological narcissism." Grandiosity and perpetual self-congratulation don't reflect overly high self-esteem but precisely the opposite: an attempt to overcompensate for deeply rooted self-doubt.

Empirical research has not only borne this out but pointed to similarities with a need to come out on top.  Richard Ryckman, professor emeritus of psychology at the University of Maine, and his colleagues discovered in a series of studies that hypercompetitive individuals tend to be "highly narcissistic" and, like other narcissists, "to have low self-esteem." This makes sense when you think about it. A drive to outshine others is completely different from a healthy desire to be good at something. Competitive people are defined by a persistent sense of personal inadequacy. Winning is more a need than a desire; it's something they have to do to prove their competence, their value -- because their very sense of self is at stake.

The proof lies in the compulsive, repetitive nature of the quest, and also in the anxiety -- sometimes expressed as rage -- that losing unleashes. One is never secure because one's inadequacy can be exposed at any time. No victory is ever definitive; no fortune or collection of trophies is ever enough. It's like pouring liquid into a container with a hole in the bottom because winning gets nowhere near the psychological deficits that pushed one to compete in the first place.

Just as brutality is typically a reaction to a fear of weakness -- James Gilligan, an expert on criminal violence, once commented that “The most dangerous men on earth are those who are afraid that they are wimps” -- so narcissism and competitiveness bespeak profound self-doubt or even self-loathing. The less at ease you are with yourself, the more you need to swagger, to slap your name on all your buildings, to have others pay homage to you -- all in a desperate and ultimately futile attempt to prove that you're not a loser. See? I must be a winner if I can shout "You're fired!" at all those people, deport millions of immigrants, make Mexico pay for my wall. I must, right? Right??

Apart from its causes, there is also a substantial body of research on the effects of competition, regardless of whether it's required by a given environment (in which people are set against one another) or driven by the psychological needs of an individual. Competition tends to breed envy of winners, contempt for losers -- that's one of the ugliest words in the American lexicon -- and suspicion of just about everyone. Even if that person over there isn't your rival today, he might be tomorrow. Competition leaves people in a self-protective crouch, wary and untrusting. As the influential personality theorist Karen Horney wrote many years ago, "The satisfaction and reassurance which one can get out of human relations are limited and the individual becomes more or less emotionally isolated" as a result of competition.

And that's not all. A number of studies have shown that the experience of competing makes us less sensitive to others' needs and less able to imagine how the world looks from points of view other than our own. One experiment found that just growing up with a competitive parent was enough to reduce a child's generosity; the toxic effects are analogous to secondhand smoke. Social psychologists even had to coin a word to describe an effect they kept finding: Competition breeds "counterempathy" -- a tendency to feel elated by other people's failure and depressed by their successes. And when groups (instead of individuals) compete, there's a tendency to dehumanize and objectify those in the out group.

To read these accounts of competition's consequences and causes is to understand more fully what animates a Donald Trump. But in a healthy society, a man like him would be regarded as a cautionary tale or as someone who needs help. In our society, by contrast, he is widely admired. His need to be Number One is different not in kind but only in degree from the doubt that drives many people. Put it this way:  Each culture offers its own mechanisms for dealing with self-doubt. In ours, which is wedded to the assumption that life is a zero-sum game, one of the chief mechanisms is competition. It is America's compensatory strategy of choice -- indeed, virtually our state religion.

Low self-esteem, then, is a necessary but not sufficient cause of competition. The ingredients include an aching need to prove oneself and the approved approach for doing so at other people's expense. When we have both, we have millions of people who try to feel better by making the next person feel worse. Trump is a poster child for that pathology, indeed someone in whom it takes a particularly ugly form. But in another sense he is just a symptom of a broader cultural ill that all of us need to acknowledge and address.

Alfie Kohn the author of 14 books, including "Unconditional Parenting" and "The Myth of the Spoiled Child." He lives in the Boston area and lectures widely to teachers, parents and researchers.