Bernie Sanders supporter Susan Sarandon says she may not vote for Hillary Clinton: "Donald Trump will bring the revolution immediately"

"If he gets in, things will really explode,” Sarandon said of Trump in an interview with MSNBC's Chris Hayes 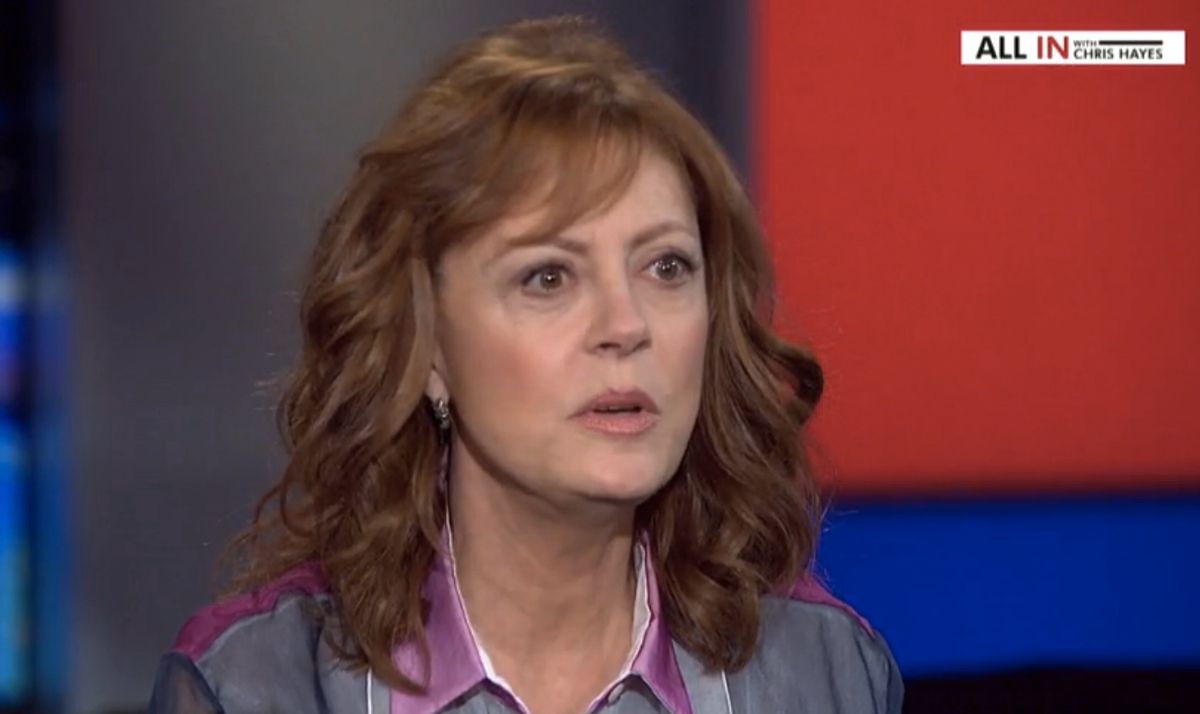 “I really want to be on the right side of history and this is a shot we’re not going to have in my lifetime to have a candidate that’s so morally consistent, makes decisions, whose judgment proves to be true but does it at a time when it’s not popular, when it’s not comfortable,” Sarandon told host MSNBC Chris Hayes on Monday. The left-wing activists and actress has been a longtime supporter of Sanders and has harshly criticized Clinton in the past.

“I think Bernie would probably encourage people to [support Hillary if he loses] because he doesn’t have any ego in this thing,” she said. “But I think a lot of people are, ‘Sorry, I just can’t bring myself to [vote for Hillary].'”

“How about you personally?” Hayes asked. “I think, in certain quarters, there’s growing concern that the folks that are into Bernie Sanders have come to despise Hillary Clinton or reject Hillary Clinton and that should she be the nominee which is as yet undetermined, they will walk away,” Hayes said.

“But isn’t that crazy?” Hayes insisted. “If you believe in what he believes in?”

“Yeah but she doesn’t,” Sarandon shot back, before tearing into Clinton, who she has described as having "failed" her with her 2002 vote in favor of the Iraq invasion. “She accepted money for all of those people. She doesn’t even want to fight for a $15 minimum wage, so these are people that have not come out before, so why would we think they’re going to come out now for her, you know?”

Hayes then pressed Sarandon, a backer of John Edwards during the 2008 primary and co-chair of Ralph Nader's National Steering Committee in 2000, if she could bring herself to vote for Clinton in a general election match-up against Trump.

She went on to explain that she knows “Republicans who have written [Sanders] in already. You know, and they just feel like [Clinton's] not authentic. She’s a liar, that they don’t trust her so what difference does it make.”

“You know, if you’re a small farmer and worried about fracking on your property, in Idaho they just passed a bill where they can frack on private land," Sarandon continued. "You know she’s taken money from fracking. Why would you think that she’s going to have your back?”

But what about the dangers of a Trump presidency, Hayes asked.

"Some people feel that Donald Trump will bring the revolution immediately if he gets in, things will really explode,” Sarandon said, arguing against what she described as a dangerous status quo:

If you think it’s pragmatic to shore up the status quo right now, then you’re not in touch with the status quo. The status quo is not working. It’s dangerous to think we can continue the way we are with the militarized police force, with privatized prisons, with the death penalty, with the low minimum wage, with threats to women’s rights, and think you can’t do something huge to turn that around. The country is not in good shape. If you’re in the middle class, it’s disappearing.

Sarandon also added, "I don't like the fact she talks about Henry Kissinger as her go to guy for the stuff that's happened in Libya. I don't think it's good."