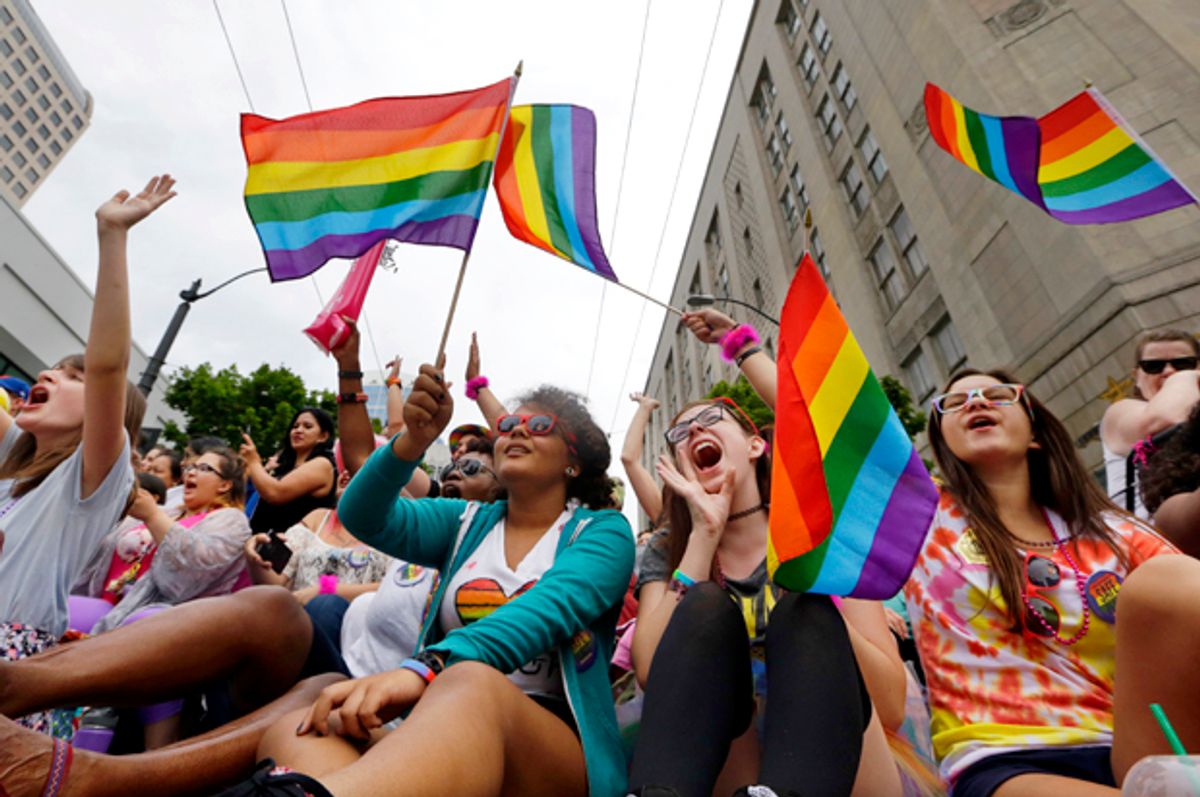 If recent headlines out of North Carolina and Georgia have you worried that you stumbled through a rift in spacetime and ended up back in 2014, I have some good news. You did not pull a Franco; the year is still 2016; Jan Brewer does not currently hold elective office.

As firmly ensconced in the here and now you may be, however, the same can’t be said for a significant chunk of the political class in those two aforementioned Southern states.

In North Carolina, for example, the governor, Republican Pat McCrory, is vigorously defending the statehouse’s right to override local anti-discrimination laws protecting LGBT people. You could even say he’s “shoving” bigotry “down their throats.” The outrage the move has inspired, he says, is “more political theater than reality.” (Let’s assume his choice of words is not a dogwhistle.)

In Georgia, meanwhile, the story is similar but slightly different. There’s an anti-LGBT law involved here, too. But unlike his counterpart to the north, Nathan Deal, Georgia’s Republican governor, is not defending the bill. He vetoed it, in fact. He claimed he did so in order to preserve Georgia’s reputation for “warm, friendly and loving people” — most people think the influence of big business is more to thank (or blame, depending).

If that theory is true, though, it suggests that the Republican Party’s coalition — that famed “three-legged stool” of foreign policy hawks, social conservatives, and wealthy people who didn’t want to pay taxes — may be even more broken than we thought. This, after all, can’t be blamed on Donald Trump. So what gives?

The Washington Post’s James Hohmann has a theory. And while it’s not especially original, it’s hard to imagine it doesn’t contain multiple kernels of the truth:

One big difference between the Tar Heel State and the Peach State: McCrory is up for reelection this November, and Deal won his second term in 2014. McCrory needs votes right now more than he needs campaign donations or a friendly business climate. The North Carolina governor has pleased evangelicals, but he’s getting hammered in the local press and businesses are threatening to move.

If you’re trying to understand a politician’s motivations, about 99 percent of the time, “getting reelected” is the correct answer. So I’m not going to disagree with Hohmann, there. Especially if we keep in mind that politics in North Carolina is increasingly purple, and that McCrory, no moderate, will likely need a fired-up base.

That said, I wanna toss out another theory, one that might explain why McCrory’s response to big business’ threats to abandon the state has been so blasé. That theory, in two words? Art Pope.

For those who aren’t familiar with Mr. Pope already, think of him as North Carolina’s version of the Koch brothers, but rolled into one — and without the Koch’s ostensible belief in a hands-off approach to social issues. As the populace of North Carolina has moved left, the state government has veered right; and perhaps more than any other individual, that’s thanks to the hard work (and big spending) of the retail magnate.

Unlike the big business interests that carried the day in Georgia, Pope is not a fan of protecting the rights of LGBT people. And in this respect, he’s quite willing to spend money in honor of his prejudice. He’s devoted hundreds of thousands of dollars to anti-LGBT groups through his foundation already. It’s hard to imagine he’s got a problem with the bill — much less that McCrory would sign it if he did. (He made Pope his budget director, for God’s sake.)

And why does the opinion of one man — one person, in a state of 10 million — make such a difference? Well, that’s where another part of Hohmann’s piece comes in:

By giving the donor class more influence, the Supreme Court’s decision in Citizens United has further empowered fiscal conservatives at the expense of social conservatives.

The religious right has been making strides at limiting women’s access to abortion but remains on the defensive in the culture war over same-sex marriage. The Koch brothers, for example, are libertarians who see social issues as a distraction. Or, at best, a wedge to mobilize votes to advance their economic agenda. Billionaire Paul Singer, one of the GOP’s biggest donors, is an outspoken supporter of same-sex marriage and presses candidates he contributes to on this issue. Almost every single Republican operative in D.C. sees gay marriage as a settled issue after last year’s Supreme Court decision, but many in the grass roots disagree.

It may be true, as Hohmann writes, that GOP elites in D.C. think “gay marriage [is] a settled issue.” But it certainly doesn’t look that way to conservatives on the ground in North Carolina — or, it appears, to Art Pope. And in the post-Citizens United era, politicians can ignore whole swathes of society (not just LBGT people, but also, increasingly, big business) as long as they have a benefactor who will stick with ‘em.

Not so long ago, it was nearly impossible to imagine a Southern Republican bucking the Chamber of Commerce’s consensus. But we now live in a brave new world — and it’s a pretty good one, too, just so long as your bank statement looks like Art Pope’s.