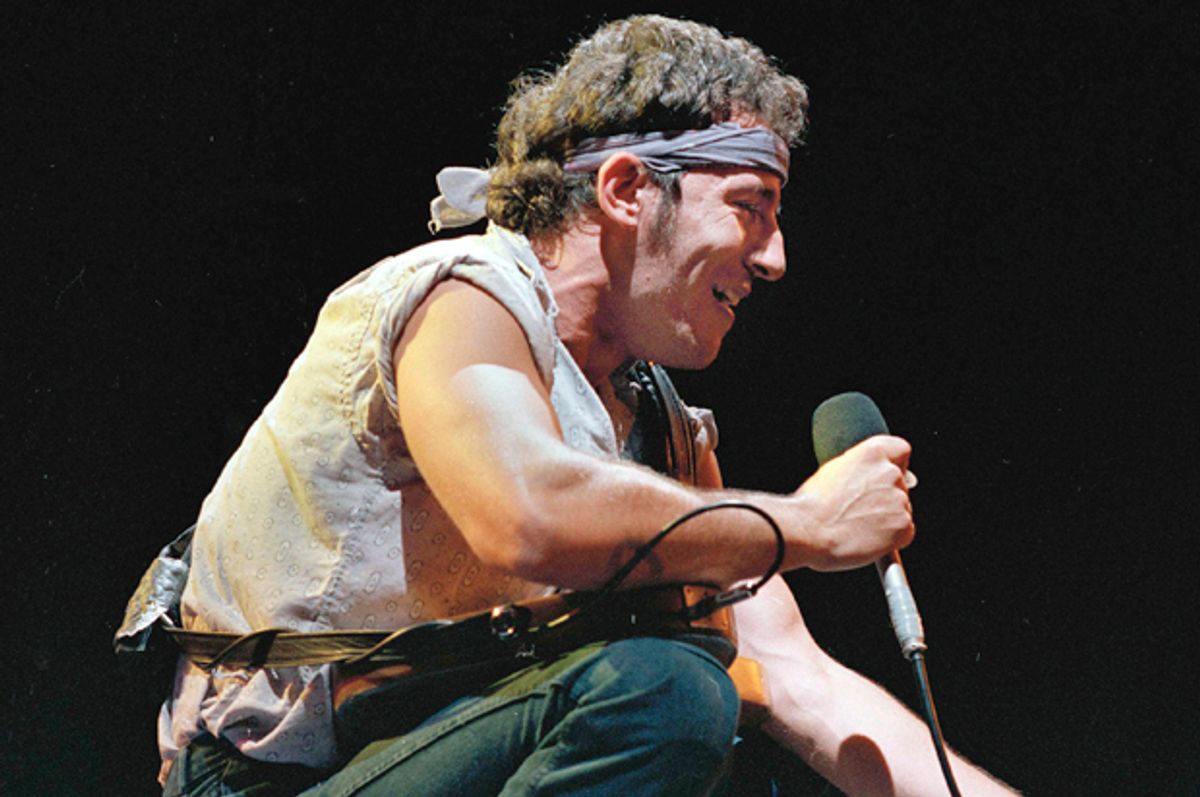 In early March, my husband and I attended a Bruce Springsteen & The E Street Band show in St. Louis at the Chaifetz Arena. We were lucky to be there: Tickets to the show, which took place in the smallest arena of his current tour celebrating 1980's "The River" album, sold out in roughly a day. Thanks to some good Ticketmaster mojo, I snagged a pair of the least-expensive seats—grabbing whatever I could before the online crunch overloaded the system—and we flew there for the weekend to see old friends and other Springsteen pals from near and far. When we got to the venue and saw our seats, however, we found out they were in the top row of the second tier of the arena. That normally wouldn't be a problem—except for the fact that due to my disability (cerebral palsy), my balance is unsteady, a condition exacerbated by heights.

Thankfully, big venues account for situations where patrons have trouble reaching seats, and provide seats on level platforms where stairs aren't required. By the time we arrived at the Chaifetz Arena, however, all but one of these seats was occupied, meaning the options were to either gingerly climb up to the rafters or sit by myself for three hours while my husband took our seats. It took the above-and-beyond efforts of a staffer named Nicole to be able to figure out a solution, namely a second chair for my husband behind the lone available platform seat. (The show, it goes without saying, was great.) Whenever I encounter a venue where accessibility might be a concern, the scenario described above is always a potential outcome.

So imagine how incensed I was to read a Billboard piece, "My Springsteen Sin: A Public Apology," centered around writer Mitch Myers recounting the time he pretended to have a disability to get into a summer 1984 E Street Band show. The stunt was the brainchild of Myers' college buddy, who worked at a rehab center and stole (rather, "connived to garner") tickets meant for staff and patients for his own personal use. To use them, however, Myers needed to use a wheelchair while at the show, despite not needing one. To make a long story short, he didn't enjoy the concert—in fact, he's overcome with guilt and shame during the show, ditches the chair in the van, and re-enters the venue without it—although he stays to the bitter end of the encore anyway. Throughout the article, Myers is contrite and apologetic, blaming "a lot of peer pressure" and assuring "I just didn’t know any better, even though I should have."

Although he's clearly relieved to get this incident off his chest, from a journalistic standpoint, it's difficult to figure out why this piece was published. It didn't relate the incident to the broader conversation of accessibility at music venues, for example, or tie it to any modern ticketing concerns. For example, the least-expensive seats at an arena show are frequently in the most inaccessible areas for those who have disabilities, and not every ticketing platform gives patrons the options to buy accessible seats online. It also didn’t explore any parallels to the abuse of services meant for those with disabilities—from the preponderance of fake service dogs to people fraudulently using accessible parking placards—and how that affects those who legitimately need this assistance. And readers never learn how Myers changed or what tangible lessons he learned, and whether this experience made him more aware of or sensitive to disability issues going forward.

In fact, the piece made him seem unlikeable and unsympathetic, even though the incident happened well over 30 years ago. Perhaps this is because the tone of the piece is shockingly antiquated in how it perceives and describes people with disabilities. The writing perpetuates the negative stereotype that using a wheelchair is some sort of alienating, shameful prison, something about which to be embarrassed. Myers receives "looks of pity, kindness, sympathy and curiosity" while on the way to his seat, for starters, which reminded him "of those sensitivity training exercises where you’d take on a challenging, unfamiliar, perhaps stigmatized role—like using a wheelchair—to help one empathize with people whose lives had left them no choice in the matter." (Italics from the original story.)

Attendees who use wheelchairs are also subtly othered, viewed as a surprising presence. Myers is inexplicably startled at who he's sitting next to at the show—"a guy in a wheelchair—someone who really needed a wheelchair"—and, later, is overwhelmed by guilt as he noticed a man in a wheelchair next to him who "was totally into the show and having a really great time. He looked happy, entertained and inspired, like someone at a Bruce Springsteen concert should look." In context, this aside does nothing to further the narrative: Why point out that the person next to him was reacting like everybody else in the arena? How should the man using a wheelchair have been reacting to an amazing show? All of these attitudes may have been common in 1984—six years before the ADA was passed in the U.S.—but there's no excuse for a piece written today to propagate such ignorant characterizations.

On a broader level, the article also ignores modern language guidelines. Take the phrase "the tickets were marked for the handicapped." The National Center on Disablity & Journalism's official style guide notes that "disability and people who have disabilities are not monolithic," and so journalists are asked to "avoid referring to 'the disabled' in the same way that you would avoid referring to 'the Asians,' 'the Jews' or 'the African-Americans'"—e.g., phrases generally seen as highly offensive. In general, the phrase "handicapped" as well has fallen out of favor, replaced by "accessible" or "disabled" as an adjective or modifier.

Worse yet was this section: "Unable (and unwilling) to return to the handicapped row and unmoored from the constraints of my wheelchair, I split off from [my friend] Berry and did what any red-blooded American Springsteen devotee would do. That is, I ran up to the front of the stage with the other hardcore Boss fanatics." Not only is the phrase "constraints of my wheelchair" wince-inducing—as NCDJ notes, "Avoid 'confined to a wheelchair' or 'wheelchair-bound' as these terms describe a person only in relationship to a piece of equipment. The terms also are misleading, as wheelchairs can liberate people, allowing them to move about…"—it's perpetuating an ableist idea that the embodiment of a "hardcore Boss fanatic" and "red-blooded American Springsteen devotee" is one who's non-disabled. People can be huge fans of a group or artist without being right up front, standing, cheering and jumping—and assuming that's the default state is both incorrect and pernicious.

Above all, the defensive cheekiness of the intro ("I sincerely hope that by confessing my sin and acknowledging my personal weakness that it might help us all do better in some way. I mean, it could, couldn’t it?") trivializes the entire situation. In fact, it's as much of an insult as Myers establishing this confession isn't "for the sake of a few cheap laughs"—as if there's anything remotely amusing about being someone faking a disability, or his own shortsightedness—or calling entering the venue in a wheelchair an "involuntary crash course in what it might feel like to be physically disabled." For starters, it wasn't involuntary: He had the choice to say no all those years ago, and didn't. And while he's clearly seen the error of his ways, the fact remains that plenty of concert-goers don't have the privilege to toss away their wheelchair—or ditch their disability—and enjoy a concert by a beloved artist. Admitting his youthful idiocy doesn't make Myers a moral compass or provide a teachable moment: It just underscores how far we've come in terms of disability discussions, but yet how far we still have to go.