Ted Cruz's health care calculation: Why Obamacare's loudest foe has no plan to replace it

Republican health care policy is a mess of contradictions, so Cruz will probably just stick to attacking the ACA 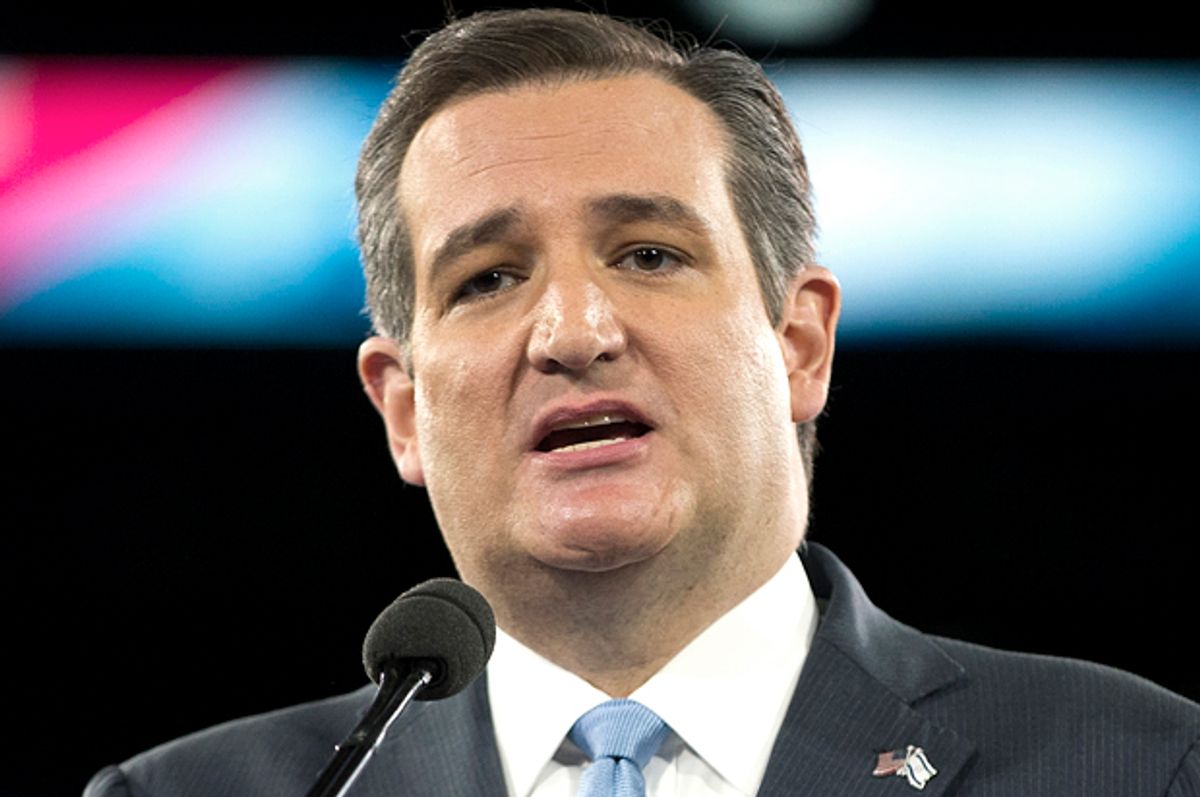 The 2016 Republican presidential primary has never really been about policy, but now that the race is down to two cartoon character villains and confused grandpa John Kasich, there’s really not much going besides personality clashes and speculative arguments about electability. When the candidates aren’t whacking each other for what they or group in their orbits have said about each other’s spouses, they’re arguing over which one of them does better in hypothetical match-ups against Hillary Clinton. Anyone looking for a substantive policy disagreement is going to be disappointed.

To that point, Politico published a piece Monday noting that Ted Cruz – the scourge of Obamacare, the man who held the government hostage to try and kill off the Affordable Care Act – still doesn’t have a health care plan. Cruz may style himself an anti-establishment Republican, but on health care policy he’s right in line with Paul Ryan, Mitch McConnell, and every other GOP member of the “Washington cartel” he rails against: they all hate Obamacare, and they all have no idea what should replace Obamacare. As Politico notes, Cruz is coming under some pressure from Republicans to get a plan out there now that he has emerged as the default choice for establishment types who are terrified of Donald Trump securing the nomination.

I’m dubious that Cruz will oblige them anytime soon. First and foremost, Cruz doesn’t actually seem like he cares too much what comes after Obamacare. He’s more about getting rid of it and seems largely content to just to let things return to the pre-Obamacare hellscape of coverage denials and life-crushing medical bills. At a January debate, he said that “everyone agrees we need health care reform” post-Obamacare, but the rough sketch he laid out for healthcare policy was free-market hand-waving that steered well clear of anything having to do with pre-existing conditions. The legislation he proposed while the King v. Burwell Supreme Court ruling was still outstanding would have repealed a large chunk of Obamacare and replaced it with basically nothing. When confronted by voters who want to know what will become of their newly insured loved ones once Obamacare is repealed, Cruz responds with talking points about the evils of health care regulations.

Cruz is also likely sensitive to the fact that health care policy represents something of a trap for conservatives and Republicans. One of the GOP sources quoted by Politico said it was incumbent upon Cruz to “articulate not just repeal, but what is the center-right health care system that he’s defining as the future of health care?” The term “center-right” should stand out like a signal flare, given that Ted Cruz spends most of his waking moments disparaging anything that carries even a whiff of moderation or centrism.

The problem for Republicans is that no one has been able to figure out what is too liberal and what is appropriately conservative when it comes to healthcare policy. They want legislation that expands coverage, but the mechanisms for effectively improving access to coverage – subsidies, regulations, etc. – are viewed as unacceptably liberal. If Cruz sticks with his current plan to deregulate the insurance market and let the Invisible Hand sort everything out, he’ll get killed by Democrats for screwing over people with pre-existing conditions. But if he wades into the conservative healthcare debate and actually makes an effort to expand coverage, he’ll anger conservatives who believe the federal government has no role to play in providing access to healthcare. That’s what happened to Scott Walker, who proposed a toothless mish-mash of an Obamacare replacement policy that was still slammed by conservatives as a “new federal entitlement program.”

But, again, Cruz doesn’t seem to have a whole lot of incentive to offer any sort of plan. Right now he can be “conservative” by default on healthcare policy given that his two remaining opponents are Donald Trump (who says he would spend federal money to make sure people don’t “die in the street”) and John Kasich (who defied his own Republican state legislature to accept Obamacare money to expand Medicaid in Ohio). Releasing a detailed healthcare plan would only complicate things for him. So for now he’ll probably just stick with his reliable roster of absurdly false anti-Obamacare applause lines and trust that no one will press him too hard on what will happen to the many millions of people whose health insurance he wants to take away.