The strange silence about Hillarymania: Clinton fires up voters more than Bernie does, so why is no one talking about it?

More Clinton supporters are enthusiastic than those backing Sanders, but the media won't tell you that 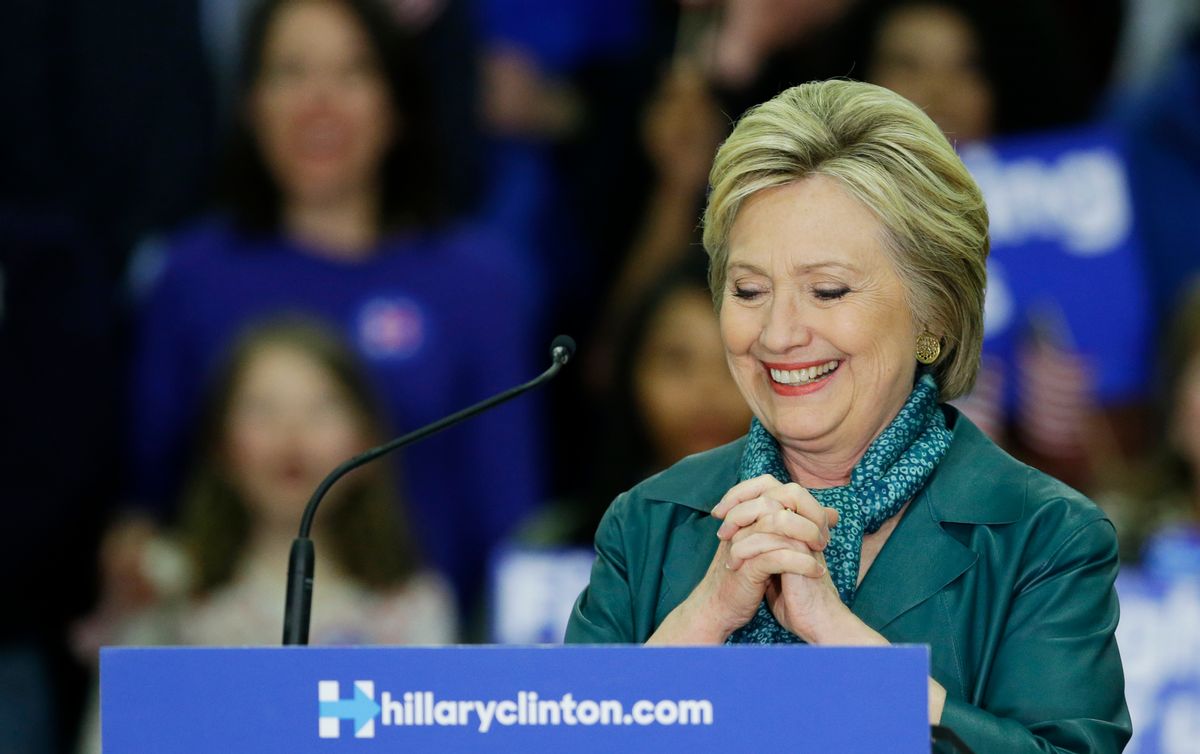 Hillary Clinton suffers from an "enthusiasm gap." Or so we are told, over and over and over again. Even people who like her can't really like her, can they? But she reminds middle-aged male pundits of their ex-wives! Surely everyone sees things the same way, don't they?

On Sunday, Howard Gutman of The Washington Post argued that Clinton is so uninspiring that her only hope of winning swing states is anti-Donald Trump sentiment. " Some people like her and many more tolerate her, but virtually no one is enthusiastic about her," he writes.

Part of the problem, he suggests, is she's such a boring feminist, which we all know is such a tedious ex-wife quality.

"Clinton still talks about glass ceilings rather than gig economies, and everyone has heard her by now, on many occasions," he writes, calling it the "same pitch, different day" problem.

Gah, doesn't it remind you of how your ex-wife was always on and on about how she expects you to do half the chores and support her career as much as hers and take care of the children and on and on and on?

Except not, because the day after Gutman wrote yet another entry into no-one-loves-Clinton story, Gallup released a poll showing that actually, her supporters love her more than any other candidate besides Donald Trump, a man who literally expects everyone around him to act like he's God's gift.

Sixty-five percent of Trump supporters are high on enthusiasm, which is unsurprising, given that the man literally has his people making loyalty oaths at campaign events. Sanders and Clinton earn their enthusiasm by asking for, rather than demanding, love.

As anyone with a computer or TV knows,the narrative has been the opposite of what this hard polling data shows. The assumption is that Sanders is the one with the enthusiastic base and that Clinton's supporters are dragging their feet to the polls. This is why the Sanders mantra has been that high turnout benefits his candidate, even though he actually performs better in caucus states, where turnout is low compared to primary states, where Clinton does better. (Both common sense and research show that the higher demands on people's time and participation is a barrier to entry in caucus states.)

It's not hard to see why this false narrative that Sanders inspires more enthusiasm has taken root.  He is the challenger running up against the favorite, and it is known that everyone likes an underdog. That, and his surprisingly robust chances against Clinton suggest a rising tide narrative, again not unfairly.

On top of that, most journalists who echo the Sanders enthusiasm narrative spend a lot of time on social media, and if you do that, then it's safe to say that it looks like Sanders is inspiring a lot of enthusiasm. There is an explosion of memes and chatter about the "revolution" and sharing every single story they can find that says something positive about Sanders's chances.

But if you dig in, it also becomes quickly clear that much of the online enthusiasm isn't really pro-Sanders so much as it's anti-Clinton. There are  thousands, probably millions of social media messages which are more about using Sanders as a cover to harass women and their allies than as legitimate advocacy for the candidate. Remove the mansplaining, harassment, and gotcha trolling, and the amount of Sanders traffic isn't quite so awe-inspiring in volume.

Clinton isn't a meh candidate, in other words. She inspires passion, both in her haters and in her supporters.

If you give it a moment's thought, that Clinton would be such an inspiring figure to her supporters makes perfect sense. She has spent two and a half decades in the spotlight, enduring huge amounts of sexism as every single man in the country who feels threatened by smart women or powerful women projects all his anxieties on her with the passion of a thousand burning suns. But she hasn't stopped striving. She eats haters for breakfast and keeps smiling, all while more haters are telling her she doesn't smile enough.

For supporters, especially female supporters, who are sick to the teeth of all this sexist nonsense and sometimes wonder how they are going to keep on fighting another day, Clinton's resilience is the stuff of legends.

It's a symptom of how male-dominated our media continues to be that this narrative is so stifled. To get ahead in such an environment, most women feel the need to wear their Cool Girl armor, to show they're down and not at all threatening to the men around them. Rah-rah feminism is most definitely not Cool Girl behavior.

Saying Clinton's moxie inspires you invariably attracts derogatory sneers about how you're a "vagina voter". Supporting Clinton requires dialing down the enthusiasm, couching it in lots of reassurances that Sanders is a great guy (reassurances Sanders supporters feel no need to offer about Clinton), and striking an apologetic stance for wanting to see a female president. Ideally, you have a daughter you can wield as shield for the female president thing, since it may not be okay to want it for yourself, but you are a little more allowed to want it for your daughter.

There's a lot of pressure on Clinton supporters to tone down the enthusiasm, but that shouldn't be confused with an actual lack of enthusiasm for Clinton. They may be quieter, but as Clinton's continued dominance at the polls shows, volume doesn't matter when you're casting a ballot. Or as Dave Weigel was saying on Twitter Tuesday morning:

The stories: How Hillary’s blowing it, how Trump changed everything.