This primary is making everyone dumber: How the Clinton & Sanders camps are making their lives harder this week 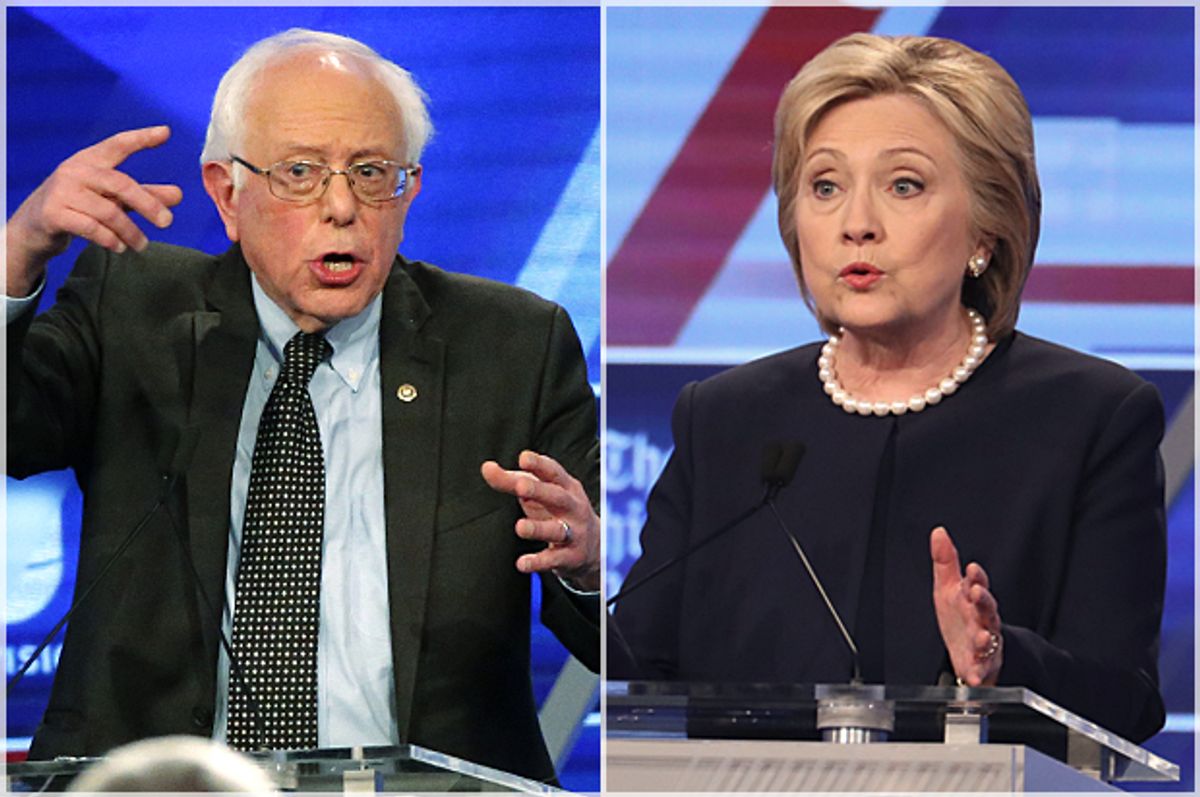 Maybe the long primary season is getting to everyone. Or maybe the Democratic candidates’ staffs were all still in sugar comas after stuffing themselves with Easter candy. Whatever the reason, senior officials for Bernie Sanders and Hillary Clinton spent Monday proving the old adage about it being better to keep your mouth shut and be thought a fool, rather than to open it and remove all doubt.

Let’s start with the Clinton side. Fresh off its sweeps of Saturday’s three primary contests, the Sanders campaign challenged the former senator from New York to a debate in Brooklyn before the state’s primary on April 19. This is a reasonable demand from the Sanders perspective. New York is a huge primary, with 247 delegates up for grabs. The candidate has dominated caucuses but not done nearly as well in straight primary elections. It’s not an exaggeration to say that an overwhelming win there might be the candidate’s last chance to prove he can win big in such a contest and that he still has a viable shot at the nomination.

Monday morning, Clinton campaign strategist Joel Benenson went on CNN to fill up some of its airtime. Asked about the debate challenge, he responded with the tone policing the campaign has apparently decided is its best bet right here.

"They’re talking about running harsher negatives now…I think the real question is what kind of campaign is Sen. Sanders going to run going forward…This is a man who said he’d never run a negative ad ever. He’s now running them, they’re now planning to run more. Let’s see the tone of the campaign he wants to run before we get to any other questions."

Campaign chairman John Podesta said something similar last Friday, and it sounded just as dumb then. There is nothing inherently wrong or hypocritical about Sanders running negative ads. It’s what campaigns do when they want to win, no matter what high-minded garbage they once spouted to prove their candidate is only concerned with the issues/a different kind of politician/whatever other poll-tested phrases they want to employ to prove they don’t care about polls.

Furthermore, we all know Hillary Clinton would be running negative ads if the delegate counts were reversed. Her campaign might very well run some anyway just to keep Sanders at bay. That’s the sort of panic move her people are known for.

Sanders supporters already think the entire world is lined up against their candidate, evidence to the contrary notwithstanding. It is part of Sanders’ entire shtick to tell his fans the entire Democratic establishment wants them to go away. So this wagging of the finger, these condescending, Nurse Diesel-esque “Those who speak meanly will not get fruit cup” statements and faux wounded feelings from the Clinton camp are too disingenuous and transparent to be taken seriously.

Why not try being magnanimous instead? Why not say, “We haven’t decided on a debate yet. We’ll make that decision sometime in the future. Next question.” Then take your 300-delegate lead back to the office and get back to work. If Clinton really does want to pivot to the general election and start uniting the party, having her spokespeople tsk-tsk the rival campaign for considering a strategy that any other campaign would do is an unnecessary twisting of the knife.

Later that day, Benenson apparently compared Sanders’ stated plans to convince superdelegates to switch their support to his campaign to Nixon’s claim that he had a secret plan to end the war in Vietnam. Somebody take the shovel away from Benenson before the hole he’s digging reaches China.

Not to be outdone in the realm of stupid spokesperson errors, Sanders campaign manager Tad Devine was on a press call on Monday afternoon and wedged his foot so deep in his mouth he might have later needed the Jaws of Life to pry it out.

Sanders adviser Tad Devine told reporters that his candidate's large delegate deficit to Clinton was the result of the campaign's deliberate strategy to forgo certain states that they were certain to lose.

Devine asserted that the Sanders campaign did not invest serious cash or time in Texas, Alabama, Virginia, Louisiana, Tennessee, Missouri, Georgia, and Arkansas, and may have been able to compete if it had.

Sure thing, Baghdad Bob. And the Virginia men’s basketball team earned a trip to the Final Four by winning all of Sunday night’s game, at least up until the last six minutes.

As campaign spin goes, We only lost because we weren’t trying ranks right up there with garbage like Hillary Clinton can only win old Confederacy states for the most disingenuous bullshit we’ve heard this cycle. And like the Confederate argument, it’s transparently a lie. The Sanders campaign poured resources and effort into several of those states, particularly Texas and Virginia.

Furthermore, Sanders did put considerable time and energy into campaigning in states that Clinton won, including Florida, South Carolina, Arizona and Massachusetts. Considering the delegate-rich nature of those states (particularly Texas and Florida, which combined account for nearly one quarter of Clinton’s total delegate haul so far), it would be political malpractice to have not competed in them.

Plus, one could point out that of Sanders’ three big wins over the weekend, two came in states that Clinton barely contested (her entire Alaska campaign consisted of one ten-minute call-in radio interview) and the third, Washington, where she put on a much less aggressive campaign than the Vermont senator. Surely if the Sanders campaign can claim the unprovable negative that it lost some states because they didn’t bother competing in them, the Clinton camp could say the same.

With Bernie Sanders claiming the mantle of the pure, uncompromised leftist candidate in this primary, it’s easy to forget that his handlers are still career political hacks like Tad Devine. Monday afternoon, Devine did his client no favors.

But therein lies the paradox at the heart of this establishment-vs-upstart-insurgent narrative that has had a death grip on the Democratic primary for months now. For all the talk of the grassroots and revolutions and aspirational candidacies, both these campaigns are still run by professional spin artists. We forget that at our peril.