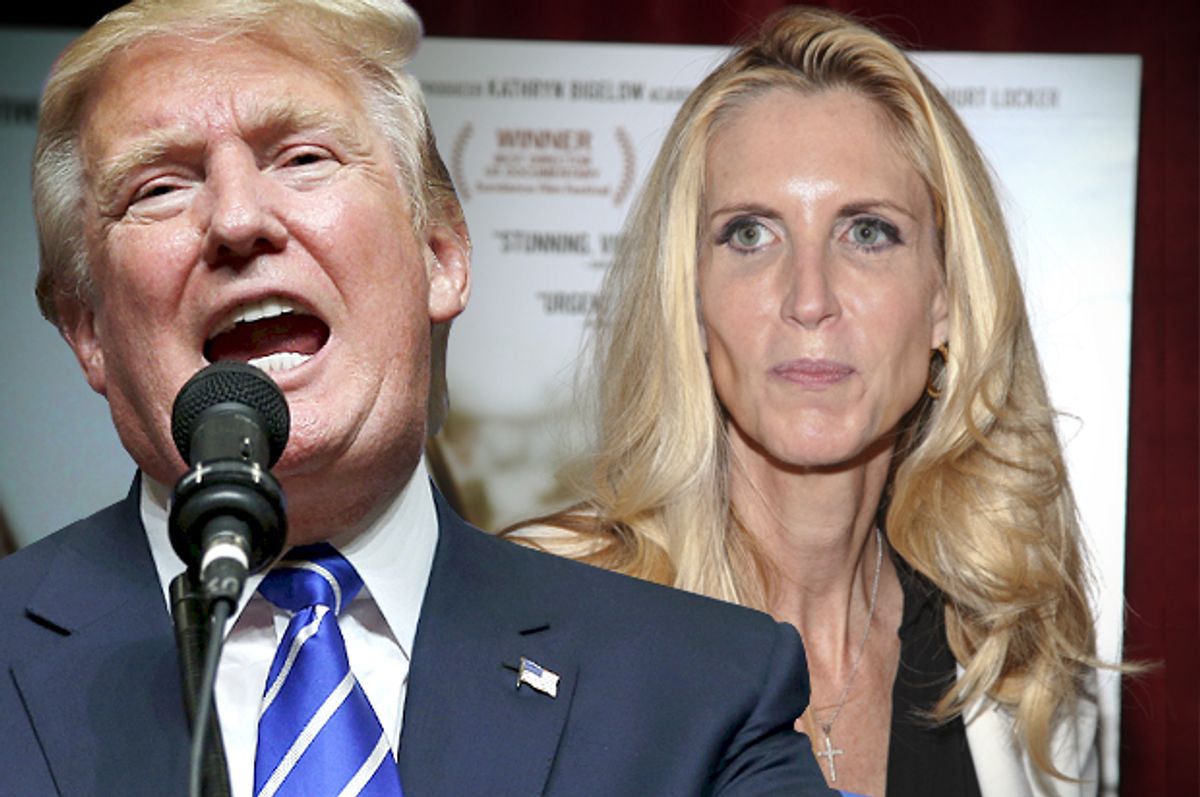 Ann Coulter is inarguably Donald Trump's most vocal backer, calling him the only hope for "the last genuinely Christian country on earth." But after the billionaire bloviator took a not-so-veiled swipe at the looks of rival Ted Cruz's wife, Heidi, Coulter has suddenly called foul, publicly chiding her candidate for behaving like a "mental" 16-year-old.

"Trump is different," Coulter told WMAL back in July, lavishing praise on the former reality TV star. "We have been lied to for 30 years about immigration. That's why Trump is striking this chord. He's attractive. He's tall. He's hilariously funny. I think he could be not only a nominee who could win but a third party candidate who would win."

But on Monday, the conservative firebrand admitted that even she had grown tired of Trump's “half-baked tweets at midnight," begging Trump to “please stop testing our patience.”

Unaware that the right-wing shock jock maintained any bar of decorum in political discourse, Salon looked back at a few of Trump's other controversial past statements that Coulter has defended:

Most Mexican immigrants are rapists and drug dealers:

Trump "won me over with that Mexican rapist speech," Coulter revealed earlier this year, referring to Trump's announcement speech last June and admitting that, "I didn't know much about him until" then:

Coulter applauded Trump's decision to boycott the second Fox News debate after network star and first debate moderator Megyn Kelly directed the first question of the cycle to Trump on his history of misogynistic comments.

Trump has established himself as the “real alpha dog," Coulter wrote in a January column praising her preferred candidate. “Monopolies can get arrogant and there does seem to be a little bit of arrogance here,” she said of Fox News' handling of the news that Trump had withdrawn from their debate in Iowa. “It’s not just that it’s smart alecky in how it treats Trump. It’s really insulting to voters.”

Coulter called out the conservative cable news giant for what she called its pro-amnesty and pro-open borders stance resulting in its anchors holding an anti-Trump bias:

It's true that Trump has focused his complaints about Fox News's coverage of him on the network's star anchor, Kelly. I assume he's using Kelly as a cat's paw for an attack against the entire Rupert Murdoch enterprise, which is implacably pro-open borders, pro-amnesty and, consequently, anti-Trump.

No one thinks Kelly was up in her office alone, furiously scribbling her questions for Trump. Before that first debate, there were stories all over about the whole Fox News team working on the debate questions.

But most people don't know who Murdoch is. Kelly is a star. By attacking her, Trump anathematizes the entire, pro-amnesty network.

One of the biggest problems facing the nation is that viewers think of Fox as the "conservative" network. If NBC or ABC were this spiteful to Trump, everyone would see it for what it is: political bias. Your enemies can never hurt you; only your "friends" can.

When South Carolina Governor Nikki Haley used her platform during the Republican Party response to President Obama's last State of the Union to warn against Trump's brand of xenophobia taking hold of the Party ahead of South Carolina's Republican primary, Coulter lashed out with her usual tactfulness, calling on the American-born daughter of immigrants to be deported to an unspecified land:

When Trump was criticized for encouraging violence from his supporters who encountered protesters at his campaign rallies, Coulter rushed to take credit for being the source of every Trump fan’s anti-Mexican rage and called for a “little more violence.”

John McCain is no war hero:

When Trump lashed out at Arizona senator and former Vietnam prisoner of war John McCain last fall, insisting he was actually no war hero because he was recklessly captured by enemy combatants, Coulter admitted that it was “dumb thing to say," but defended Trump by insisting that he “took it back right away.”

This week, Coulter admitted that, in her mind, Trump's diss of Heidi Cruz was actually more offensive than his comments about McCain, which she shrugged off as merely a "dumb joke that didn't work."