Manspreading is sexy now? New study says we actually love it when men — and women — take up more space 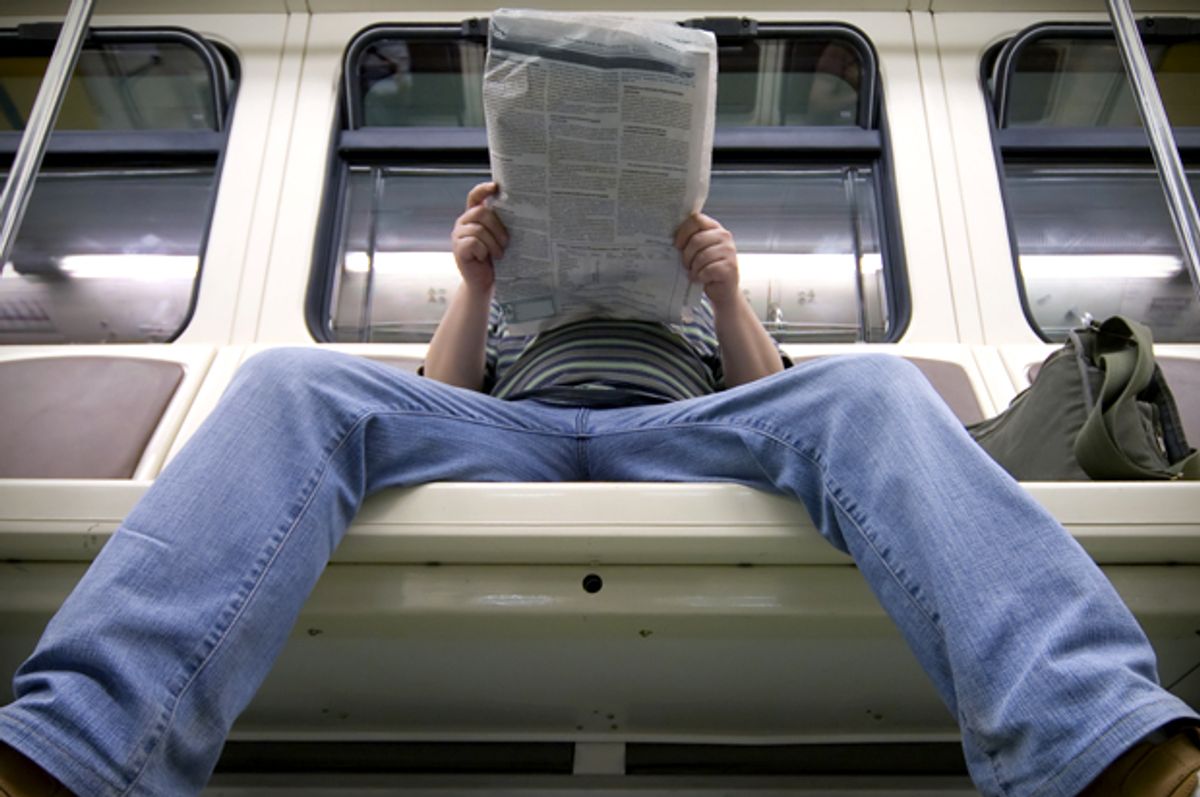 It’s rush hour on the train, and you’re busy trying to get to where you’re going just like the hundreds of other people also waiting on the platform. The weather is warming up, so the heat intensifies the scent of sweat and grime underground. Your feet hurt from the daily sacrifice you make for style, and you can’t wait for a cocktail and to kick the damn things off. Finally, the train arrives and things are starting to look up. A song you like plays through your earbuds, and the only thing left to do is find an empty seat and let go of the day. You spot an empty seat and make your way over. You sit down and feel yourself shrink and instinctively do whatever possible to become one with the wall. You do this because a man next to you is spread out -- manspreading -- and is effectively infringing on your personal space.

Are you annoyed, or do you swoon?

A paper published this week in Proceedings of the National Academy of Sciences involved two components focusing on postures that people find attractive in a potential partner. The team led by post-doctoral fellow Tanya Vacharkulksemsuk from the University of California, Berkeley, first examined 144 videos of speed daters and assessed the correlations between the videos and the ratings given by participants. Those who sat in space-consuming postures received higher ratings, nearly doubling the shot at a second date for both men and women who assumed the expansive pose.

For the second part of the study, researchers uploaded photos of people in either open or closed positions onto a dating website to see which attracted more interest. The team found that people in expansive postures received roughly 25 percent greater interest than those whose bodies were closed, but favored men. A whopping 87 percent of “yeses” came from photos featuring men with open postures, while 53 percent of women earned a “yes” when in the same pose.

As evolved as the human species has become, we’re still animals subjected to the whims of our own biology.

Vacharkulksemsuk conducted an additional test and found that people in the space-consuming -- ahem, manspreading -- position were perceived as more dominant and well-off. The abundance of space suggests a surplus of resources, an attractive quality from the hunter and gatherer age in human history that has survived to the present moment.

It’s understandable that the expansive pose would be considered attractive, even if anyone who does it on the subway is still a jerk. The pose suggests a certain level of receptiveness, an invitation to get closer. How likely are you to approach someone at a bar or a party who has their back turned to the crowd or their arms crossed? Open body language has long been recommended as a method to attract a potential partner.

It’s interesting that both men and women found the position attractive, and suggests a paradigmatic shift is underway. No longer is demureness as valued in women as it once was. It seems women are now more willing to take up space, and men are finding the authoritative position attractive.

In fact, a study led by biological anthropologist Helen Fisher and Match.com called “Singles in America” calls this phenomenon “the Clooney effect.” According to the research, 86 percent of men wish to find a woman who is self-sufficient and confident. This “new woman” takes after Amal, A.K.A. Mrs. Clooney, in that she’s independent, confident and self-assured, and damn proud to be. Although the playing field isn’t exactly equal (if only), these new statistics suggests that we might be moving in the direction of balance.

As far as the manspreading goes, I can see where it can be deemed attractive in certain contexts. But I draw the line at mansplaining sweet nothings in my ear.