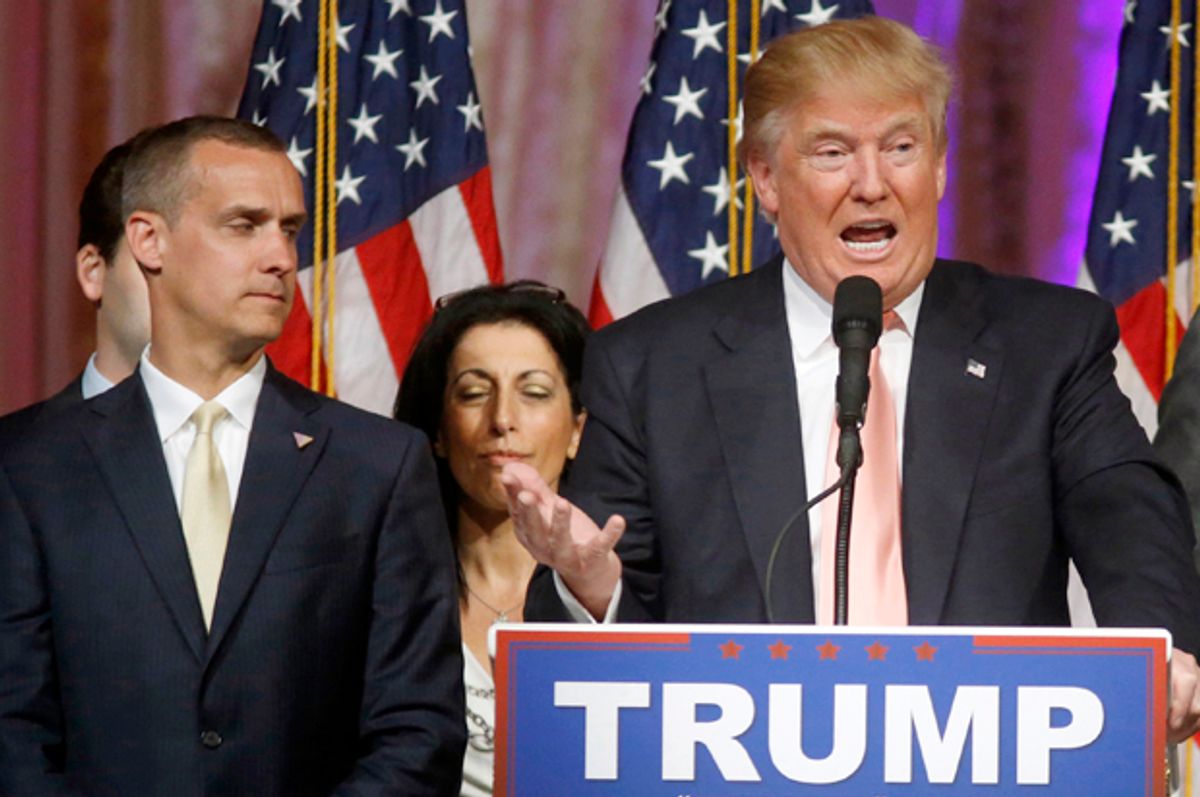 For feminists watching Donald Trump and his staff spin out a number of often contradictory excuses for Corey Lewandowski, who has been charged with misdemeanor battery in Florida for allegedly grabbing a reporter at a campaign event, it's impossible not to feel a sense of déjà vu. The spew of nonsense and what-ifs and counter-accusations sounds quite a bit like what happens any time you write an article or otherwise speak out about rape: You are immediately drowned in a pile of angry men minimizing rape, making excuses for rape, and arguing that there are times when forcing sex on unwilling women shouldn't count as rape. The problem is so aggravating that the Comedy Central show "Inside Amy Schumer" even did a sketch satirizing it.

To be clear, what Lewandowski is accused of doing is obviously not nearly as serious as rape, as the victim, Michelle Fields, would likely be the first to tell you. He's accused of grabbing her, so hard it caused bruises, but no one is saying that he caused her major trauma or anything. The seriousness of the crime — and the reason for pressing charges — stems from the context, both in terms of Trump's hostility to a free press and because of the violence he's been encouraging at his rallies. (Fields isn't the only reporter who's been roughed up at Trump rallies.)

But that's why it's all the more disturbing to see Trump and his team defend Lewandowski by using the same script that rape apologists use. It's yet another sign of the bone-deep misogyny that compels the candidate that this is his instinctual response to allegations that, on their surface, don't have anything to do with sex.

With that in mind, I've gone through the myriad of excuses the Trump camp has used, to compare them to the standard tropes that sexists use to minimize, deny, or excuse rape.

1) She's making it up! The first gambit, of course, is simply denying that anything happened and painting the accuser as a fabulist. Lewandowski tried this, of course, going as far as to claim he never even met Fields, a strange phrasing that comes right out of the rape denialist handbook.

2) She's exaggerating to play the victim! A favorite tactic of sexual abuse apologists is to sow fear that women are making mountains out of molehills. For instance, Rich Lowry of the National Review is fond of claiming that many sexual assault victims are just going into hysterics after some young and well-intended gentlemen tried to innocently steal a kiss.

Similarly, during Tuesday night's CNN town hall, Trump tried to argue that Fields had made more of the incident than it was. "When she found out that there was a security camera, and that they had her on tape, all of a sudden that story changed," he claimed. But, as Anderson Cooper pointed out, the initial statement from Fields — that she was yanked hard and it hurt but she didn't fall down — corresponds exactly to the video evidence.

3) Victims are just babies who need to toughen up! After establishing their belief that the forced sex was not as big a deal as the victim is claiming, the anti-feminist usually shifts into arguing that if women want equality, they need to learn to toughen up. Anti-rape activism treats a woman like a "delicate female" who has an "excessive need for protection," Katie Roiphe argued in her widely popular '90s era rape apology.

Trump played the same card during the town hall, saying Fields is "not a baby" and suggested that the only reason to press charges is an over delicacy that should disqualify her from being a reporter.

In reality, Lewandowski's actions are wrong even if Fields is a battle-hardened veteran who didn't feel a thing. Using violence to intimidate reporters it the issue here, not the delicacy of Fields's nerves.

4) It's not rape if they didn't fight back hard enough! From the same Roiphe piece: "Today's definition has stretched beyond bruises and knives, threats of death or violence to include emotional pressure and the influence of alcohol." While it's getting a bit better, you still hear this excuse a lot, that real rape victims go down kicking and screaming and if you don't, that should be treated as the equivalent of consent.

And sure enough, Trump used the same line against Fields: "To me, if you're going to get squeezed, wouldn't you think she would have yelled out a scream or something if she has bruises on her arm?"

5) You're going to ruin the reputation of a good man! As gross as it is, rape victims are often made to feel like they should protect the rapist with her silence, rather than ruin his wonderful life by exposing his dirty little secret. We saw an example in the Steubenville case, where multiple media outlets portrayed the rapists as simply overly jubilant young men whose "promising" futures were going to be ruined.

Trump, during the same press meeting: "I think it's very, very unfair to a man with a wonderful family, back in new Hampshire, who gets, what, a criminal situation, over that?"

6) Maybe they were raping each other! Did you ever think of that? Since so many rapists use alcohol to make it harder for their victims to resist, rape apologists like to pretend the problem is simply a couple of drunk people who had regrettable sex. "But when two drunken college students 'collide,' the male one is almost always presumed to be at fault," rape apologist James Taranto wrote in the Wall Street Journal. "His diminished capacity owing to alcohol is not a mitigating factor, but her diminished capacity is an aggravating factor for him." (In reality, most alcohol-related cases have nothing to do with women drunkenly consenting, but women who are unconscious or too drunk to resist but who most definitely did not consent.)

Trump's spin on this to claim that Fields and Lewandowski were just doing the same thing, but because the world is out to get men/conservatives/Trump supporters, only Lewandowski is being held accountable.

Victory press conference was over.
Why is she allowed to grab me and shout questions? Can I press charges? pic.twitter.com/qbW2RjkINX

Of course, just as no one is claiming that drunk but consensual sex is rape, no one is actually saying all touching, especially incidental touching, is assault. The issue here is that Lewandowski grabbed Fields' arm and yanked her, a deliberate action that is meant to control another person's body. Very different than casual arm touching.

Trump's willingness to lie and bullshit excessively is already a major concern, but the defense of Lewandowski is next level evil. The swift and shameless resorting to a sexist script crafted over generations by those who want to minimize and excuse rape is yet further evidence that Trump, and the people he surrounds himself with, just straight up hate women. It's hard to imagine a man who does something like this keeping up the White House anti-rape task force, that's for certain.