We've missed you, Michael Stipe: Is this "Tonight Show" David Bowie tribute the hint of solo projects to come?

The former R.E.M. frontman shows up on Fallon to toast Bowie and proves his voice and style are as strong as ever 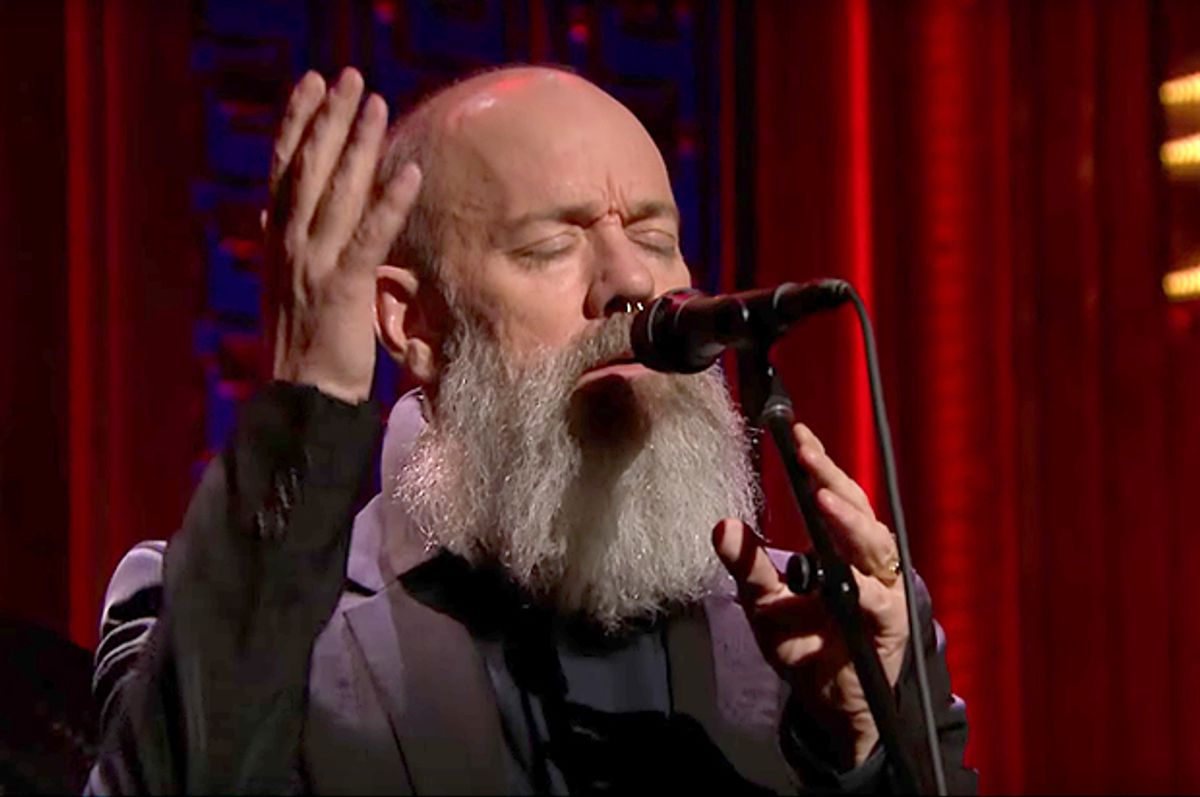 Besides being part of a group singalong to “We’ll Meet Again” that ended the 11-season run of “The Colbert Report,” Michael Stipe has not sung on television since R.E.M.’s 2011 breakup. He’s been scarce, in fact, in general. Last night’s appearance on “The Tonight Show” with Jimmy Fallon served as a reminder of how resonant a voice he still has, and for many fans, how much we’ve missed him, maybe without entirely realizing it.

After Fallon’s brief introduction, Stipe sang David Bowie’s “The Man Who Sold the World,” a tribute to both the late Bowie and to Kurt Cobain, who memorably covered the song with Nirvana.

There’s something about this song that benefits from being stripped down. Stipe sang accompanied only by a piano; the arrangement and playing evoked both classical minimalism and the impressionistic touch of Claude Debussy.

Stipe’s singing was low-key and reverent, without the vocal acrobatics he often used with R.E.M. (He does at one point go higher than we’re used to while singing the song’s title.) Gone is the mumbling and the slurring: It’s funny to remember that something that both admirers and detractors of Stipe’s old band used to debate was the way you could not hear the words. It had little in common with the enigmatic jangle of the classic R.E.M. song. But the reed-like voice is still as rich and fine as ever. At moments he could have been singing classical lieder.

Visually, today’s Stipe is almost the reverse of the one we saw when R.E.M. performed behind early records like “Murmur” and “Reckoning.” Instead of a wiry, loose-limbed singer with wavy hair and a baby face, the Stipe last night was stolid, rooted in place, with an entirely bald head and achievement beard. Instead of the T-shirts he sometimes wore in early shows, he sported a dark suit.

Bowie is a natural reference point for Stipe, though his old band’s music didn’t sound much like “Ziggy Stardust” or “Scary Monsters” or “Let’s Dance,” and the group didn’t trade in the kind of artifice or stagecraft Bowie was interested in: Its indie, college-radio ethos was very different.

Stipe’s tribute was also a prelude to a pair of Bowie memorial concerts in New York, at Carnegie Hall and Radio City Music Hall, that will include Stipe, Patti Smith, Blondie, The Flaming Lips, Esperanza Spalding, Pixies, Cat Power, Robyn Hitchcock, and many others. (The proceeds will go to Young Audiences New York, Little Kids Rock, Church Street School of Music, the Center for Arts Education, the American Symphony Orchestra and Grammy in the Schools.)

Part of the reason the return of Stipe’s voice is so welcome has to do with the band’s popularity and visibility waning for the last decade or so they were together. Rightly or wrongly, a lot of original fans drifted off with the band’s last few albums. Those recordings have their fierce advocates, and “Accelerate” got a very strong Rolling Stone review, but they didn’t get around very much. Much of alternative rock – or whatever we call this sort of thing now -- was slowly moving to the margins of the musical landscape. So a lot of us – I have to include myself here – have not listened closely to 21st century Stipe for a very long time.

R.E.M. was such a well-integrated band – sharing songwriting credits, avoiding instrumental solos, downplaying individual stardom – that it seems strange to think about Stipe as a solo artist. But his powers as an interpretive singer – he covered Neil Young’s “Old Man,” John Lennon’s “Imagine,” and a few of other songs at a Patti Smith show in November – are undimmed. Stipe is famously private, so we can only speculate wildly at this point. But here’s hoping that a solo music career will take Stipe’s complicated story forward.