When is a band not itself anymore?: As bands age and line-ups shift, fans get to decide 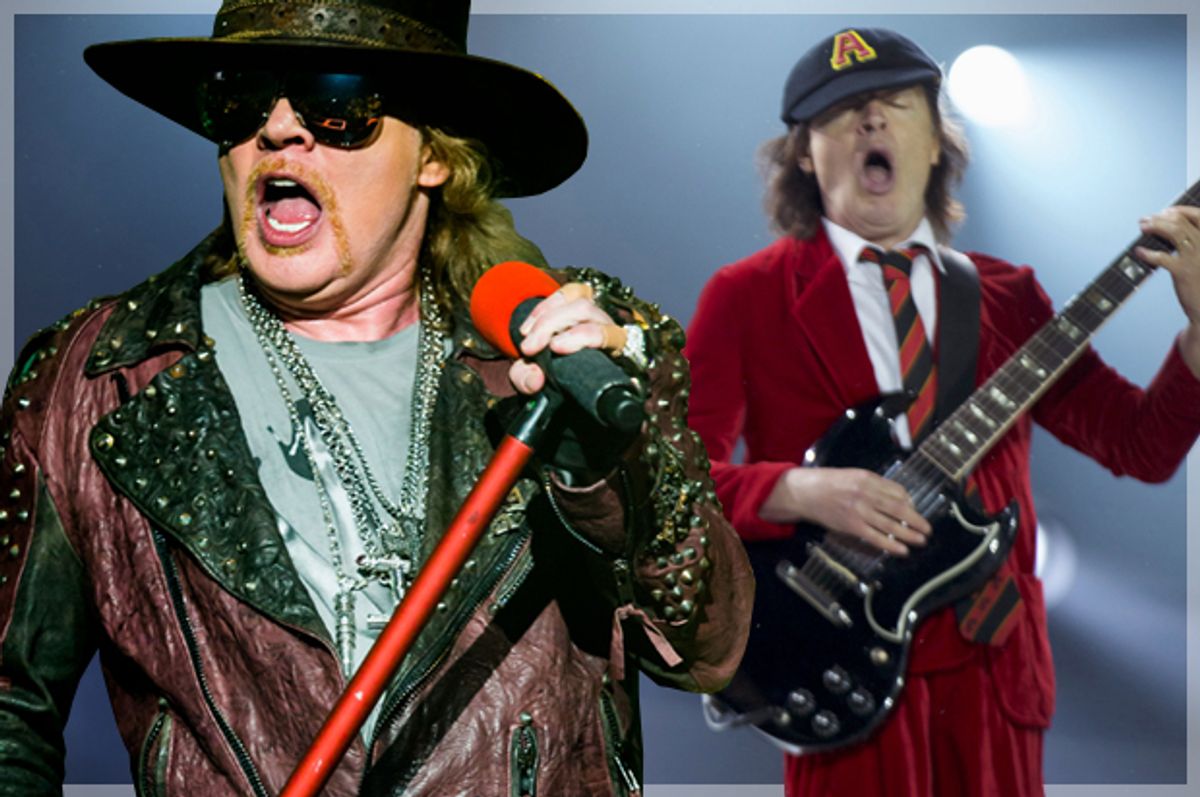 On this year's Grammy Awards, the surviving members of the Eagles joined up with Jackson Browne to perform "Take It Easy" in honor of Glenn Frey, who passed away in mid-January. In the aftermath of the tribute appearance, Eagles drummer/co-vocalist/co-founder Don Henley told BBC Radio 2 the performance was "very difficult and very emotional," and added, “That was the final farewell. I don’t think you’ll see us performing again. I think that was probably it. I think it was an appropriate farewell.” That Frey's death has apparently put the Eagles to rest is respectful to both fans and the group's body of work. However, calling it a day is an increasingly rare gesture: Losing a key member is frequently not a deterrent to established bands moving forward and continuing their touring and recording schedules.

The most notable recent example of this phenomenon is AC/DC, which postponed the remainder of a tour amidst frontman Brian Johnson's hearing problems, and then pledged to finish out the dates with a new vocalist. (Rumored, weirdly enough, to be Axl Rose, whose own band, Guns 'n' Roses, is embarking on tour dates featuring original members Slash and Duff McKagan.) Heavy metal legends Black Sabbath, meanwhile, have embarked on their final tour without drummer Bill Ward, amid accusations (and subsequent denials) that he couldn't handle the physical demands of the tour, while new Rock & Roll Hall of Famers Cheap Trick have toured with drummer Daxx Nielsen in place of Bun E. Carlos for years now. And then there's the reactivated At The Drive-In, which just started a tour without co-founder/vocalist/guitarist Jim Ward, whose sudden and unexpected absence was announced on Facebook long after concerts had been announced.

Of course, lineup changes aren't necessarily fatal to bands or their creative output. R.E.M. kept going after Bill Berry left the group in 1997, while Alice In Chains eventually regrouped with vocalist William DuVall assuming the lead vocal spot in place of the late Layne Staley. Death Cab for Cutie has soldiered on without core member Chris Walla, whose instrumental and production contributions shaped the beloved indie-rock group's sound, while Wilco leveraged early lineup turmoil for creative benefit. And it's not just rock band dealing with lineup instability, either: R&B troupe Destiny's Child weathered lineup changes back during its heyday, while En Vogue currently tours as a trio with two original members.

Yet for loyal fans, any substitutions are often dealbreakers: A Dallas Observer piece on ATDI's switch called the announcement "a big cheat to fans who looked forward to the return of all the main forces" and asked, "How is this any different from the projects that Bixler-Zavala and Rodriguez-Lopez have done together without [Ward], including De Facto, the Mars Volta, Antemasque and their solo records?" R.E.M. fans still argue about the band's output pre- and post-Bill Berry. In Cheap Trick circles, meanwhile, there are purists who refuse to see the band without Carlos behind the kit, while even the mere possibility of Rose fronting AC/DC has angered countless fans (especially those with tickets to the postponed shows). The ire is understandable: New lineup configurations often do change a group's chemistry, and an act is often greater than the sum of its parts: It isn't just the music, but also who performs those songs, that makes a band a band.

Yet the sheer number of classic and hard rock bands aging and potentially staring down retirement, as well as the ongoing popularity of reunions, has made upholding this black-and-white mindset more difficult. In fact, it's made the concept of band identity akin to a series of philosophical questions: At what point does a group performing under a certain name not actually have enough core members to be allowed to use the moniker? Which band members are essential to a group's success—and which can be replaced with no repercussions? Who gets to choose or define when a band performs under a particular name? When is it acceptable for bands to use their names, despite having mostly non-original (or recognizable) members?

These questions are quickly becoming non-theoretical. Due to co-founder Mick Jones' health problems, Foreigner has done some tour dates in recent years without him, meaning the group was performing with no original members. The current lead vocalists of hard rockers Quiet Riot and Warrant have done time in the groups Love/Hate and Lynch Mob (respectively), while Ratt and Survivor have gone the opposite route and now have significantly younger lead vocalists: The latter's singer is 21-years old, while the former's frontman said at a recent concert he was a year old in 1985, meaning he was born the year Ratt's "Round & Round" was a hit. And Blackfoot's Rickey Medlocke and Revolting Cocks' Al Jourgensen sent their respective bands out without them in recent years, leveraging a new lineup and name recognition for notoriety.

Swapping players in and out has certainly been a common practice in classic and hard rock circles for years: Journey has cycled through several lead singers since Steve Perry left the group in the '80s, while Lynyrd Skynyrd regrouped in 1987, a decade after the devastating 1977 plane crash that killed frontman Ronnie Van Zant and guitarist/vocalist Steve Gaines. But more and more, the genre seems like it's on a path where bands are becoming franchises—a name brand with interchangeable players rather than a specific, recognizable group of musicians. At the moment, Ratt counts only drummer Bobby Blotzer as a golden-era member—and while the band sounded strong and note-perfect at a recent live show, the overall experience felt like going to see a well-oiled tribute band rather than the real thing.

The idea of an entertainment entity being a franchise has precedent, of course. In book publishing, the practice of having series authors cede to ghostwriters and multiple writers is a common one, as evidenced by Ann M. Martin ("The Baby-Sitter's Club") and Francine Pascal ("Sweet Valley High"), while Carolyn Keene (the "Nancy Drew" mysteries) was always a pseudonym. TV shows—and not just soap operas—also often have characters drop in and out. Yet it's a discomfiting experience applying that same concept to a band: Loving someone's music is a far more personal experience, as band popularity is often predicated on the personalities of the individual players. Loyalists aren't (usually) idolizing an idealized, fictional character, but relating directly to the real person behind the stage persona. Assuming that fans will automatically warm to (or push aside) those sorts of personal connections because the music trumps all is somewhat insulting. Band names shouldn't be in air quotes.

Reunions are a slightly different animal because there are more factors contributing to lineup configurations. Still, it's often good enough these days to have most of a group's core/preferred lineup involved. Sometimes this is out of necessity: Dreampop group Lush has recruited Elastica drummer Justin Welch for their reunion, as original drummer Chris Acland committed suicide in 1996, while Slim Dunlap couldn't take part in the Replacements' reunion due to severe health problems. Of course, the latter group is no stranger to lineup shuffling—original guitarist Bob Stinson was out of the band in 1986—and Bob Mehr's new biography, "Trouble Boys," noted that Dunlap gave his blessing to the recent 'Mats reunion, which featured original members Paul Westerberg and Tommy Stinson.

That 'Mats reunion tour didn't feel incomplete or insincere, which underscores just how subjective band identities can be: One person's sham is another person's transcendent experience. And on one level, it's hard to fault bands for wanting to push forward and perform beloved songs for eager fans, even if things aren't the exact same way they used to be: There's nothing like hearing a hit single or a moving song performed live, and the financial benefits of the concert industry are tough to turn down or push away. In the coming years and decades, it's clear the very essence of music—and the boundaries delineating and defining bands—are poised for some potentially seismic shifts.