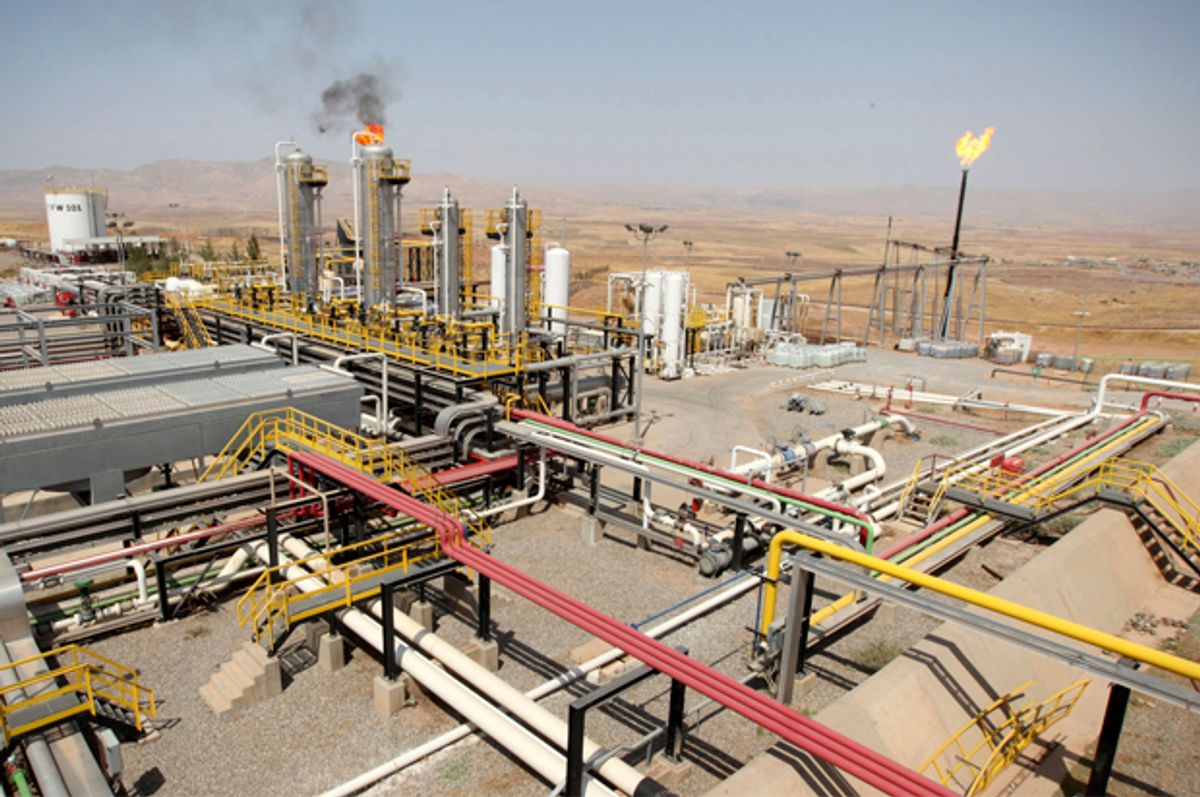 Unaoil is the most important company you've never heard of. It is at the heart of an enormous international bribery scandal, involving some of the world's most powerful corporations.

According to an explosive new investigation, the company thrives on corruption, fueling inequality and helping destabilize natural resource-rich conflict areas in the Global South.

The interactive report "The Bribe Factory" details how Unaoil exploits the widespread corruption in many oil-rich nations, based on company documents obtained by the Huffington Post and its Australian partner Fairfax Media.

The little-known firm portrays itself as a lobbyist and convinces Western corporations that they will not be able to get contracts without its help. After charging multinationals multi-million dollar fees, Unaoil bribes government officials in oil-rich countries in order to get good deals for these companies.

Some of the corporations involved in this multi-billion dollar scheme were aware that they were participating in bribery, but looked the other way. By presenting itself as a verified middleman, Unaoil ensures "plausible deniability" for the companies.

Unaoil, which is based in Monaco, the tiny country on the southeastern edge of France, is run by the wealthy Ahsani family.

A pantheon of powerful multinationals are implicated in the bribery scandal, including weapons corporations like Halliburton and its former subsidiary KBR, along with technology firms like Samsung and even car companies like Rolls-Royce and Hyundai.

It also involves a slew of lesser known but influential corporations based in the U.S., the U.K., Italy, Germany, the Netherlands, India, Australia, Malaysia, South Korea and Spain.

American and British bankers are additionally part of this web of money laundering, and the Ahsanis operate a property investment business in London.

These findings are the result of a six-month investigation conducted by reporters at the Huffington Post and Fairfax Media, who were leaked hundreds of thousands of leaked emails and documents from the Ahsanis.

The media outlets are releasing their findings in three parts — one on the Middle East, another on the former Soviet Union and the final on Asia and Africa.

Unaoil and its subsidiaries have operated in a vast array of conflict zones in the Middle East and North Africa (Iraq, Syria, Libya, Yemen, Iran, Tunisia, the UAE and Algeria), the former Soviet Union (Kazakhstan and Azerbaijan) and sub-Sarahan Africa (the Congo, South Africa, Cameroon and Angola).

The Ahsani family denied to reporters that it is engaging in illegal behavior like bribery, but its own emails show otherwise.

Unaoil has "almost perfected the art of corruption," the reporters write. "The trove reveals how they rub shoulders with royalty, party in style, mock anti-corruption agencies and operate a secret network of fixers and middlemen throughout the world’s oil producing nations."

For almost a decade, Unaoil has been certified by an anti-corruption agency, which "raises serious questions about the worth of such international accreditation," the reporters note.

Meanwhile, "many of those revealed to have been culpable, including the wealthy Ahsani family itself, which runs Unaoil, continue to operate with impunity."

The first part in "The Bribe Factory" series focuses on corruption in oil-rich countries in the Middle East and North Africa.

The investigation shows how corruption in the oil industry helped fuel conflict in the region.

Documents "reveal how Unaoil carved up portions of the Middle East oil industry for the benefit of western companies between 2002 and 2012," and "expose the betrayal of ordinary people in the Middle East," the reporters explain.

After the U.S. led an invasion of Iraq in 2003 — which the U.N. explicitly said was illegal — and toppled Saddam Hussein, it claimed it would use the country's enormous oil reserves to benefit the Iraqi people. The evidence suggests the exact opposite is true.

Unaoil documents show how Western corporations worked with Iraq's new elite in "a sustained campaign of looting." The company paid at least $25 million in bribes. Government officials got large kickbacks and, from 2004 to 2012, Unaoil "influenced a Who’s Who of the country’s oil industry," from the deputy prime minister to the oil minister and beyond.

Next door in Iran, the corruption continued. Corporations worked with government officials to make large deals. The bribery even extended outside of the oil industry to the head of Iran's police.

Before NATO overthrew it in 2011, Unaoil also made shady deals with officials in the Libyan government, guaranteeing oil and gas contracts for multinational corporations.

The same was true in Syria, where Unaoil helped British oil company Petrofac secure deals with the government.

Unaoil greased the wheels in Western-allied Gulf states as well, working with governments to garner lucrative contracts. In Kuwait, the company bribed a powerful official whom it referred to as “the big cheese.” In the UAE, Unaoil worked with an official with links to the Crown Prince of Abu Dhabi.

Since then, Iraq, Libya and Syria have been plunged into chaos. U.S.-backed wars destroyed the governments of Iraq and Libya, and a five-year civil war has reduced much of Syria to rubble.

A scholarly study released in 2015 found that foreign governments are 100 times more likely to militarily intervene in oil-rich countries.

The authors of "The Bribe Factory" argue furthermore that this institutionalized corruption in the fossil fuel industry also contributed to the destabilization that was only exacerbated by foreign militarism.

"By aiding the corruption of already-distrusted regimes and accelerating the flow of money and resources out of poor countries, Unaoil and its partners were risking far more than fines and criminal penalties," the reporters write. "They were creating political instability, turning citizens against their governments, and fueling the rage that would erupt during the Arab Spring — and be exploited by terrorist groups like al-Qaeda and the Islamic State."