Yes, Susan Sarandon is guilty of blind privilege: Why her comments about Trump & "the revolution" are so wrong 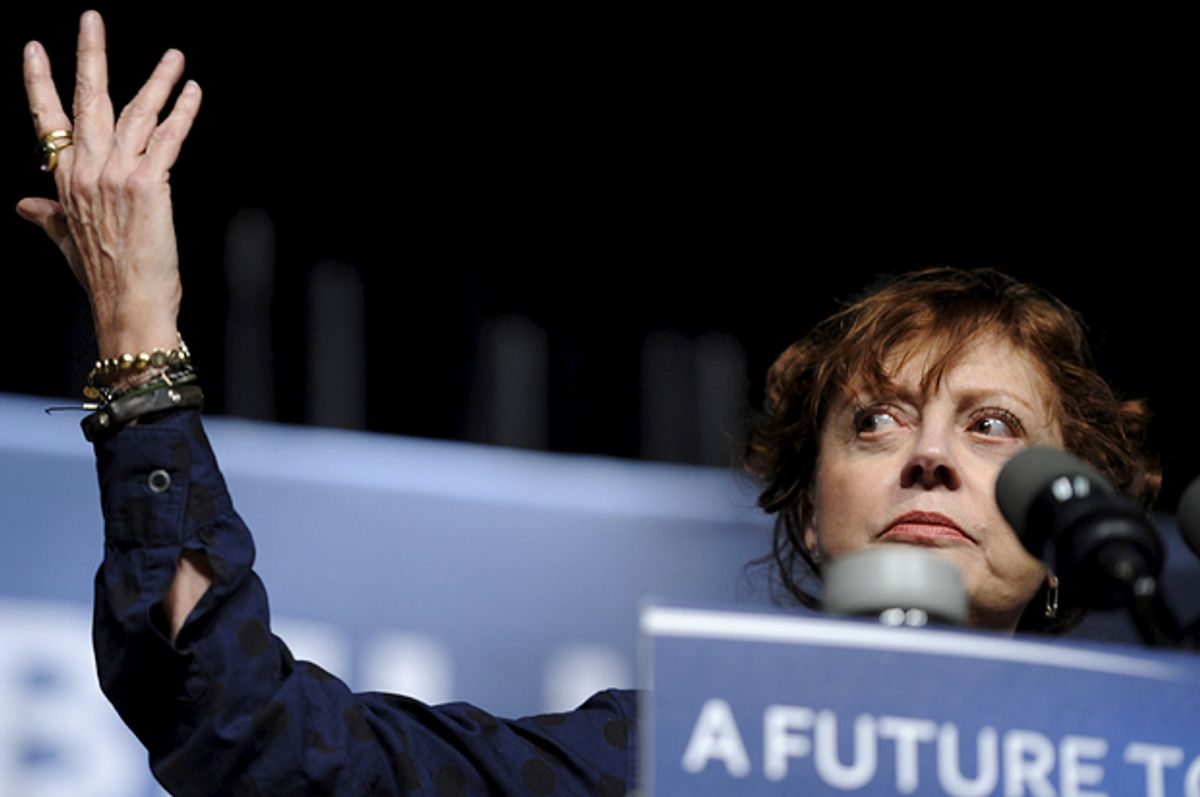 By now you've probably watched or heard about the clip of Susan Sarandon on MSNBC's "All In with Chris Hayes" in which she implies that it'd be acceptable for Bernie Sanders supporters to either stay home or vote for a third party candidate if Hillary Clinton wins the Democratic nomination. And if your reaction was anything other than disgust and bewilderment, you're doing it wrong. Susan Sarandon certainly is.

Before we continue, I hasten to note that I like Sarandon a lot. She's a sharp, talented, smart actor. Her politics are slightly to the left than mine, but for the most part we agree on the issues. Actors and celebrities have just as much latitude to speak out publicly on issues of the day as any of the rest of us -- Hollywood actors are citizens, too, after all. But for Sarandon -- or anyone else, for that matter -- who thinks it's a clever idea to allow a Republican, likely Trump, to be elected in November as a means of more rapidly achieving Bernie's political revolution is as deluded as they are privileged.

Just in case you missed it, here's how it all went down on MSNBC.

SARANDON: I think Bernie would probably encourage people to [support Hillary if he loses] because he doesn't have any ego in this thing. But I think a lot of people are, 'sorry, I just can't bring myself to [vote for Hillary].'

HAYES: How about you personally?

SARANDON: I don't know. I'm going to see what happens.

SARANDON: Really. It's dangerous to think we can continue the way we are with the militarized police force, with the death penalty and the low minimum wage and threats to women's rights and think you can't do something huge to turn that around. The country is not in good shape if you're in the middle class. It's disappearing.

There are so many things wrong with this exchange, it's difficult to know where to begin.

1) Sarandon is a public figure with considerable influence. Therefore offering a get-out-of-jail-free card to Bernie supporters who think it's wise to allow a Republican to become president in lieu of Hillary Clinton is, putting it mildly, irresponsible. Like her or not, Sarandon is a woman with political clout, and Bernie supporters who might be feeling the slow onset of heartbreak as Bernie's window to the nomination closes are very likely to take her seriously and let the general election chips fall where they may.

2) No matter how we parse the issues, there's simply no chance in any universe that Trump is somehow more palatable than Hillary. Bernie supporters might not like her or where she stands on a handful of issues, but no candidate is flawless. Bernie, for his part, voted against closing the military prison at Guantanamo Bay, for example. His record on suing gun manufacturers is also a potential sticking point with the ideological purity crowd. Bernie also pledged to continue President Obama's Predator Drone program, for the most part. Meanwhile, as much as Bernie people might dislike Hillary on certain issues, she will, at the very least, successfully block the GOP from repealing Obamacare, along with the majority of Obama's legacy. If Trump is elected, 20 million people will lose their healthcare when the Affordable Care Act is repealed. The Supreme Court will be stacked with paleoconservatives for another generation. And who knows what kinds of military engagements he's liable to get into.

3) Sarandon is predicating her entire philosophy here on one very big assumption -- that, somehow, four years of Donald Trump would move America closer to Bernie Sanders's revolution than a Democratic president would, because things would become so bad that voters would finally come to their senses and come to support democratic socialism in all its glory.

In addition to, you know, risking World War III, allowing Trump to become president would damage the economy and international relations to the point of embarrassing the United States on the world stage, while bankrupting millions, and killing tens of thousands more. Before Obamacare, which Trump would repeal, Harvard determined that there were as many deaths from a lack of health insurance as there were on 9/11 -- every month. Trump will take us back to that. Likewise, millions of minorities in America, be they Muslim or Mexican, could be rounded up and treated like prisoners. Yes, maybe there'd be a revolution at the tail end of this hellscape, but (1) we don't know for sure, and (2) what sorts of madness would have to take place to get there.

The alternative is electing a competent Democrat who would at least maintain and in some cases improve upon the progress that's been made so far, allowing another chance at this so-called revolution on another day -- without destroying everything in the process.

Indeed, Sarandon's theory is the personification of privilege.

Will Susan Sarandon be personally impacted by any of this? Perhaps a little -- maybe -- but nowhere near as badly as the families whose sons and daughters will be marched off to a Trump war to defend the integrity of his stupid combover. Sarandon likely won't lose her health insurance and be bankrupted due to obscene medical bills. Sarandon might not realize that millions of Americans with health insurance under Obama have received it due to the Medicaid expansion. So much for the bottom 90 percent that Bernie talks about at his rallies. And what about access to affordable abortion services, which would continue to be eroded under Trump? So much for that.

Sarandon has millions of dollars between her and poverty. She's the one percent, and perhaps that's why she's not troubled by the idea of using poor and middle class workers as human shields in her plan to get to achieve a revolution.

Beyond Sarandon's rant, reality mandates that anyone who's politically left-of-center needs to vote with the bigger picture in mind. A hundred years ago, when the parties were more interchangeable and compromise was an accepted part of the game, voting one's conscience was fine. Today, allowing a Republican extremist like Trump or Cruz to win the presidency by refusing to vote or by casting a protest vote is objectively reckless. It shows a total disregard for the millions of Americans who would be literally destroyed by a GOP president. Your personal political agenda is not nearly as crucial as helping to maintain an electoral bulwark against an apocalyptic Republican victory, and the only way to achieve this is by voting for the Democratic nominee. Even Republican voters have a responsibility to make sure Trump, in particular, isn't even allowed to take the White House tour much less occupy the Oval Office next January.

The stakes are too high, and throwing a temper tantrum at the polls will only bring about the worst case scenario. Nothing more.