Anti-choicers, you're not fooling anybody: Now they're trying to exploit Donald Trump's gaffe by pretending their misogynist views are "moderate"

Anti-choicers are using Trump's comments to portray themselves as nicer to women, but in fact, they are worse 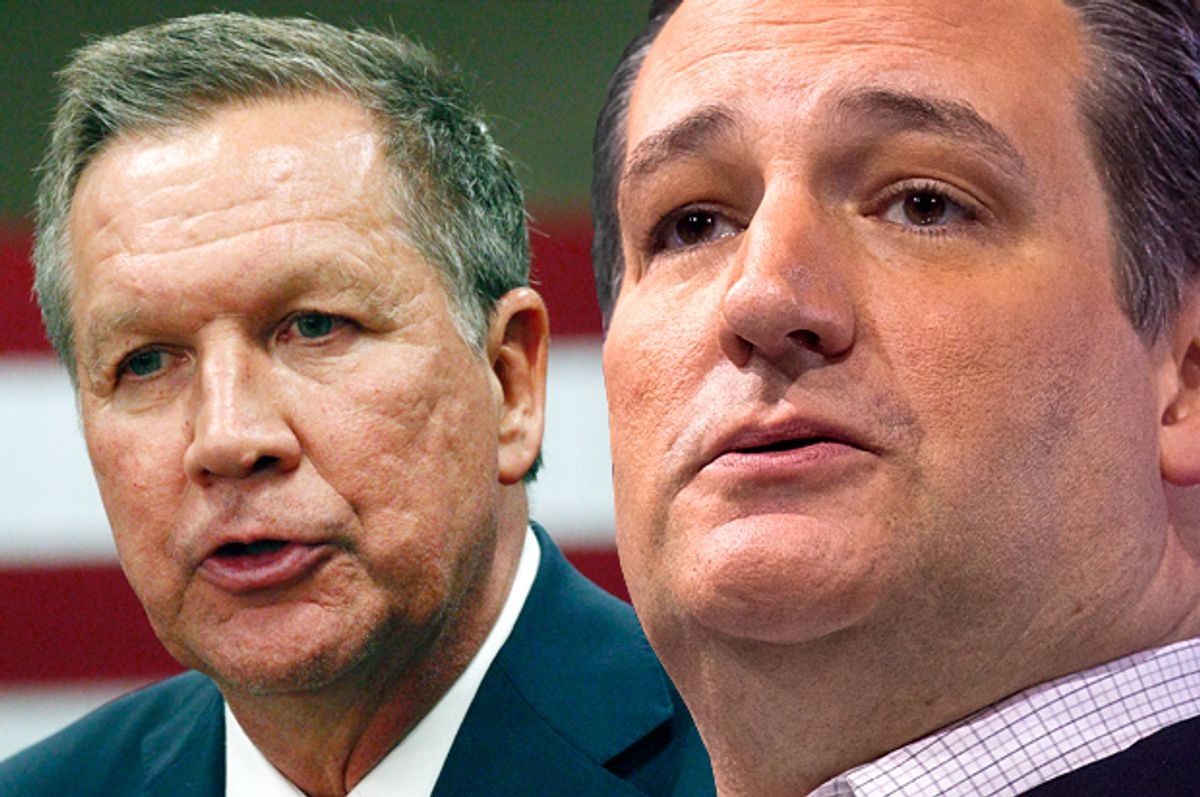 On Wednesday, Donald Trump caused a lot of outrage by saying there should be "some form of punishment" for women who have abortions. But while the outrage is understandable, what he said pales in comparison to the wickedness of the response from every other anti-choice politician and organization that responded to it, who all used this as an opportunity lie their fool heads off, pretending to be compassionate and more moderate than Trump.

But in reality, the rest of them are way, way worse. And by taking their feigned poses of outrage at Trump's comments at face value, the media is letting anti-choicers get away with hoodwinking the public about the seriousness of their misogyny and the huge amounts of suffering they want to dish out to women to punish them for having sex. Compared to the rest of the "pro-life" community, Trump is a pussycat.

It was depressing watching anti-choice politicians and activists use Trump's comments to propagandize about how they're kind, gentle souls who have no ill will towards women, a preposterous stance coming from people who literally want to force women to endure unwanted childbirth.

When Todd pushed him on how you enforce this ban without, you know, enforcing it, Kasich gave a non-answer:  "Well, look, I think it’s rape, incest, life of the mother, and you build some restrictions around it." But he wiggled around explaining exactly how you enforce those restrictions when women, invariably, decide to abort anyway.

"On the important issue of the sanctity of life, what’s far too often neglected is that being pro-life is not simply about the unborn child; it’s also about the mother — and creating a culture that respects her and embraces life," Cruz's campaign statement read. "Of course we shouldn’t be talking about punishing women; we should affirm their dignity and the incredible gift they have to bring life into the world.”

This is the trick the anti-choice movement is trying to pull: Claiming that forcing a woman, against her will, into giving birth is somehow respecting her and affirming her dignity. Because nothing says "dignity" like being told you're nothing more than an incubator whose own life, desires, and autonomy don't matter at all.

Look, Donald Trump hates women. But Kasich and Cruz hate them more. Trump at least gives women a small amount of credit for being able to make decisions. Kasich and Cruz literally talk about women like they are extremely feeble-minded, quite literally too stupid to know that they all want to be having babies all the time, and just need Papa Misogynist Bible-Thumping Dirtbag to force them into their supposedly true desires.

But anti-choicers are using Trump's comments to frame as "moderate" the deeply misogynist view that women are too stupid to be allowed to decide against giving birth.

"But let us be clear: punishment is solely for the abortionist who profits off of the destruction of one life and the grave wounding of another," the anti-choice SBA List said in a statement.

And March for Life chimed in:

No pro-lifer would ever want to punish a woman who has chosen abortion. This is against the very nature of what we are about. #prolife

As did Americans United for Life:

Pro-Life Americans Agree -- the woman another victim of abortion industry -- should not AND have not been prosecuted https://t.co/Pg98YmFWJc

These statements are offensive on two levels. One, they are lies, full stop. As I noted on Wednesday, anti-choice policies are about making the procedure more expensive and miserable than it has to be, which is clearly intended to punish. Indeed, anti-choicers have been concocting creative and malicious ways to add legal penalties to abortion, leading to situations where parents of teenagers who get abortions are being threatened with arrest and doctors who provide abortions or research fetal tissue are being subject to legal harassment. And yes, some women are going to jail for abortion.

Two, even if they weren't lying, the implication of this stance — that a woman who chooses an abortion can simply be assumed not to know what she is doing — should chill us all to the bone. It's far uglier with much worse implications than anything Trump said.

After all, if you really believe women are that stupid, it's hard to imagine you think they are capable of making any other decisions or handling anything with cognitive demands besides pouring a bowl of cereal. To look at your life and decide if it's good or bad to have a baby right now for you is a pretty basic decision. It might be emotionally taxing, but on an intellectual level, it's not that hard. Research shows that women who have abortions are pretty clear about their reasons, as this table from the Guttmacher shows: According to these anti-choice groups and Republicans like Kasich and Cruz, women simply aren't smart enough to understand basis concepts like "having a baby makes going to school harder" or "tying myself to a man who I'm not interested in marrying is a bad idea".

If you think women are too stupid to understand really basic concepts like that, then it's hard to imagine you trust women with decisions that require more cognitive abilities: Voting, going to school, holding a job. To really embed, into law, this notion that women are simply too stupid to be trusted with straightforward decisions like abortion is a terrifying notion. What other rights will be taken away on the grounds that women just aren't smart enough to handle the responsibility?

Well, actually, the answer is pretty clear: They're coming for contraception next. Anti-choicers have been quietly chipping away at contraception access, using "religious liberty" as a feint to attack insurance coverage of birth control and using abortion hysteria as cover to defund family planning clinics like Planned Parenthood that offer affordable birth control to women who often can't get it elsewhere. At the same time, they haven't given up efforts to dismantle sex education and replacing it with classes that "teach" that there is only one option and that option is abstinence.

The belief that women are simply too stupid to be trusted with choices has already expanded beyond the abortion choice. The choice to have sex in the first place is already viewed with suspicion by conservatives.

Anti-choicers are eagerly using Trump's statement to push the idea that there's something "compassionate" and "moderate" about their belief that women, as a class, are mentally inferior and cannot be trusted with the full slate of human rights. They should not be allowed to get away with this and need to be called out for the deep misogyny of this view as much as Trump was called out for his punish-women stance.