Back to "Back to the Future": The ride is gone, but the film's cross-generational appeal holds

'80s nostalgia buffs love it, and so did Ronald Reagan — even though the movie made him a punchline 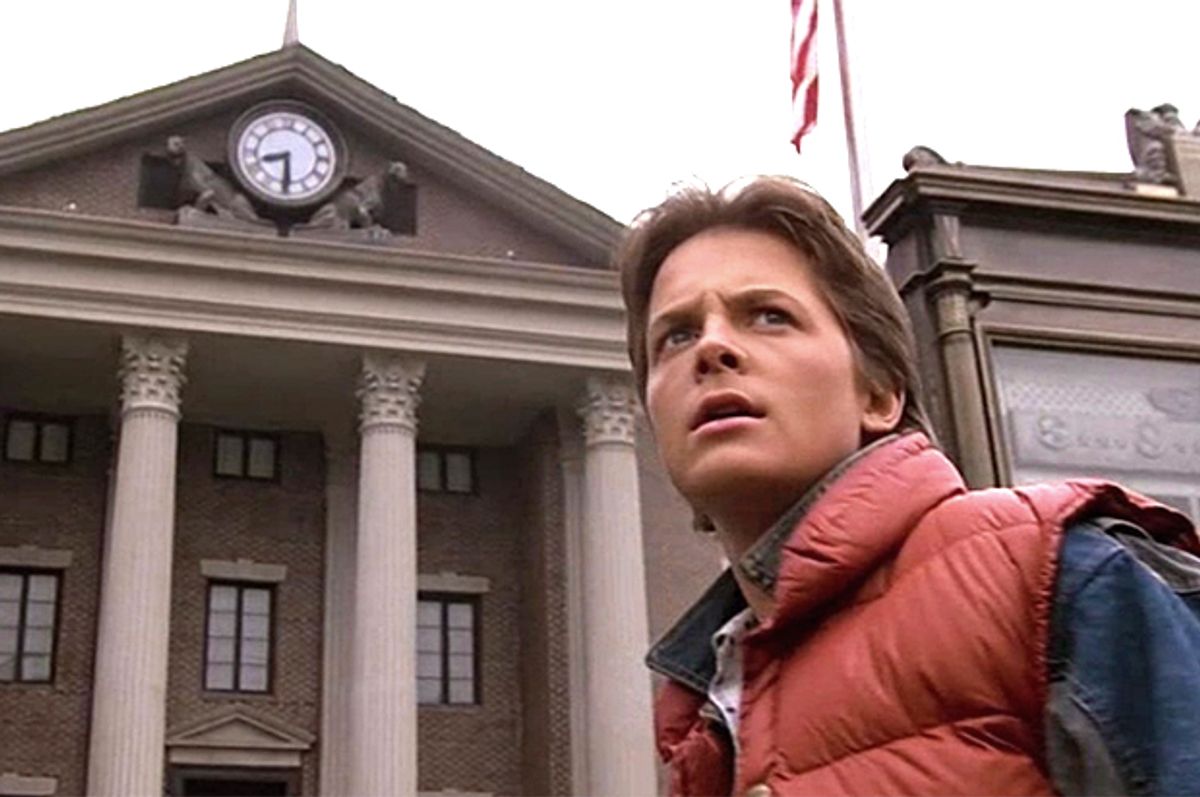 Michael J. Fox in "Back to the Future" (Universal Pictures)
--

Why should anybody but nostalgic Gen Xers care? The Robert Zemeckis movie was certainly popular when it came out, topping the box office for almost three months and drawing good reviews. But it’s become far more than it seemed to be at the time. For a film that felt like it was mostly entertainment -- a lightly comic, action-filled movie for teenagers -- it’s turned out to be endlessly open to interpretation. It sort of offers something for everyone.

It’s now a kind of totem for the ‘80s and a political reference point. Pretty good for a film featuring one of the most impractical cars ever designed, a mother falling in love with her son, and music by Huey Lewis and the News.

Why has the 1985 film endured so strongly, and why is it a shame that those DeLorean rides are disappearing? The filmmakers envisioned a number of elements that ended up growing over time: “Back to the Future” had some of the earliest skateboarding in an American movie, appearing just as skating was exploding outside California. It has terrorists (Libyan, in this case), which puts it in line with 21st century fears. And technologically, it was ahead of its time: Nike will release self-lacing shoes that resemble those in the sequel. The title is also endlessly flexible for headlines.

But part of what makes the film worth revisiting – and not just at nostalgic events like last October’s celebration of “Back to the Future Day” – is the way it's spoken to conservatives.

It’s not that the movie had explicitly conservative politics. It even took a gentle jab at Ronald Reagan -- "Ronald Reagan? The actor?! Then who's vice-president – Jerry Lewis?" Doc Brown exclaimed when Marty told him who was in the White House in 1985 – but Reagan loved the film’s optimism. Reagan later kidded about the joke and quoted from the movie. "Never has there been a more exciting time to be alive, a time of rousing wonder and heroic achievement,” he said in his 1986 State of the Union Address. “As they said in the film ‘Back to the Future,’ 'Where we're going, we don't need roads'."

The film, in fact, has become a reference point for conservative politicians. Marco Rubio ran an ad last October called “Back to the Future.” Carly Fiorina was even more explicit, with her commercial “Doc Brown Needs Your Help!” using a voice like Christopher Lloyd’s and asking voters to help her change the future. (Liberals, of course, like it too.)

The 1980s scenes in the film show the town run-down and dreary in contrast to the bright and chipper 1950s scenes -- matches the rosy view that many Republicans have of the Eisenhower era.

The movie also shows the kind of by-your-bootstraps racial self-help that conservatives preach. The character Goldie Wilson appears as a busboy at Lou’s Café, but in between the ‘50s scenes and the film’s 1985 present, he has enrolled in night school, moved into politics, gotten elected mayor. It’s a liberal dream of racial progress, along with a conservative one: Goldie never asked the state for help, preaches "Honesty, Decency, Integrity" -- the "decency" is the giveaway here -- and runs on a platform of lower taxes. And whatever the problems in the film’s ‘80s scenes, racism is not depicted as a serious one: This is film in favor of racial progress, but also sees most of the racial problems as being in the past.

(The film’s complicated racial politics also show up near the movie’s end: The movie’s climactic scene, with Marty McFly playing “Johnny B. Goode” on guitar, is a lot of fun… until the film suggests that Chuck Berry got the song and his signature duckwalk from a white kid. The filmmakers surely didn’t mean anything explicitly racist here, but still. And I’ll leave out a discussion of the sexual assault scene, which gets a fascinating reading in this Jamil Smith piece.)

“Back to the Future” is nothing if not deliciously ambiguous. So a movie made by “liberal Hollywood” that conservatives enjoy and often reference? Maybe the next place for the “Back to the Future” ride, now that it’s being taken down in Osaka, should be the Reagan Library in Simi Valley?

American Politics Back To The Future Movies Universal Studios