Even a cartoon Trump is no joke: Colbert's mock interview shows how dominant the GOP frontrunner has become 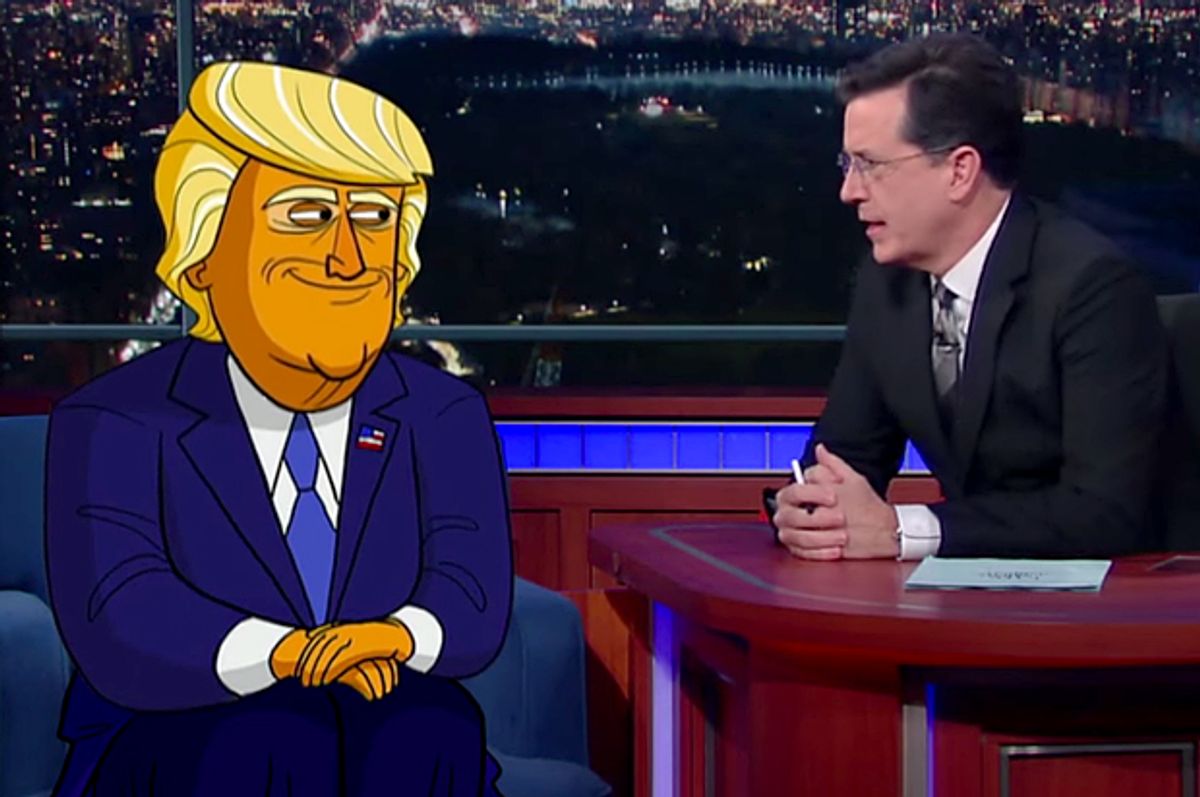 If you work in television or the news media, you may be wondering how to deal with Donald Trump. Do you talk about him – how smart he is, how dangerous he is, whatever – or do you ignore the controversial statements he drops in what seems to be a calculated move to dominate the news cycle? It’s sort of an unsolvable problem. If the “synergy” of news and entertainment means celebrity candidates get, effectively, free exposure, how do you make sure you’re not over-covering someone? And if you believe the political process should be about discussing potential leaders based on their policies, how do you keep the things that matter at the center of the conversation?

Stephen Colbert, one of the best of the political commentators on television and the best interviewer of politicians on late-night TV, has a new answer to these questions, and it's both funny and a bit troubling. No longer do you need to book the candidate himself on the show. You don’t even need to get him to call in (a practice Trump has taken full advantage of.) You don’t even need to impersonate him, which the mostly apolitical Jimmy Fallon has done hilariously.

Now, Colbert shows us, a cartoon Trump will do. Last night, an animated version of the mogul appeared on “The Late Show” – swooped yellow hair, pursed lips and all -- calling Anderson Cooper a “dumb dumb,” threatening to bring legal action, and generally acting like a spoiled child. Here’s how THR recounts it:

When Colbert told him that his response was "a little immature," cartoon Trump responded: "I know you are, but what am I? Stephen, I am rubber, you're glue, I have a lawyer and I will sue."

When Colbert argued that he had seen the tape and it looked to him that his campaign manager "grabbed a reporter roughly," cartoon Trump countered, "No, he didn't infinity. That settles it, it totally settles it. I settled it in the best possible way ever."

In the end, cartoon Trump gave in a little bit. "Maybe he did it, but she started it."

Overall, it was pretty funny.

The problem is that every time we laugh at how funny Trump is – and every time someone like me writes about it – the candidate gets more exposure. Does the kind of thing drive votes? It’s hard to know. Some people find him annoying. Some find him scary. But the more attention he gets, the more dominant he’s become. To a lot of people, his ideas – and his tone – resonates.

The best argument about the way the blending of entertainment and politics has changed things for the worst comes from Matt Bai, whose book about the Gary Hart campaign, “All the Truth is Out,” seems more and more important.

Recently, a bunch of commentators — among them the president of the United States — seem to have latched on to the idea that the media is culpable in enabling Trump’s antic march to the Republican nomination. In the New York Times, my former colleagues Nicholas Kristof and Jim Rutenberg have both written columns in the past week asking whether we, as an industry, need to be more accountable.

Bai then describes the speech Hart gave after being caught in an affair in 1987.

“In public life, some things may be interesting, but that doesn’t necessarily mean they’re important,” Hart said, decrying a process that he said reduced reporters to hunters and candidates to the hunted.

“And then after all that, ponderous pundits wonder in mock seriousness why some of the best people in this country choose not to run for high office,” Hart went on. “Now I want those talented people who supported me to insist that this system be changed. Too much of it is just a mockery. And if it continues to destroy people’s integrity and honor, then that system will eventually destroy itself.”

This may sound a little earnest and nostalgic, I’ll admit. But it certainly matches some of what we see in the presidential race these days, at least on the Republican side. Instead of hunting for scandal, the media has turned the race into a punchline.

The bottom line is that Trump has beaten us all. Whether he wins the election or not, he has managed to colonize our minds. Who’s fault is it? Well, there’s a lot of blame to go around, and pundits are discussing this fiercely right now. Besides the commentariat, reporters have rolled over for the Trump campaign by allowing themselves to be penned in like cattle, as this Media Matters piece points out. The destruction of equal-time regulations hasn't helped. An economy that's created pain for a lot of working-class people has also led to Trump.

Every time we talk about Trump, joke about Trump, or put him on late-night television, he wins. Even if he's a cartoon. This billionaire feeds on the attention and watches his speaking fees and book advances go up. The more measured people who might enter politics take a step back. And liberals laugh at the jokes.

But what to do? Can we ignore him? At this point, we’re all caught in his web. The press and media need to rethink its policy for the next campaign. For now, it’s Trump’s world – we just live in it.